A Day in the Sun 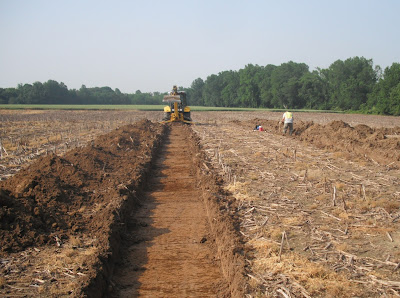 I was back in Delaware today for another day of backhoe work on a small farm site dating to around 1800. The last time I did this I had a crew of five but we found next to nothing and spent most of the day standing around. This time I took only one person to help me but (of course) we found lots, so it was a hard day of digging and scraping in 90 degree heat. What we did was map the features we uncovered and then dig out a section from each, to find out what they were and whether they contained interesting artifacts. 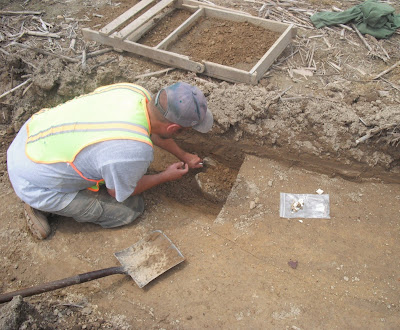 We dug a little section of this amorphous pit and found several sherds of Creamware -- the invention that made Josiah Wedgwood rich -- and Pearlware, a nice circa 1800 collection. 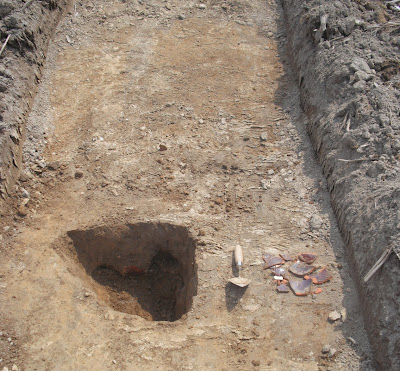 This was was packed full of broken cobbles, but amongst them were those sherds from a coarse redware jar. 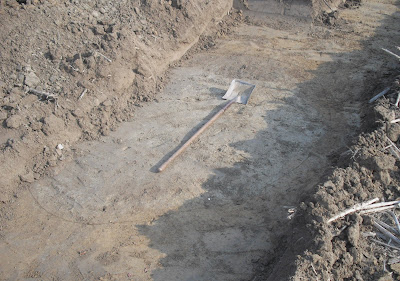 And there was this thing. Nine by ten feet (3.0 x 2.75 m), roughly round, filled (on top) with gray clay that must have been dug up at least a hundred feet away. 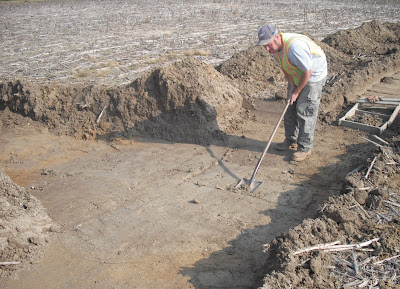 I had my colleague Paul start digging into it, thinking it would either be shallow or turn into a well, and either way we would be done in an hour. 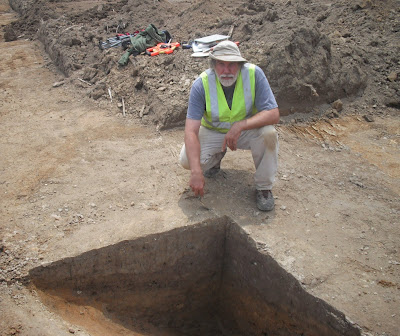 But we worked on it all day. It turned out to be three feet deep (nearly a meter), with sloping sides; if the rest is like the segment we dug out, it comes to a sort of point on the bottom. The lower half of the fill is a mix of sand and yellowish brown clay, not as unusual as the gray clay on top but still something different from what was dug out of the hole in the first place. We only found about a dozen artifacts, but that was enough to show it dates to the same period as the farm site.

What is it? I have no idea. Why would somebody dig out this large hole, which doesn't have the right shape to be a cellar or a storage pit or anything else I can think of, only to fill it in with dirt from somewhere else? Where did the dirt that was in it go?

Any day with a mystery like this one is a good one for me, even in the middle of a shadeless field at 90 degrees.
Posted by John at 7:33 PM