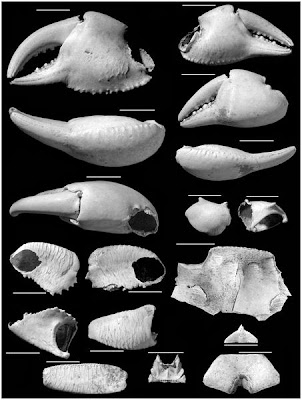 Wherever we humans go, we kill things. The latest from the literature is "the first land crab extinction of the human era," the disappearance of Geograpsus severnsi from the Hawaiian Islands after people arrived:

The loss of the crab likely greatly impacted the ecology of the Hawaiian Islands, as land crabs are major predators, control litter decomposition and help in nutrient cycling and seed dispersal. Their disappearance was caused by the arrival of humans to the islands and resulted in large-scale changes in the state's ecosystem. Researchers said the full impact of the extinction on Hawaii is unknown, but they are certain it led to changes in the diversity of the food web, a continuing concern to conservationists studying species loss in other habitats. . . .

"If these land crabs were alive today, Hawaii would be a very different place," said lead author Gustav Paulay, marine malacology curator at the Florida Museum of Natural History on the UF campus. "They certainly were major ecological players, as they were very abundant, large, carnivorous omnivores."

Numerous fossils of the new species, Geograpsus severnsi, have been found on the major Hawaiian Islands for many years, but its identity was not clear. Researchers identified the crab by comparing physical characteristics with specimens from various collections. The species is unique to the Hawaiian Islands and the most land-adapted crab in the Pacific, expanding further inland and to higher elevations than any other. Like other island land crabs, G. severnsi appears to have retained ties to the sea, where its larvae developed.