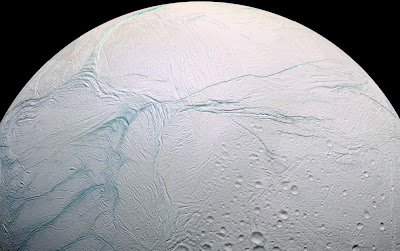 Or send a robot, anyway:

Saturn's icy moon Enceladus is emerging as the most habitable spot beyond Earth in the Solar System for life as we know it, scientists said last week at a meeting of the Enceladus Focus Group at the SETI Institute in Mountain View, California. . . . "It has liquid water, organic carbon, nitrogen [in the form of ammonia], and an energy source," says Chris McKay, an astrobiologist at NASA's Ames Research Center in Moffett Field, California. Besides Earth, he says, "there is no other environment in the Solar System where we can make all those claims".

Better yet, geyser-like jets spew ice crystals and gases into space, allowing a spacecraft to sample the subsurface by flying overhead. The current Cassini mission has done that several times already, but it's only equipped to find the building blocks of life, not more complex molecules. "We want biomarkers," says Larry Esposito, a planetary scientist at the University of Colorado, Boulder.

But no, we're sending more rovers to Mars. Where there isn't any life and never has been. I have to say, though, that I am sometimes puzzled by the conventional thinking of astrobiologists:

First, though, it's necessary to figure out what to look for. That begins by figuring out how Earth-like organisms might survive in Enceladus's underground lakes, ponds or oceans, where there is no sunlight and so no photosynthesis.

Why "earth-like" organisms? Why couldn't life on Enceladus be completely different? I understand that life of any sort is likely to rely on the common, highly reactive elements -- carbon, nitrogen, oxygen, hydrogen, sulfur -- but those elements can be put together in many, many ways.
Posted by John at 8:22 PM