Who Owns a Korean Statue that has been in Japan for 700 Years? 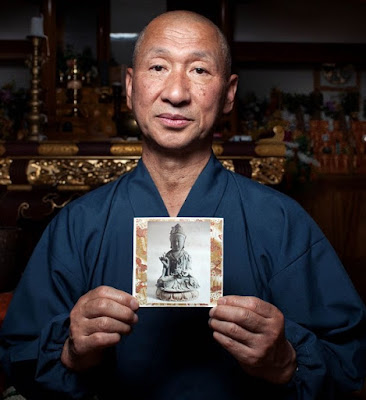 
A court ruled Thursday that a South Korean temple can have a Buddha statue that was stolen from a Japanese temple in 2012, on the grounds that it had been taken from Korea centuries earlier by Japanese pirates.

Japan called the ruling “regrettable” and urged the statue’s return. The dispute is being closely watched by both governments, whose relations are often roiled by historical disputes.

The 20-inch gilded bronze statue was taken from a Buddhist temple on Tsushima, a Japanese island halfway between the two countries, by South Koreans who also stole another statue from a Shinto shrine there. The thieves were caught while trying to sell the artifacts in South Korea, and the statue from the Shinto shrine was eventually returned to Japan.

But a South Korean temple, Buseoksa, which says the Buddha statue was made there in the 14th century, won a court injunction in 2013 preventing its return until it could be determined whether it had originally been brought to Tsushima legitimately.

The statue, of the Buddha in the lotus position, has been in the government’s custody since then, and on Thursday a district court in Daejeon, a city south of Seoul, ruled that it should be given to Buseoksa. The government, which was the defendant in the civil suit, did not say whether it would appeal.

Upbeat monks at Buseoksa, in the west coast city of Seosan, prepared for the statue’s homecoming. The temple’s chief monk, the Venerable Wonwoo, hailed the ruling as a milestone that should inspire South Koreans to try to bring home what he claimed were 70,000 ancient Korean artifacts that had been looted and brought to Japan. Buddhists and other South Koreans have rallied behind Buseoksa’s campaign.

The Japanese temple, Kannonji, was not a direct party to the lawsuit, but it argued at the trial that the statue had not been removed from Korea illicitly, noting that there had been legitimate trade in goods, including Buddha statues, between Korea and Tsushima in ancient times. The statue has been designated an important cultural asset in Japan.

Here's a crazy idea. Why not agree to share the statue?

Japan gets it for a couple years, then Korea gets it for an equal period of time, and then repeat. They can even make a big ceremony out of the exchange and turn it into a tradition, in effect becoming a symbol of reconciliation and shared Buddhist values outweighing pettiness and human weakness.

Yeah, I know. It makes way too much sense. No one will ever agree to it.

I think that's a great idea.