The Death of a Leftist Gadfly

British art critic John Berger has died at 90, which makes me regret (briefly) getting rid of the copy of Ways of Seeing I was once forced to buy. If I had it handy I could produce pages of irritating text to illustrate his profound obnoxiousness.

But somehow ended up back at the starting point, liking art that has been popular for centuries and offering not the barest suggestion of how things might be different in the future.

Berger's catalog of sins begins with pretending that he was raised in the working class, when really his father was a bureaucrat and his parents sent him to a mid-level public school – that is, an expensive private academy. When this was pointed out to him he responded that he hated the place, read anarchist tracts instead of doing his school work, and left it as soon as he could, dropping out to enter art school. So, you know, he was working class in his heart, or something. In art school he discovered that while he was clever with words he was hopeless at painting, so he switched to criticism. He spent decades attacking whatever was popular at the moment, including both artists I hate (notably Jackson Pollack, accused by Berger of wallowing in the decadence of our culture instead of trying to get out of it, which I think is spot on) and those I love (e.g., David Hockney). He was constantly complaining that "traditional" art criticism ignored social context and mostly celebrated work that exalted royalty and aristocracy. I can imagine a worldly court painter – say, Hyacinthe Rigaud – responding, "Non, Monsieur, I am exquisitely sensitive to social context, which is why I paint kings instead of peasants." That so many Marxists have gone around for so long announcing the aristocratic bias of the artistic tradition as a great new discovery still baffles me. Marx and Engels covered it pretty well, and what they left out Walter Benjamin did to death.

But having said all that, what then? Once we have established (and this was more than a century ago) that the great artistic traditions are all aristocratic (equally true everywhere, from Japan to Peru) and that notions of artistic quality are very much rooted in the culture as a whole, where do we go from there? Isn't it the critic's job to point in some different direction? But other than Frida Kahlo, the first artistic choice of every anarchist, the artists Berger championed were very much part of that same great tradition: Rembrandt, Vermeer, Velázquez, van Gogh, etc. If artistic standards are just expressions of class and culture, how is Rembrandt better than Pollack? Insofar as I remember his book, Berger offered no answer but infuriating leftist word salad and proclamations of a never-defined "new way of seeing."

Berger also wrote novels, one of which won the Booker Prize, so maybe there was more to him than the criticism I find so annoying. But I feel compelled to note Berger's famous attack on art history because these issues are still very much alive. Each new generation of undergraduates discovers anew that the artistic tradition is sexist, racist, aristocratic, and so on, and some of them go online to announce their great discovery to each other, making old cynics yawn. As we put those prejudices behind us we get, not some sort of artistic democracy, but the current art world, which I would say is every bit as elitist as Michelangelo's in its own weird way. Our high culture mixes up old-fashioned elitism with art world insiderism, contempt for the masses, pseudo-leftist politics, proclamations of trendy identities, and so on, and I do not see how any of that is a better basis for art than aristocracy was. Indeed millions of educated leftists feel to their chagrin that it is worse; it seems highly unlikely that any of our trendy art will be as admired in 500 years as Shakespeare or Rafael. 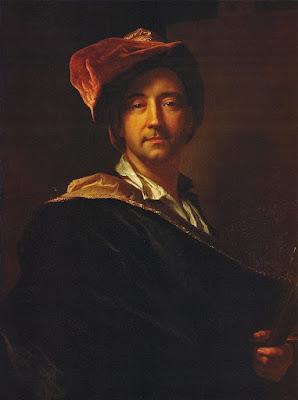 Hyacinthe Rigaud may have been a professional flatterer of kings and cardinals, besides sexist, racist, imperialist, and dripping with scorn for the peasantry (I don't know about the last four, although they seem safe bets), but his paintings are glorious. And if your theory of art can't cope with that, then your theory is bunk.

George Orwell and T.S. Elliott once had a brief magazine argument about the future of poetry. Elliott wrote that great poetry had always emerged from an aristocratic culture devoted to refinement as an end in itself, and was therefore doomed in an age of democracy and mass culture. Orwell responded that Elliott was right about the past, but as for the future, nobody could predict what new forms of art might arise, and what new sorts of tradition might develop. That is the optimistic way to think about art. We may have lost the confidence of past generations that pure beauty exists and can be found, but we have an art scene of great variety and fervor, shooting off in a hundred directions. If much of it is dreck, well, that was true in the 17th century, too. We cannot compete with the Renaissance or the Tang Dynasty in self-assurance or serenity, but our huge, diverse art world has its own great vitality, drawn from the traditions of the whole world. Instead of whining about capitalism and finding a few old masters to celebrate, an art critic should hunt out and promote what is exciting and beautiful in the art of our own age. John Berger did not.

This is what I meant about undergraduates making this "discovery" over and over again:


Holding that dog-eared copy in my hands today, the book still seems to shiver with revelatory power. For many Berger fans, Ways of Seeing represents the first time a book trusted them to see past the appearance of things. It’s a book about art history and the media, but it’s also a magic trick. Berger takes his readers beyond the visible, towards a closer understanding of the world as it really is—the one capitalism, patriarchy, and empire try to hide from you.

And what are the revelations that made this poor reader shiver with their power?


In this small work, Berger gives a basic primer on the complicity of the European art tradition from 1500 to 1900 with the politics of the same period.

Art is political! What an astonishing idea! And not only that:


Berger explains the difference between the painted nude—seductive, objectified—and the naked human being. He tells us that still-life painting did not depict objects qua objects, but as items to be owned. European conventions on perspective, he argues, offer the world up to the covetous viewer with a deference found in no other tradition. Berger points out that the globe hovering behind Holbein’s The Ambassadors refers to incipient empire and so to racist violence.

MY GOD PAINTED NUDES ARE DIFFERENT FROM NAKED PEOPLE!!! CAN YOU BELIEVE THE DEPTH OF THIS MAN'S INSIGHTS???

But it's really the crap about perspective and the covetous gaze that is the perfect John Berger line: portentous, inflammatory, nonsensical. Yet to a certain sort of 19-year-old it all shivers with revelation.
Posted by John at 9:19 AM

So did Berger ever comment on pieces of so-called "low art", the sort of stuff actually produced outside the context of society's elites?

Did he critique the works of newspaper cartoonists, or comic book illustrators? Did he appraise the merits of street art like murals and graffiti? Did he ever notice or care that millions of people around the world constantly make their own art for their own enjoyment or self expression, in nearly every medium imaginable, both tangible and even intangible in the modern digital age?

The sort of person who can only perceive art if it is to be found in fancy galleries and in certain preset forms and mediums is bound to think like Elliott - that as the modern age distances itself from aristocracy, "refinement" will disappear, and art will cease to be great. But every established art form was at one time new and unfashionable, and only by virtue of becoming popular and accepted did it become "refined". Anything can become an "art form", so long as it received enough support.

A fine example is the Japanese medium of Ukiyo-e, where the lowest social order of merchants (considered even beneath peasants in Japan) birthed an artistic movement that would sweep the entire nation, derived from crass commercial woodblock printing and featuring "unrefined" subjects like geisha, sumo, and kabuki actors. Yet despite these humble origins, the tradition went on to create such instantly recognizeable and globally iconic artistic images as Hokusai's The Great Wave off Kanagawa. Moreover, Ukiyo-e directly influenced the works of European painters like Van Gogh, Monet, and other famous "refined" figures of art.

Most people will never in their lives see the painting in person. They will never be able to look at it in high detail, up close, able to see or appreciate the individual strokes of the brush, to recognize the technique and skill that went into making it. They will never have any idea who the woman in the painting was, or what the world she lived in was like, and frankly they don't care. She's just an oddly recognizeable face, divorced from all context or meaning. She's an icon, a logo, a bizarre shibolleth of our shared "Western Culture". She's as much as piece of "refined art" as Mickey Mouse or The Jolly Green Giant.

But is that really a problem? To figures like Elliott, yes, I'm sure that appraisal would leave them aghast. But art is completely arbitrary. Taste is utterly subjective. What you find beautiful and moving, someone else centuries removed will find ugly and revolting.

We today may look upon Michelangelo's David with pleasure and awe, while someone in the future (or from the distant past) might look upon it with boredom, or disdain, or snide amusement, or countless other responses. Pick up David and plop him down in the center of a major Aztec city, and he'd look just as alien and bizarre to them as much of their art looks to many of us. Or transport him to old India and watch the locals scratch their heads in befuddlement, wondering why anyone would find such a statue impressive when (in their minds) it pales in comparison to the glories of monumental works like the Ellora Kailas Temple, or the Kanchi Kailasanathar Temple.

There is no objective truth or beauty. Art is simply what pleases us to create and to reflect upon.

So, you don't like Berger. Okay. But I know, from having read your blog for a while, that you don't reject examining works of art -- and other things -- in their social contexts. Do you reject the various lenses of "new criticism" altogether, or do you just think Berger a particularly bad critic?

What I find particularly annoying about Berger is his insistence he was engaged in a radical project to discover a "new way of seeing," which turned out to be just politics plus random impressive-sounding words, and that he always ended up vary close to the opinions of the tradition he claimed to reject. I mean, who was ever a more commercial, capitalist painter than Rembrandt, whom Berger praised to the skies? So what was the point of all that political criticism and new way of seeing if you just end up with the same judgments?

And yes, I think he was a bad critic; that stuff about perspective and capitalist acquisition is utter nonsense.