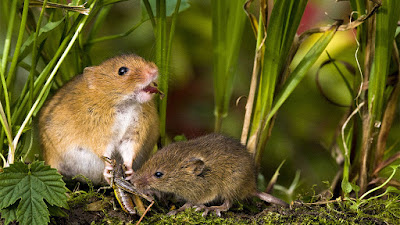 I'm not sure I've ever seen a teaser link that beats this one, and it comes from Science:

It's part of the ongoing saga of manipulating mouse brains by stimulating neurons with lasers, which has previously been used to make them thirsty or afraid and even (maybe) to plant memories.


One moment, a mouse nonchalantly shares a cage with a cricket; the next, the rodent leaps on the insect and rips its head off—all because a scientist flipped a switch. For the first time, researchers have hacked into the part of the brain that makes animals hunt, using lasers to target specific neurons. What’s more, they’ve found this hunting center in a surprising place: the region of the brain responsible for fear. . . .

Fear in mammals is controlled by the amygdala. So it is quite striking that the right sort of stimulation in the amygdala triggers the whole hunting sequence: stalking, pouncing, biting, eating. Which started me wondering about humans and our complicated emotional relationship to the killing of other animals. In many societies, the killing of an animal has been the supreme religious act, and I have always thought that must mean it triggers a range of powerful emotions all at once.
Posted by John at 8:18 AM

Fascinating. It's interesting that ancient sacrifice rituals were often accompanied by elaborate formulae of parceling out, cooking, and feasting--as if the point were to transform the fear-rage-Thanatos emotions of the kill into the pleasure-fellowship-Eros emotions of the feast. The latter is all that many of us experience when we order a steak in a restaurant; it's as though the animal never existed. Is not this part of the essence of modern Middle Class life? To allow the enjoyment, while separating one as much as possible from the morally compromising acts that permit it?

Except many sacrifice rituals existed in cultures which hunted little, making sacrifices out of harvested grain or domesticated pasture animals instead.

Also, is it reasonable to assume that hunting or killing animals was viewed as morally compromising? There is much to suggest that historically, much of humanity was vastly less sensitive to violence of all kinds, but particularly against animals (at least in certain traditions, and for a variety of reasons).

Humans are perfectly capable of killing and butchering and not caring about it. Whether it's the case that we are naturally sensitive and our ancestors simply had no option but to become desensitized through experience in order to survive, or whether our sensitivity is a modern development can be debated, but I'm not sure that's important. What matters is that even today, all it takes is exposure to and normalization of the acts (or near complete isolation from them) and they no longer seem morally compromising - even if, from a philosophical standpoint, they are.