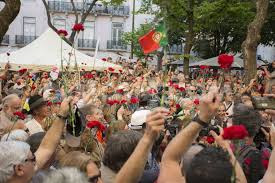 Mário Alberto Nobre Lopes Soares, one of the architects of Portugal's transition from dictatorship to democracy, has died at 92. The military government, the so-called Estado Novo, was declared deposed by military officers who launched a coup on 25 April, 1974. But the coup might well have failed had not the announcement brought a huge number of civilians into the streets of Lisbon and other cities to celebrate the fall of the dictatorship and defend the new government with their bodies. They faced down soldiers loyal to the regime and famously put carnations in their gun barrels, which led to the whole event being called the Carnation Revolution.

Now that fascism seems so far behind us, it is easy to forget how turbulent Portugal and Spain were in the 70s, and how near a thing the establishment of democratic rule was. After the 1974 coup Portugal was led by a council of mostly military figures, who were supposed to be guiding a transition to democracy but actually devoted most of their energy to giving up Portugal's African colonies. Those colonies (Mozambique, Angola) were caught up in low-level wars with nationalist guerrillas that had ground down the Portuguese army; these wars, and the refusal of the old regime to give up its colonies, were one of the main causes of the coup. Then the transitional council was ousted by another coup of communist officers backed by the USSR; and then the communists were ousted in yet a third coup by CIA-backed "pro-democracy moderates." Actually they turned out to be pro-democracy moderates, but given the CIA's record of backing all sorts of "moderate, pro-democracy" thugs in places like Chile, I use the quotes to emphasize how uncertain this all seemed at the time.

Into this chaos stepped Soares and other like-minded civilians. Soares had been jailed repeatedly by the old regime but he still comes across as more of a deal-maker than a revolutionary. He helped write Portugal's new constitution and became head of the Social Democratic Party and then the first post-coup prime minister. His main achievement in power was basically to keep the country going; giving up the colonies was expensive and traumatic, there were still plenty of military officers and ordinary people who liked the old regime and wanted it back, and the economy had been pretty sad even before all this trouble. Soares has been pilloried ever since for overspending, inflation, corrupt deals, and so on, which are all true but not entirely his fault. The old regime had controlled the economy by putting key parts like banks in the hands of regime supporters, with the government or its political parties as secret partners, and unraveling those deals and reforming the nation's businesses as publicly-held corporations generated windfalls for the lawyers and so on who handled it; but surely that would have happened in any system. Yes, he ran big deficits, but in his mind that was necessary to get the nation past the crisis. During his first term Soares never even had a majority in Parliament, since the large Communist Party hated him and voted against all his measures on principle, leaving him to make deals with right-wing parties on every issue.

His achievement, as I said, was to survive, and thus to keep democracy going for long enough that the people began to believe it would endure. He was not a hero, just an ordinary politician. After fifty years of self-proclaimed military heroes, that may have been exactly what Portugal needed.
Posted by John at 9:01 AM