The Lansdowne Throne of Apollo 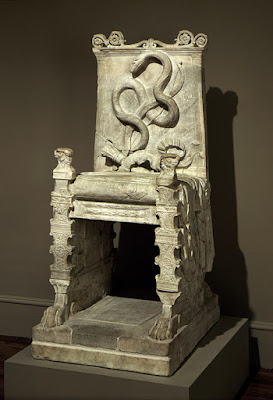 This famous marble throne was excavated in Italy in the eighteenth century and purchased in 1798 by William Petty Fitzmaurice, the first Marquess of Lansdowne. It remained in his noble family until 1930, when his reduced descendants sold off their whole collection of classical art. They buyer of this piece was William Randolph Hearst, who then gave it to the Los Angeles County Museum of Art, where it still resides. Unfortunately you can't see it; for unexplained reasons it is "not on display." 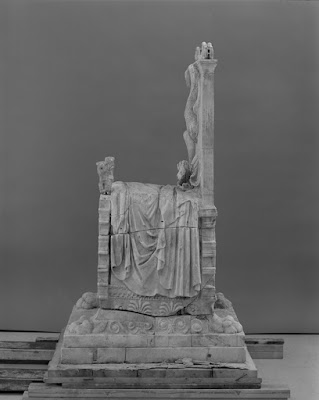 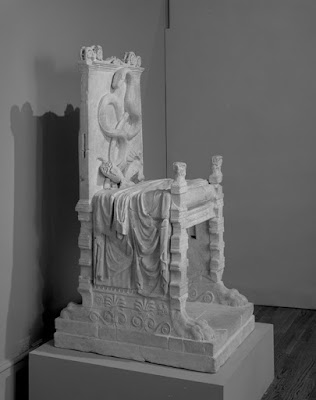 There is now no information about exactly where this came from, some everything about its history is speculation. It is dated on stylistic grounds to between 50 and 100 CE. Most experts agree that it was never intended to be sat on, and therefore that it comes from a temple or other ritual context. The detail of the carving on the seat and the back is still in good shape, so it is certain that it never was sat on very much. It is carved with symbols of Apollo – his bow and quiver and a serpent that probably connects to the Python and thus to his temple at Delphi. Indeed some historians think it may be a copy of a Delphic throne. 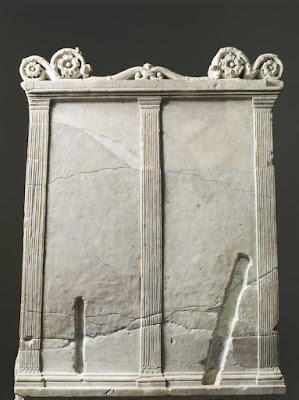 I wondered if it might be fake, which would explain why it is no longer on display, but if there are theories to that effect the internet doesn't seem to know about them. So, an amazing object, a fascinating and mysterious survival of Roman religion.
Posted by John at 7:15 AM