The Escape of the Abraham Crijnssen 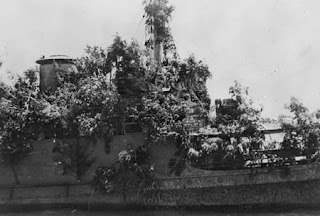 The Abraham Crijnssen was a Dutch minesweeper based at Surabaya in the Netherlands East Indies when Japan invaded in 1941. The Japanese wiped out most of the allied fleet in the two battles of the Java Sea and Sunda Strait in late March 1942. All surviving allied ships were then ordered to withdraw to Australia. The crew of the Abraham Crijnssen found themselves alone, with the seas controlled by the Japanese Navy, the air controlled by Japanese planes. They carefully planned their escape:


To avoid detection by Japanese aircraft, the ship was heavily camouflaged with jungle foliage, giving the impression of a small island. Personnel cut down trees and branches from nearby islands, and arranged the cuttings to form a jungle canopy covering as much of the ship as possible. Any hull still exposed was painted to resemble rocks and cliffs. To further the illusion, the ship would remain close to shore, anchored and immobile during daylight, and only sail at night. She headed for Fremantle, Western Australia, where she arrived on 20 March 1942; Abraham Crijnssen was the last vessel to successfully escape Java, and the only ship of her class in the region to survive. 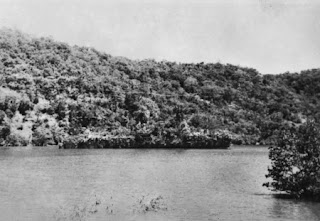 That's the Abraham Crijnssen above, disguised as an island.

Since the Netherlands had just been absorbed into Germany, the ship was re-commissioned in the Royal Australian Navy and served out the rest of the war.
Posted by John at 12:27 PM

I really do love me some good crypsis.