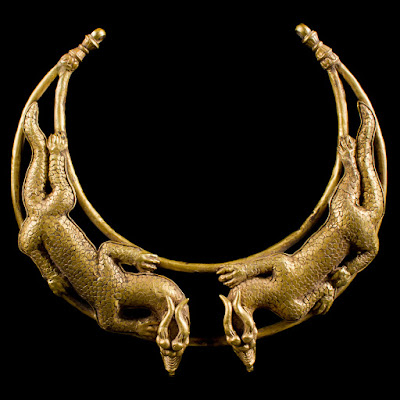 This item has been making the rounds on Tumblr, universally described as a Scythian gold torc of 200 to 0 BCE. I am dubious. It doesn't look Scythian to me at all. 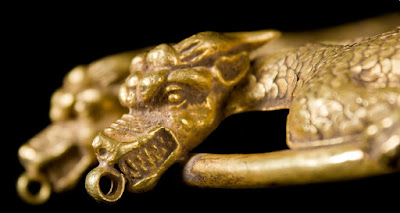 I tracked it back to this auction site, which says it has been chemically tested and dated. I'm not impressed by that, either; dating gold is extremely difficult, and any method would have a huge margin of error. By way of provenance they say only that it was purchased in Hong Kong in 1999.

If it does come from Central Asia as they claim, it comes from the eastern end; those are Chinese dragons. There were steppes societies under Chinese influence, and I have posted some of their Chinese-looking art here before. So this might come from a nomad tomb in Kazakhstan or Afghanistan. But it might come from a basement workshop in Hong Kong. Either way it looks pretty cool.
Posted by John at 9:39 PM

Now obviously I'm a layman with no real qualifications, but this looks decidedly modern to my eye.

The second picture in particular raises questions. What is that strange gray discoloration where the head meets the band, when as far as I know gold typically discolors to brown? What's with the joins between the head and band, and between the head and mouth loops? Why are there several scales that have gaps underneath them?

For whatever reason, this looks less like any number of the ancient gold pieces you've shown off on this blog previously, and more like a less-shoddy-than-usual imitation made out of some cheap metal, solder, resin, and gold paint, or similar.