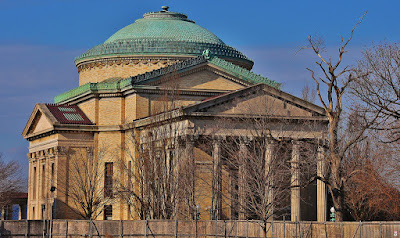 The Gould Memorial Library in the Bronx, one of Stamford White's most opulent creations, is in trouble. 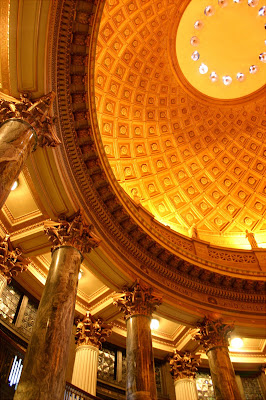 The library was built in 1897-1899 for the Bronx campus of New York University, a grand building for a gilded age. It was funded by the heirs of financier Jay Gould as his memorial. 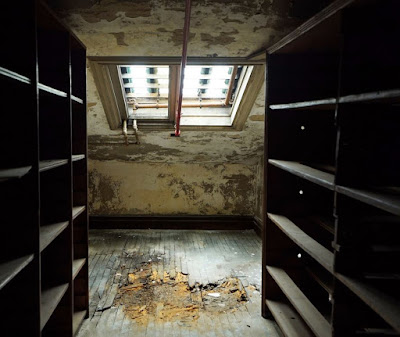 But as troubled times came to the Bronx, the campus suffered along with the city. The building was firebombed in 1969. In 1973 NYU, then on the verge of bankruptcy, abandoned its Bronx campus. The buildings were eventually sold to CUNY, which created Bronx Community College in the vacant space. The community college never had much use for the grand old library, and except for the rotunda, used for chamber music concerts and other small events, it has been vacant for years. 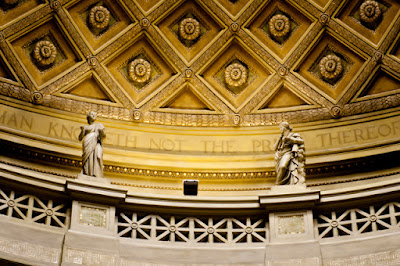 After contemplating a major renovation and expansion of the old building, and shrinking from the enormous cost, the community college built a new library, which opened in 2012. 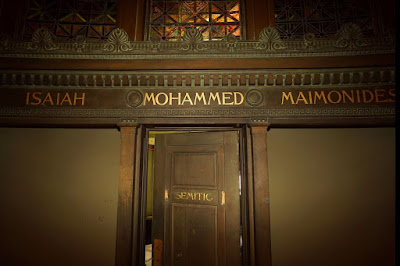 One of the doors off the rotunda:


Study rooms encircle the rotunda along a mezzanine balcony, many still bearing the names of their original scholarly purpose: “Semitic,” “Greek,” “Latin,” “German,” “English” and “Romance.” Every door is open to the empty room beyond, except “Romance,” which appears to be locked. 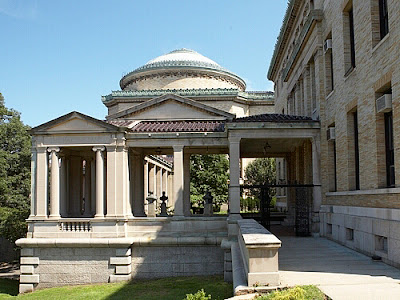 Now a private group, headed by Stamford White's grandson, is trying to save the building. This will mean finding a new use for it, and also raising as much as $50 million for renovations. I wish them luck, but it will not be easy. The Bronx is not the awful place many outsiders imagine, but it is far from the fashionable parts of New York, and not really in need of a new museum. Gould himself is a vilified figure these days, often considered the most unscrupulous of the old robber barons. So far Save the Gould Library doesn't even seem to have a web page, so I can't tell you how they're doing. We'll have to wait and see what happens.
Posted by John at 7:35 AM

What a magnificent building-- clearly quoting the Parthenon.

I grew up in suburban Philadelphia, in a housing development built just after the end of WWII on the grounds of what had been the Edward Stotesbury estate, Whitemarsh Hall. (The development was called "Whitemarsh Village."

The mansion (designed by Horace Trumbauer) was a glorious structure, visible from everywhere in the area as it sat atop a rise. By the '50's, it belonged to PennSalt Company, though the Met Museum either stored or had plans to store much of its finest work in its basements in WWII.

Growing up in the '50's, I spent many a long afternoon wandering the grounds of the mansion, admiring the fountains and the statuary, wishing I could get inside. Apparently in the late '60's and '70's kids growing up there did get inside and wandered around happily.

When PennSalt abandoned it, the building was allowed to sink into ruin, with vandals trashing its statuary and thieves making off with the sheets of the copper roof. (Rumor has it that the thieves were abetted by the local cops, btw.) It was finally demolished in 1980, with a few items left as set-pieces for new housing units for the uppermiddleclass moving to the suburbs.

Here's a great arial view of the mansion in its prime:

I do hope this foundation is able to save the Gould building; I would contribute if there were only some way to do so. I still feel an ache when I think of the fact that I can never see the "Mansion" again.