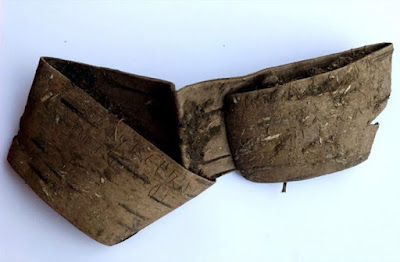 Archaeologists working in Moscow have unearthed a letter written on birch bark identical to the ones that are so well known from Novgorod. Dating to the 14th century, it is addressed to "Sir" and describes the woes of a man journeying on Sir's behalf. The writer was headed to Kostroma, a town about 200 miles northeast of Moscow. Along the way he was arrested by some local official and had to pay a lot of money to get out of jail -- he doesn't say whether this was a fine or a bribe, and really in the medieval world there wasn't much difference.

This was a common problem in medieval and early modern Europe, familiar to anyone who has spent much time reading royal court rolls. In fact it endured into modern times; in Dickens' Pickwick Papers Mr. Pickwick and his companions were arrested in just this way and spent the night in an animal pound. Medieval officials were always on the lookout for suspicious strangers, so any traveler ran the risk of being arrested by an overzealous bailiff and then having to somehow prove that he was on legitimate business. If he had no friends in the immediate vicinity who could vouch for him this might be difficult. Some of these victims were so aggrieved that they later tried to sue their persecutors, but in England at least officials were always able to cite various royal proclamations urging them to keep watch for criminals, so convictions for false arrest were very rare.
Posted by John at 8:34 AM