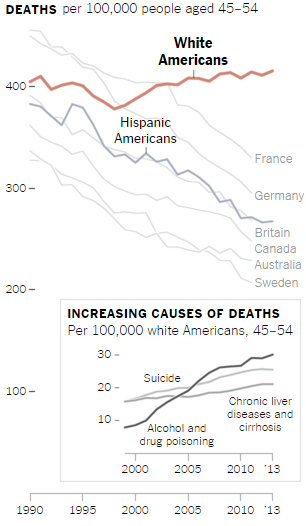 That finding was reported Monday by two Princeton economists, Angus Deaton, who last month won the 2015 Nobel Memorial Prize in for Economic Science, and Anne Case. Analyzing health and mortality data from the Centers for Disease Control and Prevention and from other sources, they concluded that rising annual death rates among this group are being driven not by the big killers like heart disease and diabetes but by an epidemic of suicides and afflictions stemming from substance abuse: alcoholic liver disease and overdoses of heroin and prescription opioids.

It is important to note that this is true only for middle aged people with no more than a high school education; but things are so bad for that group that they are dragging down life expectancy for all white Americans.

What could the cause of this possibly be, if it is not that things are increasingly hard for this group of people?

In a libertarian world, the sort of world we have been moving into since 1981, the sort of world advocated by all the major Republican candidates, there are winners and losers, and it sucks to be a loser. Here you have the effects of such a world laid out in the starkest possible terms.
Posted by John at 7:52 PM