Strange Days at the University of Missouri 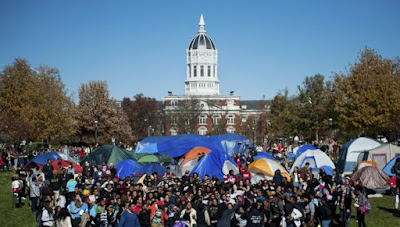 Timothy Wolfe, the President of the University of Missouri, has resigned after a bizarre and even baffling series of events. The immediate crisis started with racist incidents and Wolfe's failure to respond to them, which led a few hundred demonstrators to camp in the middle of campus. As anger spread through the student body, especially but not only among black students, more and more people demanded that Wolfe resign. Eventually the football team threatened not to play, and their coach supported them, and after that of course the President had to go. I mean, he doesn't think he is more important than football, does he? No.

What happened? Racial tensions are a fact of life at big American universities, in fact in American life as a whole. One of the best statements I have heard about these events came from Janet Napolitano, President of the University of California, who said that “universities have historically been places where social issues in the United States are raised and where many voices are heard. That’s just part of a university.” Exactly. So I have trouble believing that mishandling a racist incident alone could have led to Wolfe's departure. The more I read and think about this, the more I believe that Wolfe found himself at the confluence of several different strands of anger coursing through the country, and that his removal has to be seen in a bigger context.

Wolfe was a business executive who spent a lot of time at IBM and was hired by the Board of Curators in 2012 specifically to cut costs. That, I think, was his first and perhaps foremost problem. Wolfe's first conflict was actually with graduate students, after he tried to stop paying for the health insurance of graduate teaching assistants. This led the graduate students to protest, supported by most of the faculty, and eventually Wolfe backed down. But he had earned the enduring hatred of the graduate students and the more left-wing faculty, while at the same time failing to do the job the Board of Curators had hired him to do. Many American universities are being roiled by these basic conflicts about who actually runs the university, and in whose interests; the firing and then return of the president at the University of Virginia highlighted the same tensions.

When they were protesting against the administration's plan to cut their health insurance, the graduate students joined forces with another group that had been protesting around campus for months: black students upset about what they saw as persistent racism on campus. The leaders of this group had been involved in the protests in Ferguson, where they learned how to organize using Twitter, how to get media attention, and so on, and also imbibed what I am tempted to call the contemporary culture of protest. What I have in mind is the way the protesters proceeded to set up a tent camp, where they proposed to stay until something was done about their demands. While there they refined their rhetoric about all the ways students are oppressed by racism, sexism, and so on, and issued statements full of the same demands for sensitivity we have seen on so many other campuses. They proclaimed their camp to be a "safe space," and among other things tried to keep reporters from talking to students in the camp or taking pictures of it, proclaiming their right to be left alone.

Of course the Ferguson protests were a highly divisive issue on campus as elsewhere, and some local racists took to social media to voice their opinions:


University of Missouri students spotted an anonymous threat on the social media app Yik Yak in December, after riots in Ferguson: “Let’s burn down the black culture center and give them a taste of their own medicine.” Hundreds rallied on campus to protest the message.

All of this escalated in September:


The protests at the university began early in the fall semester after Missouri’s student government president, who is black, said he was called a racial slur by the occupant of a passing pickup truck while walking on campus. Members of the Legion of Black Collegians, the leading voice for African Americans on campus, said racial slurs were directed at them by an unidentified person walking by. And a swastika drawn in feces was found recently in a dormitory bathroom.

President Wolfe was clearly at sea. He had no idea how to respond to any of this and generally acted as an out-of-touch elitist technocrat; for example, during Homecoming on October 10 a bunch of students blocked his car, but he refused to speak to them, staying inside until police arrived to clear away the protesters.

As I see it, Wolfe simply found himself in the middle of too many social conflicts, with too many enemies. His mission to cut costs and narrow the university's mission put him at odds with the faculty and especially the more radical and activist professors. Ferguson and the Black Lives Matter movement aroused many U of M students against racism, and Wolfe perfectly played the part of the clueless old white guy who doesn't get it. The various forces that gave us Occupy Wall Street all came into play, especially resentment of the 1 percent and a sense among many young people that the world is organized against them in a way that goes deeper than politics or economics. The weird phenomenon of protesters who chase away reporters -- haven't any of them read Alinsky's Rules for Radicals? And if they wanted to be left alone,  why were they in the middle of campus? -- sums up for me the psychic conflicts involved here. These conflicting desires to take angry action and be left alone in a perfectly safe place can't be reconciled in any way whatsoever, certainly not by a promoted-over-his-head middle manager like Timothy Wolfe.

I find my thoughts about these events oscillating from one second to the next. One part of me sees a deep, deep disquiet with our whole system that may somehow erupt in unexpected and dramatic ways; the other part sees protests so incoherent that they will never change anything, a product more of emotional confusion than radical politics. I do have hopes that Black Lives Matter and even more the spread of smart phones will lead to real improvements in police behavior, and so far as I can tell racism continues its long, slow decline. But I think universities will lumber from crisis to crisis because we fundamentally don't agree on what education means, what it should entail, or who should pay for it. Creating a just world is probably beyond us, and every measures I think would go some distance in that direction is loudly opposed by half the country.

Timothy Wolfe was the wrong man for the job, and his departure has in itself no significance. As to whether anything of significance is happening here, I do not know.
Posted by John at 9:17 AM