The Baths of Caracalla 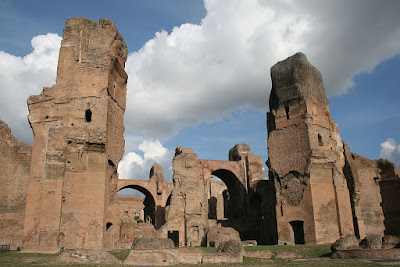 One knows, in a general way, that Renaissance Italians excavated numerous ancient statues from ruins in and around Rome, and that these discoveries had a big impact on Renaissance sculpture. But it was only today that I learned how many famous works came from a single site, the Baths of Caracalla, excavated in a brief period around 1545-46. The Pope at the time was Paul III, and his chief sculptor was Michelangelo, so it was the great master of Renaissance sculpture who supervised the excavation and restoration of these finds. 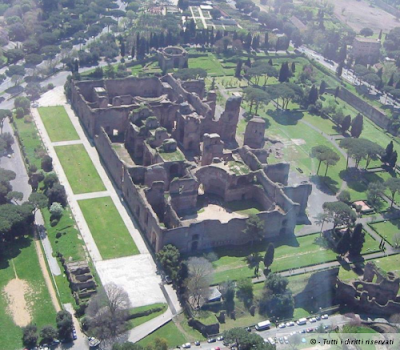 The baths were built by the Severan emperors in the early 200s CE. Traditionally, they were begun by Septimus Severus and completed by his son Caracalla, although some historians think they weren't actually completed until decades later. Even in their ruined state they are immense and impressive, towering 125 feet above the ground. 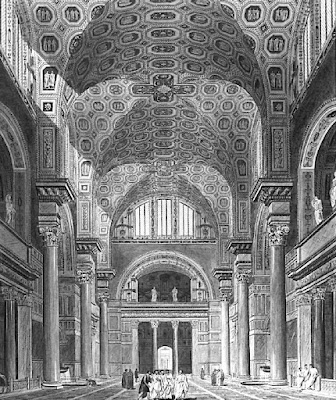 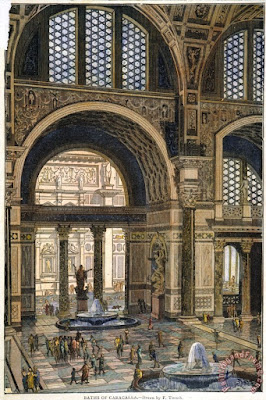 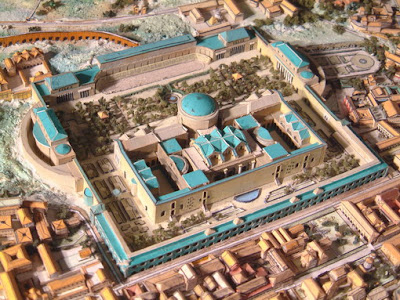 When they were intact, they must have been a marvel; it is said that they could accommodate 1,600 people at once. 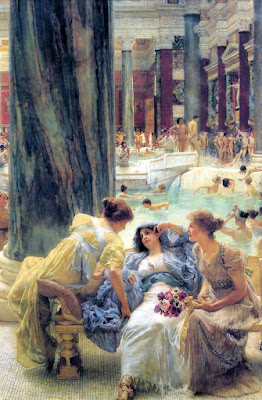 Alma-Tadema painted them, of course. 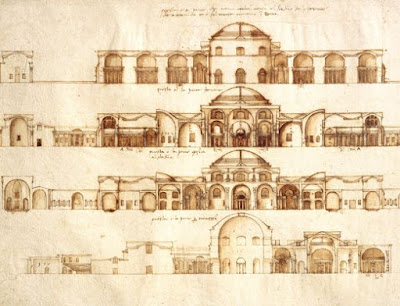 Besides Michelangelo, another Renaissance luminary involved in the excavations was architect Andea Palladio; these are his sketches showing how the baths might be reconstructed. 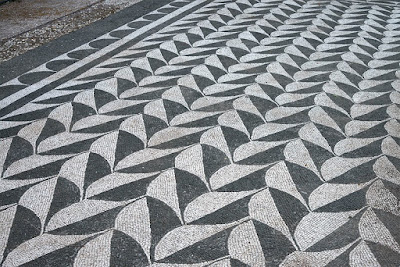 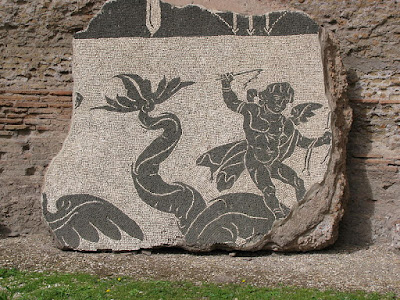 The baths were originally full of mosaics, of which many bits survive. 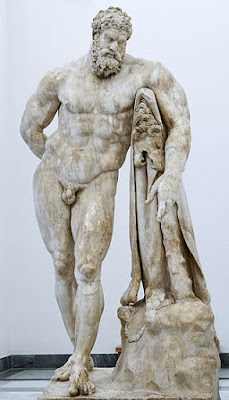 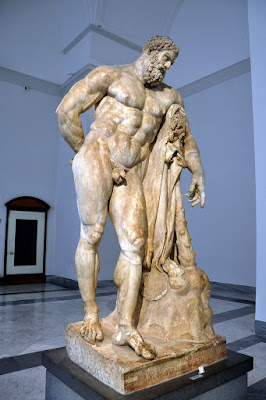 Fragments of dozens of sculptures have been found in the ruins of the baths. The most famous is the Farnese Hercules, executed by the sculptor Glykon for the baths, on the pattern of an original "Weary Hercules" by Lysippos in the 4th century BCE. 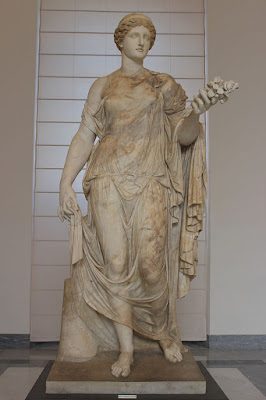 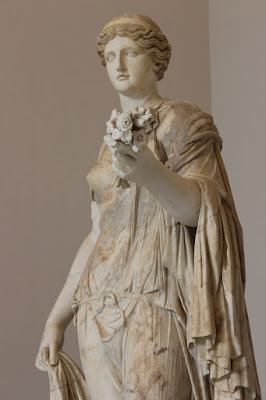 Another notable find is the Farnese Flora, although she emerged headless and has a Renaissance head. Some of the sources I have found say she can't have come from the baths because she is attested by 1536, but the most authoritative pages I have seen stick to the traditional story. 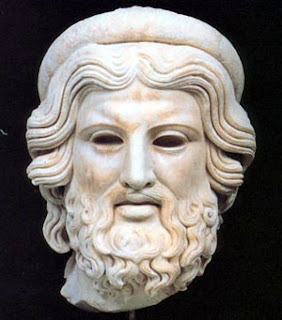 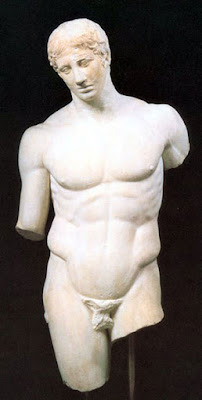 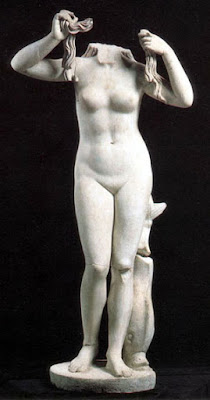 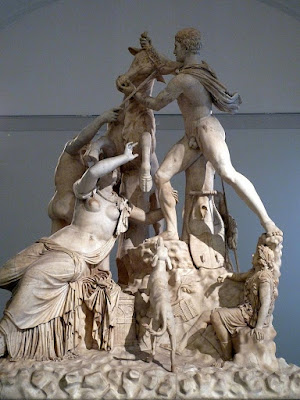 Perhaps the most astonishing find is the sculpture known as the Farnese Bull, more properly the Punishment of Dirce. This is the largest single sculpture ever recovered from the ancient world. It depicts the myth of Dirce, first wife of Lykos, King of Thebes. Zeus had taken as his lover a Theban woman named Antiope, and she bore twin sons, Amphion and Zethus. An oracle predicted that they would become kings of Thebes. Dirce wanted her own son to assume that title, so she exposed the two infant boys in the woods and enslaved Antiope. But the boys (of course) were found by a shepherd and raised to manhood. It came to pass that Antiope eventually escaped from her harsh bondage and fled to the woods, where she ended up in the hut where her sons were being raised. The story came out, the relatives recognized each other, and the enraged sons vowed revenge on Dirce. They tied her to a bull, which was driven through the streets until she was dead. King Lycos, not at all put out by this, married Antiope and adopted her sons, who did indeed become kings. 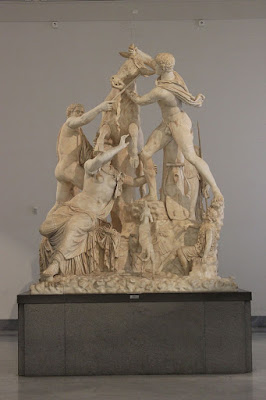 Opinions differ as to when the Farnese sculpture was made. Pliny the Elder described the sculpture, which he said was carved by the Rhodian artists Apollonius of Tralles and his brother Tauriscus at the end of the 2nd century BCE. It was imported from Rhodes by one of Rome's great collectors/looters of Greek Art, Asinius Pollio. 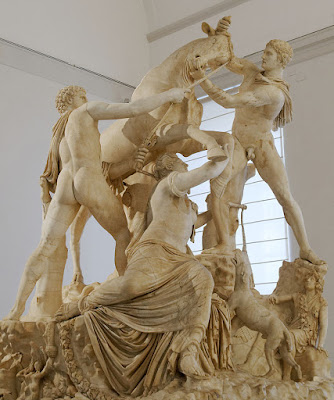 But is this the same sculpture Pollio acquired, or is it a copy made for the baths, as the Hercules was made? Sorry, opinions vary, with various art historians taking equally certain stands on either side. 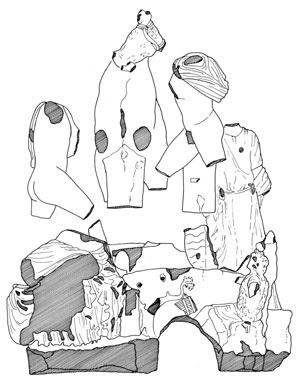 One thing we do know is that the sculpture came out of the ground in 200 fragments and was put back together by Michelangelo; the above is based on sixteenth-century drawings of the fragments. When you read that Renaissance sculptors were influenced by classical work, you have to remember that they didn't just see it, but worked with the fragments, puzzling them back together and carving replacements for missing heads and arms. 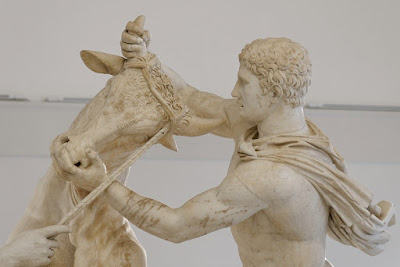 Truly a remarkable work; and what an excavation that must have been.
Posted by John at 7:20 AM