The Ring Lady of Herculaneum 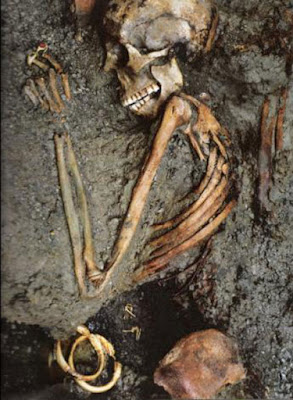 When I was first reading about Pompeii and Herculaneum, it was said that almost everyone had fled to safety before the towns were consumed by Vesuvius. Herculaneum, in particular, was thought to be empty of bodies. But beginning in 1981 archaeologists began exploring the waterfront, and on the beach and in boat sheds they have found more than 300 victims. Most likely they were trying to flee from the town by boat when they were overtaken by the pyroclastic flow -- a wall of hot air and ash that can travel at up to 450 miles per hour (700 kph). Boiled alive by temperatures of around 500 C, they died very quickly. 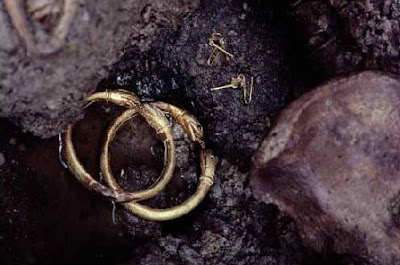 The most famous of these skeletons is the Ring Lady. She was tall, about 45, in good health. She was trying to take with her a fortune in jewelry, in particular two gold bracelets and two gold rings with gems. 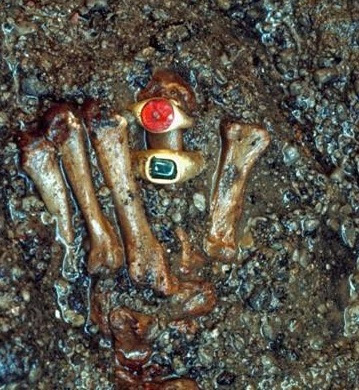 The rings from which she takes her name. 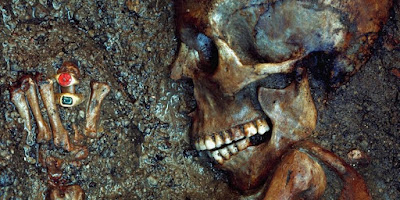 Because of her height and good health, it is generally assumed that she was a wealthy woman and the gold was hers; but in that case, why hadn't she escaped earlier with all the other rich folks? So maybe she was servant after all who came back to rob her mistress; perhaps she was tall and healthy because she grew up free but was then enslaved in some forgotten war, and nursed for decades her desire to recover her lost status
Posted by John at 7:39 AM

"Because of her height and good health, it is generally assumed that she was a wealthy woman and the gold was hers; but in that case, why hadn't she escaped earlier with all the other rich folks?"

Any number of reasons. Overestimating how much time was available and thinking there was enough to gather her wealth before leaving. Underestimating the extent of the disaster entirely until it was too late. Underestimating the difficulty of finding a boat willing or able to take her to safety. A missing child / family member / beloved servant that she refused to leave until they were found. Who knows?

I think it's highly flawed reasoning to assume that everyone who was wealthy would automatically have succeeded in fleeing, and that anyone who didn't must have actually been a poor looter. It also doesn't make much sense to me for someone hurriedly looting treasure in the approach of a disaster to take the time to put on multiple rings, although as I point out above, human judgement isn't always the soundest.