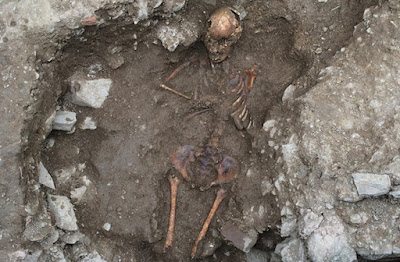 In northern Italy, archaeologists working in a medieval cemetery have uncovered the skeleton of a 15-17 year old girl whose body was burned and then buried in an irregular pit; the pit was then covered with heavy stone slabs. She stood about 4' 9" tall. The grave has not yet been radiocarbon dated, and the excavators can only say that it dates to between the 9th and 14th centuries.

This is a perfect example of what archaeologists call a "deviant" burial, one that was made contrary to the stated rules of its society. Burning corpses was a taboo act in Christian Europe, punishable in some areas by death. But it was used for people who had offended so badly against the society that they had to be completely cast out: heretics, witches, women who murdered their husbands or children. Our historical accounts generally say that such people were burned alive, but I am not familiar with any burials of such victims; the ones that have been uncovered by archaeologists were dead before they went in the fire. There are enough of these to make me suspect that execution followed by the burning of the body may have been a common alternative to the legally-mandated death by fire.

I find these anomalous burials interesting in a broader sense as well. In traditional societies all over the world, informants tell anthropologists "we bury our dead like X." This is true, for example, of American Indians in the early historic period. But when archaeologists excavate cemeteries they often find several different burial methods. One graveyard of the late prehistoric culture in Ohio, the probable ancestors of the historic Shawnee and Miami, produced burials that had been cremated at another site and then moved to the grave, burials that had been cremated in the grave, unburned burials lying on their backs, and unburned burials curled on their sides. I have always wondered what led the the differences, but nobody has been able to figure it out.
Posted by John at 11:56 AM