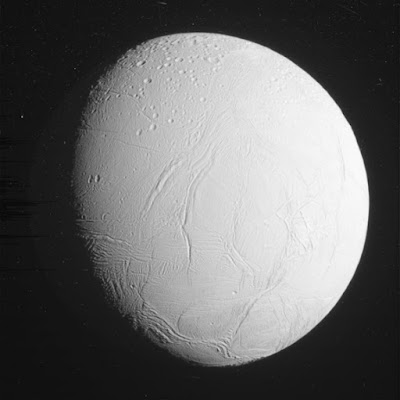 Since there isn't any life on Mars, exobiologists have shifted their interest farther out  in the solar system. Specifically they are interested in the subsurface oceans that have been detected on Europa, a moon of Jupiter, and Saturn's moons Titan and Enceladus (above). NASA is already working hard to send a probe to Europa in a decade or so. Rather than drilling through the crust to reach the ocean, NASA plans to have the probe fly through the plumes of gas that regularly erupt from the moon's surface, sampling the gas for organic molecules and other signs of life. 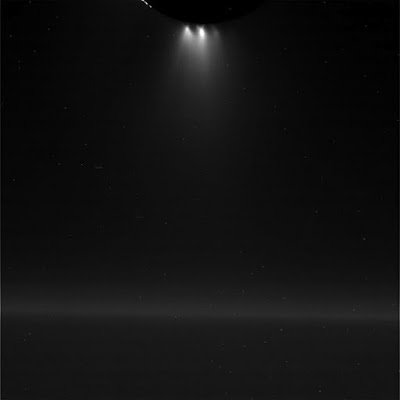 But NASA already has a highly capable spacecraft orbiting Saturn, the amazing Cassini. Cassini was not designed to search for life in plumes of gas, but it does have a dust analyzer called the CDA that can do some basic chemistry. (Details here). Cassini was supposed to have run out of fuel years ago, but its mission controllers have gotten so good at maneuvering the probe around Saturn's system of moons using gravitational tugs from various objects that they can send it almost anywhere in the system using just puffs of gas. So NASA decided to send Cassini on a deep dive to Enceladus, passing within 30 miles (49 km) of the surface at the south pole where jets of gas most regularly erupt. Flyby was October 28, and NASA is starting to post processed images from the encounter. That's the south polar plumes above, photographed during this approach. 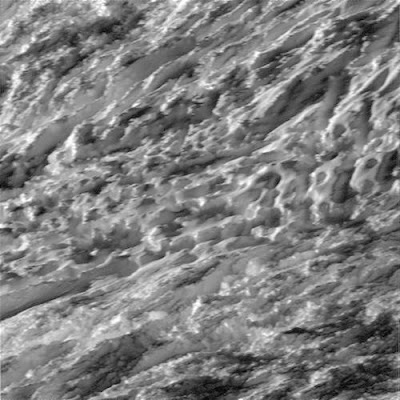 A close-up view of the moon's surface.

Apparently it will take a few weeks for the data to be analyzed, and Cassini's web page warns everyone not to expect too much from a machine designed to do other things. But it's good to know that we don't have to wait a decade for our first readings on the chemistry of these hidden oceans.
Posted by John at 10:57 AM