Getting to Space is Still Expensive 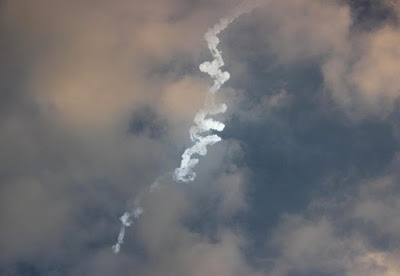 Ever since we succeeded in getting into space, at vast expense, engineers have been struggling to make it cheaper. The Space Shuttle was supposed to be so reliable and reusable that it would be cheaper than conventional rockets, ha ha. Now we have attempts by private companies to make space cheaper by doing away with government overhead, so far without much success. The Air Force's latest experiment in launching small satellites cheaply, the rail-launched Super Strypi rocket, blew up yesterday over Hawaii.

Face it, folks, riding a bomb into orbit is difficult and risky and will be for a long time to come.
Posted by John at 1:10 PM

Physics is the enemy here, and our biggest problem is that we seem to be focusing solely on the notion of rapid ascent via explosive combustion instead of examining other, slower possibilities.

If we could get our vessels and payloads into the upper atmosphere, and then rocket from there, we'd take a huge chunk of rocket fuel out of the equation. But how to get high enough?

The classic "space elevator" idea sounds great, but is staggeringly implausible from an engineering standpoint.

Space-planes are one seemingly reasonable idea, employing vastly more efficient jet engine propulsion to slowly climb to the edge of the atmosphere and then switching to rocket boosters from there.

Another option might be lighter-than-air launches, using zeppelin-like vessels to float other vehicles to the edge of the atmosphere and deploy them from there. These craft would be massive but relatively simplistic, and could carry hundreds of tons of cargo which would be more than sufficient given the reduced weight costs of not having to carry all that rocket fuel.