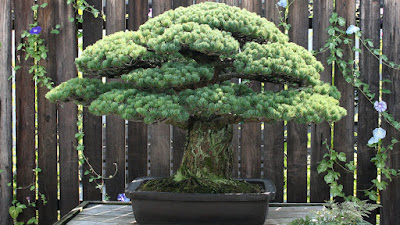 This is the Yamaki bonsai, a 390-year-old white pine now in the U.S. National Arboretum. It was part of a gift of bonsai given to the U.S. by Japan in 1976, for our bicentennial.

No one knew at the time that it was something of a barbed gift: the tree survived the Hiroshima bombing. Nobody in America knew this until the grandsons of the bonsai master Masaru Yamaki, who donated the trees, came to America in 2001. They revealed to the tree's American keepers that when the bomb went off the Yamaki family and their trees were in a house just two miles away; the tree survived unscathed because it was in a walled garden, against the wall closest to the blast.  Master Yamaki is dead, so nobody can ask him about his intentions in making the gift, but I think we can guess.
Posted by John at 7:50 AM

I'm not so sure we actually can guess - at least not without knowing more about the kind of person Masaru Yamaki was.

It all boils down to what Yamaki-sama believed in more strongly - hatred and conflict, or forgiveness and reconciliation? It might be there was a dark, hidden message in making a gift of the tree - or it might have just been purely good intentioned. There are people of all kinds, and for every person who would make the gesture out of bitterness and secret resentment, there's a person who would do it out of hope and nobility.

There's a saying I particularly like and which I find tends to be fairly accurate - "We suspect of others what we know of ourselves." I feel that whether one is inclined to view this gesture positively or negatively says something significant about the kind of person each of us is and how we think about the world.