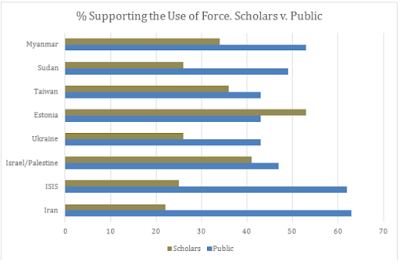 Fascinating little study comparing support for armed intervention among the public and among professors of international relations. The poll was based on scenarios explained in a single sentence, for example,


Would you support or oppose taking military action if Sudan continues to perpetrate human rights abuses within its borders?


Would you support or oppose taking military action to support the government of Estonia in the event that Russia intervenes militarily in support of ethnic Russians living in Estonia?

Except for the single case of Russian intervention in Estonia, the scholars were less supportive of war in every scenario. Presumably Estonia stands out because the scholars know that Estonia is part of NATO, and most of the public does not, which puts a rather different face on the problem.

The biggest differences turned up by the poll concern helping Iraq defend itself against the Islamic State, and attacking Iran if it is "very close" to a nuclear weapon. Even a majority of conservative scholars opposes both interventions. News coverage of recent events  in the Middle East seems to have the public spoiling for a fight. International relations professors must also have been thinking a lot about these two crises, but their response has largely been to doubt that force will do any good.

One interesting detail is that about 15% of the public supported armed intervention in every single case -- never met a war they didn't like, I guess -- but this was not true of a single professor.
Posted by John at 7:48 AM

I think the American public has an easy time advocating war because they have no clue what the consequences really are. They understand war in fairy tale terms, because they've forgotten what the reality of war is.

The last actual fighting on American soil was the barely known Aleutian Islands Campaign of World War II, which was more a wild goose chase than anything, most notably featuring a massive and stunningly bungled US sea landing that came far too late - the Japanese had already pulled out and abandoned Kiska Island.

The same war also saw a handful of minor attacks on American holdings, but they essentially amounted to a few handfuls of merchant and fishing vessels sunk and a small number of civilian casualties - more freak occurances than anything resembling true war.

Meanwhile, in Europe, the devastation was tremoundous and inescapable. Everyone loses loved ones in war, but the Europeans came to know some of the worst fighting in history in a very personal way. It's one thing to send soldiers overseas to fight and die, but it's another entirely to be invaded, seiged, defeated, occupied, bombed, counter-seiged, liberated, et cetera.

American soldiers may have experienced the realities of war firsthand in the European and Pacific theatres, but they ended the day triumphant, with minimal loses compared to their allies, and returned to homes that weren't bombed out husks which they would toil for years to rebuild. Americans - particularly those who never saw fighting - were able to return to "normalcy", to largely forget the war once it was over. Most Europeans were not so lucky.

I personally find that people who have either studied war or witnessed it firsthand tend to be the least eager to engage in it. It's easy to speak from ignorance, particularly about something that will never directly affect you. Just call for the government to send the troops overseas, wave some flags, pay some taxes, and never get your hands dirty. Let the Veteran Affairs office handle the human wreckage that gets brought back on a pittance of funding.

At least during Vietnam we televised our fighting - tried to send a message to the public about what their eagerness for conflict was actually doing to real people. Today we have better technology than ever to safely report on our wars as they unfold - so why don't we? Put simply, Americans don't want to know. They want to act belligerantly patriotic as a sort of social contest amongst themselves to see who is most "right thinking" and most "American" in their values - keeping up with the Joneses, so to speak. Everything that happens beyond that they couldn't care less about.

The last time non-veteran Americans truly knew warfare was during the American Civil War. It has been a century and a half since we've been intimately acquainted with the destruction and the horrors of it all. We no longer have a living memory of war to guide us against engaging in it. Our veterans don't speak out, either unable to because of crippling untreated traumas, or unwilling to because of our overwhelming culture of Jingoism where seriously criticizing our ever growing succession of foriegn wars is practically tantamount to sedition or treason.

I fear the only way American will once again learn to revile warfare will be for it to break out in full in the American heartland - for people to have to once again live it themselves, unable to put it in the back of their minds and conveniently ignore the unpleasant truths of it.