Halfhead, Rousby, and the Gentle Life of Colonial Maryland 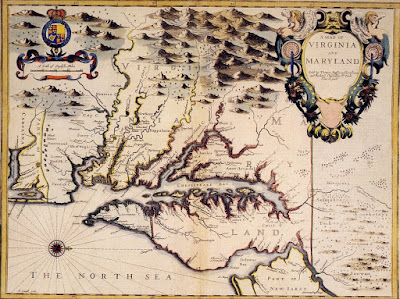 I had a lot of fun this week researching the history of a property on the Patuxent River in Maryland that now belongs to the Navy. Part of it was patented in 1649 by an "illiterate bricklayer" named John Halfhead. Halfhead had a bunch of properties, all named after himself: Halfhead Hollow, Halfhead's Folly, and my favorite, Halfhead on the Hill.

Can the name "Halfhead" mean anything other than idiot?

One of Halfhead's neighbors was Joseph Edloe, who called his property Susquehanna Point. Edloe and Halfhead did not get along. At one point Edloe sued Halfhead for debt and trespass, whereupon Halfhead sued Edloe for assault; Edloe v. Halfhead and Halfhead v. Edloe tracked each other through the court of Chancery for the next couple of years, neither suit ever coming to trial. After Edloe died, around 1660, his heirs made the mistake of leasing 100 acres of Susquehanna Point to Halfhead, which led to another lawsuit that was not settled until 1675. Halfhead died around 1680, crushed by a falling tree at the age of 70.

In 1684 Susquehanna Point was sold to another great character, Christopher Rousby. Rousby was born into a family of prosperous London merchants, but finding things in the Old World too dull for his taste, he immigrated to Maryland in 1668. He quickly made friends with the Calverts (the Lords Baltimore, who were also the Proprietors of Maryland) and their lackeys, and they arranged for him to become the king's Collector of Customs for the Patuxent and the sheriff of Calvert County. You can judge how he carried out his duties from his land purchases, which came to nearly 3,000 acres during the five years he served as customs collector. In 1681 he fell out with the new Lord Baltimore; according to one witness, Rousby called Baltimore


a Traytor to his face, and his Lordshipp Offering to speake again Mr. Rousby told him he had best hold his tongue and say no more.

Under normal circumstances gentlemen did not call Peers of the Realm traitors to their faces, or tell them to hold their tongues, so this requires a bit of explanation. The underlying issue was Protestant-Catholic tensions, which were on the verge of boiling over in England as Charles II sickened and his Catholic brother James looked to inherit the throne. Since the Calverts were Catholic and had founded Maryland partly to serve as a Catholic refuge, any religious strife in Britain always caused storms on the Chesapeake.

Lord Baltimore, back in England, accused Rousby of illegally collecting fees from merchant ships, besides being an all-around bastard. Baltimore complained to the Earl of Anglesey that Rousby was "the most lewd, debaucht, swearing and prophane Fellow in the whole Government and indeed not fit to be admitted into Civill Society." (If you know anything about the government of colonial Maryland, you will recognize that to be considered its most profane member was quite an accomplishment.) One of Baltimore's friends, a certain Vincent Lowe, testified that he heard Rousby call the King's men "greate knaves and turne coates who had begun to piss backwards," which was somehow a slur, Lowe thought, on the king's refusal to disinherit his Catholic brother.

Rousby, as we have seen, was not easily intimidated. He fired back at Baltimore that he was only acting on the King's orders, and that he was more popular in Maryland than Baltimore was. (Which was probably true, since by then Maryland had a large Protestant majority.) As for Lowe's testimony, Rousby said that "he must have been drunk, as was nothing unusual with him." In the end the Board of Trade found for Rousby and ordered Baltimore to pay him a huge fine of 2,500 pounds.

But Baltimore was a great man, and even when he was walking on eggshells over the religious question he was not to be trifled with. In October, 1684, a heavily armed British warship called the Quaker was cruising in the Chesapeake under the command of a belligerent Protestant named Captain Thomas Allen. Rousby was on board, and according to witnesses the two of them were sailing around casting slurs on the royal government, calling Marylanders "fooles and knaves" for paying dues to the Calverts. At 5:00 PM on October 31, Colonel George Talbot of the Maryland militia, an old Calvert friend, approached the Quaker on a sloop with five men. Our most dispassionate account of the events that followed says,


the said Talbot came on board and after some words had passed between Captain Allen the Commander and the said Talbot chiefly concerning your Majesty's Right of Jurisdiction in those Parts, the said Talbot without any just Provocation embracing the said Rousby, stabbed him with a dagger newly prepared and sharpened, evidently for some ill purpose, whereof he immediately dyed.

But I prefer Captain Allen's more detailed version, which says that after Talbot came on board he kept trying to kiss Rousby and Allen: "I told him to stop, for I was no woman, and then he hit me a blow on the head." Talbot said that they could not be friends until they had had a good fight, on shore, to which Allen "heartily agreed." Talbot then asked Allen to drink to Lord Baltimore's health, which Allen refused to do. Rousby then returned from somewhere and said he wished to go ashore. Talbot said, "Rousby, you son of a whore, you dog, give me your hand -- don't you know I am your governor and can do you a kindness?" Rousby refused the proffered hand. Talbot then put his left hand on Rousby's right shoulder, muttered "Dear Rousby," drew the ill-purposed dagger and struck him in the right breast.

Captain Allen immediately put Talbot in irons, but mistrusting the Maryland authorities he delivered the prisoner to the government of Virginia instead. Lord Baltimore immediately demanded that Talbot be handed over for trial in Maryland, but the king, not trusting any of these colonial characters, ordered that he be brought to England. Before that order had arrived in Virginia Talbot had already escaped, rescued from his prison by a bizarre crew described as


a shallop having on board Madam Talbott, Philip Murry and another Irish man red haired, and two new hands Irish, together with a Servant wench and a Child.

This unlikely band of heroes got the guards drunk and whisked Talbot away, keeping him in hiding until he was pardoned by the new Catholic king.

Some other time I'll write about the sinister and pointedly unnamed husband of a certain Mary Thomson, whose father-in-law put elaborate clauses in his will to prevent the husband's "having any manner or use of the estate or intermeddling therewith."
Posted by John at 7:10 AM

"Can the name "Halfhead" mean anything other than idiot?"

While I'm cheerfully certain you ask in jest, one of my favorite little hobbies is studying etymology, and I happen to have an actual answer for you, so hey!

Halfhead is a corruption of the Old English "healf" + "hid", quite literally meaning "half hide". Well what might that refer to, then? Someone with a strange skin defect? Or perhaps a particularly lousy fur trapper?

Like so many other surnames, this one is based on a placename, and once you know that fact you can piece it together with a related bit of information. A "hide" of land was the amount that could be plowed by a single plow and a team of eight oxen - roughly one hundred acres. So if someone owned a tract of 50 acres, it might conceivable end up named "Halfhide". And we do know it happened elsewhere before - theres a "Halfhides" in Essex, for example.

There are a number of records of various people with this surname, with variations like "Halfhyde" and "Halvehid", the latter of which is the earliest example of the name, attested from 1212.

As for the whole Rousby affair, this is why I love history - the most absurd and fantastical events are to be found in the past, and are far more interesting for their reality than any fantasy could be.