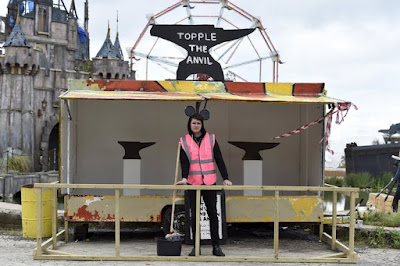 In the English un-paradise of Weston-super-Mare, graffitist Banksy and a bunch of other artistes have erected a sort of faux theme park they call Dismaland. You go there, get roughly frisked by rude guards at the gate, and then wander around being insulted by performers in various booths and admiring grim scenes, which I guess is supposed to show your superiority to the people who go to Disneyland. Mostly I don't really care what Banksy, Damien Hurst, and their ilk are up to, but this installation, or artscape, or whatever it is, is calculated to irritate me and all of my tribe. It inspires people to say things like:


Naomi Woodspring, 66, an academic visiting from nearby Bristol, where she lives, contrasted Banksy’s show with an installation based on Thomas More’s Utopia that she recently attended in London, saying that she saw in Banksy’s exhibition “a visioning of real change.” She added, “It pushes us to envision a whole other way of being, and to begin to live that way of being.”

I don't understand how anybody can look at this and be inspired to anything. What change? What way of being? Isn't there enough rudeness in the modern world without adding to it in the name of art? Most days I just think, you have your thing, I have mine. But sometimes they get to me. They get to me because I think there is something inherently defeatist about the whole culture of artistic negativism. Artists have been skewering the bourgeoisie for so long that there is no longer any target left to aim at, just a pile of dirty straw and a few shreds of red and yellow cloth. Saul Bellow wrote an essay about these people back in 1965 to which I have little to add:


The fact that there are so many weak, poor and boring stories and novels written and published in America has been ascribed by our rebels to the horrible squareness of our institutions, the idiocy of power, the debasement of sexual instincts and the failure of writers to be alienated enough. The poems and novels of these same rebellious spirits, and their theoretical statements, are grimy and gritty and very boring too, besides being nonsensical, and it is evident now that polymorphous sexuality and vehement declarations of alienation are not going to produce great works of art. . . .

The separatism of writers is accompanied by the more or less conscious acceptance of a theory of modern civilization. This theory says in effect that modern mass society is frightful, brutal, hostile to whatever is pure in the human spirit, a Waste Land and a horror. To its ugliness, its bureaucratic regiments, its thefts, its lies, its wars and its cruelties, the artist can never be reconciled. This is one of the traditions on which literature has lived uncritically. But it is the task of artists and critics in every generation to look with their own eyes. Perhaps they will see even worse evils, but they will at least be seeing for themselves. They will not, they cannot permit themselves, generation after generation, to hold views they have not examined for themselves. By such willful blindness we lose the right to call ourselves artists; we have accepted what we ourselves condemn -- narrow specialization, professionalism, snobbery and the formation of a caste.

Unfortunately the postures of this caste, postures of liberation and independence and creativity, are attractive to poor souls dreaming everywhere of a fuller, freer life.  The writer is admired, the writer is envied. But what has he to say for himself? Why, he says, just as writers have said for more than a century, that he is cut off from the life of his own society, despised by its overlords who are cynical and have nothing but contempt for the artist, without a true public, estranged. He dreams of ages when the poet or the painter expressed a perfect unity of time and place, had a real acceptance and enjoyed a vital harmony with his surroundings -- he dreams of a Golden Age. In fact, without the Golden Age there is no Waste Land.

Well, this is no age of gold. It is only what it is. Can we do no more than complain about it? We writers have better choices. We can either shut up because the times are too bad or continue because we have an instinct to make books, a talent to enjoy, which even these disfigured times cannot obliterate. 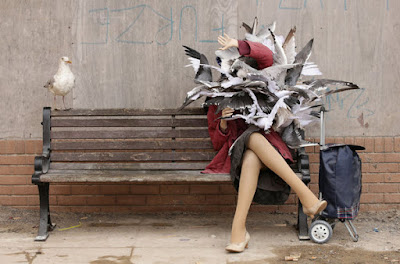 From what I have seen, there are actually a few flashes of wit in Dismaland, including the statue above. I like what this guy says:


Trey Cruz, 40, who lives in Seattle and works in software development, had a more laid-back take on the exhibition. Mr. Cruz took himself on a monthlong tour of Europe to celebrate his birthday this month. He canceled his flight home when he heard about Banksy’s show; checked into a hotel on Saturday; and visited the show Saturday and Sunday. “I just like that I’ve met a ton of people,” he said. “Just kind of randomly ended up, like, walking around with some people for a little while, then went and met other people.”

That is the only way I can stand preachy modernism; as a conversation starter. Sometimes it is fun to look at this sort of stuff with your friends and mock it or enjoy it as the spirit moves you. But meaning? Change? New ways of being? Please.

Whining is what toddlers do. Artists should have something more to offer.
Posted by John at 7:50 PM