Carbon Dioxide and the End of the Last Ice Age

At the end of the last Ice Age, the level of Carbon Dioxide in the atmosphere soared. As the CO2 level rose, so did the temperature. Behold how closely the two lines track each other in the graph above. 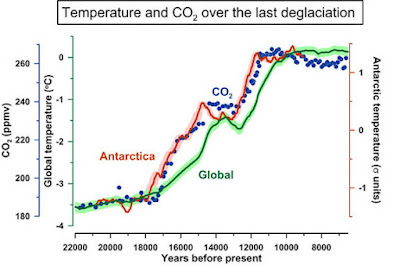 Or in this one.

So you might say that the rising level of CO2 obviously caused the rising temperature, the retreat of the glaciers, and the origins of the modern climate. That's what this new study concludes, after making the most detailed comparison yet between temperature and CO2 levels:


A team of scientists led by Jeremy Shakun of Boston College re-examined the ages of more than 1,100 previously studied glacial boulders by measuring a particular isotope -- Beryllium-10 -- produced by exposure to cosmic rays.

They compared their findings, the most accurate so far, to the timing of the rise of carbon dioxide in the atmosphere, data gleaned from ice bubbles trapped in ice cores.

The results were unequivocal.

"The only factor that explains glaciers melting all around the world in unison during the end of the Ice Age is the rise in greenhouse gases," said Shakun.

Well, maybe. But what caused the rise in the carbon dioxide level? Where did all that carbon come from?


Scientists are still not sure what triggered the gradual release of CO2 into the atmosphere starting 19,000 years ago, or exactly where it came from.

"It's fair to say that the reason CO2 went up and down over the Ice Ages is one of the biggest palaeoclimate mysteries out there," Shakun said by email.

The most likely scenario, according to co-author Peter Clark of Oregon State University is that huge quantities of carbon bubbled up from the sea. "The carbon was likely released because of changes in the ocean and its circulation that were triggered by changes in the Earth's orbit around the Sun," he wrote in an email exchange.

So does that mean the real cause of the rise in temperature was  "changes in the Earth's orbit around the Sun"?

Climate scientists spout a lot of nonsense these days, but the reason they spout nonsense is that they are really freaked out by the red spike at the far right of that top graph. Until 1940 or so, temperature and CO2 tracked each other pretty closely. Since then, the CO2 concentration has soared, and temperature has not. When scientists try to model the climate, their equations keep telling them that those two curves must eventually come back into sync. That is, sooner or later the temperature must rise to match the rising level of CO2, because the two curves have always been so closely aligned in the past.

If you are a skeptic, you might say that we know no such thing. We only know that whatever global processed drove climate change in the past worked that way. Burning coal is something new in history, so maybe it will work out in a completely different way. And it might. But that seems to me like a risky bet that we would be fools to take.
Posted by John at 7:34 AM