Paternalism vs. Free Speech at the FDA 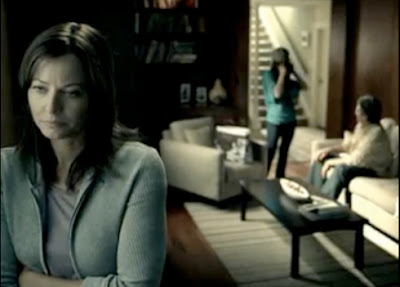 Back in the ancient, long-ago days of yore (when I was in high school) the Food and Drug Administration put very stringent limits on what the manufacturers of prescription drugs could say about them. To begin with, no advertising to the public, and strict rules about what pharmaceutical companies could say to doctors.

Over time, that paternalistic control of information has crumbled away. Prescription drug makers have become some of the biggest advertisers on television and the internet, creating a large job market for actors who know how to look miserable but hopeful. Limits on what the companies say are also eroding. Just last week another federal court struck down another FDA limit, this one a rule saying that companies could not reveal the result of drug trials to doctors until they have been evaluated by the FDA. The court ruled that as long as it is being truthful, a drug manufacturer can reveal preliminary studies about so-called "off label" uses of prescription drugs. 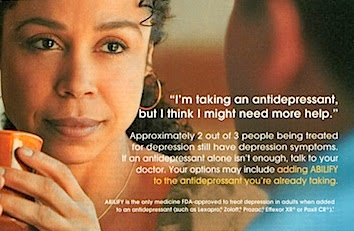 Is America a better or worse place because of all those ads for antidepressants?

How you answer depends, I think, mainly on how you feel about advertising in general. One strain of American populism has always hated ads, sure that they are all lies and just make people want things they don't need. Many of these people subscribe to Consumer Reports, which especially delights in revealing which high-end products are actually worse than the cheap versions. If you follow this school, you probably think that ads for drugs just spread dependence on drugs and enrich the owners and executives of drug companies, at no benefit and possibly great harm to the rest of us.

But it is also possible to see drug ads as getting a lot of useful information out to the public, and perhaps inducing people who could really use medical help to seek it. Maybe it is a good thing for depressed people to be reminded that there are now a lot of different drugs they can try, one of which may help them.

Maybe I'm not taking all those ads full of suffering people seriously enough, but I honestly don't see any great harm.
Posted by John at 8:06 PM

But absolutely none of that is true.

The pharmaceutical companies are some of the biggest, most profitable corporate presences in the country and the world. They're also some of the biggest sources of political lobbying, buying votes and favors left and right, and manipulating legislature to promote their own ends on a massive scale. They hold incredible amounts of sway over the medical profession, and their corporate ethos places far more importance on improving sales than on promoting health. I don't know about you, but that scares me.

Advertising is a predatory business, with ads purposefully designed to exploit human failings in judgement. It's not out to educate or to inform for the benefits of the general population, it's out to influence and manipulate in the pursuit of profit by any means available.

It's a business that comes as close to lying as possible at every turn, and which is perfectly willing to knowingly distort the truth and misrepresent reality in destructive ways so long as there's money in it. The epitome of the entire industry is political attack ads - they'll say anything they can get away with, spew as much vitriol and spawn as much hate and animosity as they can, so long as someone writes them a big enough cheque.

Of course, there's always the argument that people just shouldn't let ads sway their thinking. But humans are far from rational creatures, particular those who are poor and miserable. Even the well educated, financially secure, and emotionally well adjusted among us tend to underestimate the effects that the mass media have on us and our thinking.

The best proof of all this is the adveritising industry itself. They actively study the human psyche to find new ways to manipulate people. The industry's entire philosophy is based on getting people to think and feel in ways the advertisers want them to, ideally without having them realize they're being manipulated.

They're experts at deception and duplicity; at telling white lies and half truths; at being intentionally disingenuous whenever there's a scrap of profit to be earned in doing so. Our entire economy and culture rewards them for behaving in as untrustworthy a manner as possible, and we make them special considerations to allow them to act that way.

I'd very much like to live to see the day when advetising ceases to exist in a physical form, being reserved for augmented reality or something like that.

I desperately want the chance to opt out of the constant barrage of deceitful trickery which has been custom engineered to exploit my psychological blindspots and failings; to find respite from the constant attempts of others to actively manipulate me in the name of naked greed; to be able to enjoy the world around me without having the equivalent of a gaggle of stalkers and beggars continuously hounding me, pestering me, doing anything they can to steal my attention away from where I choose to direct it in the hopes of getting something of value out of me.

But even putting my personal feelings aside, can you honestly say we have any logical reason NOT to distrust the pharmaceutical companies and the adverisers to do everything in their power to make money at absolutely any cost, so long as it isn't to them? Do you really think that any good they might end up doing is anything other than coincidental to their efforts to wring monetary value out of everything they can get their hands on?