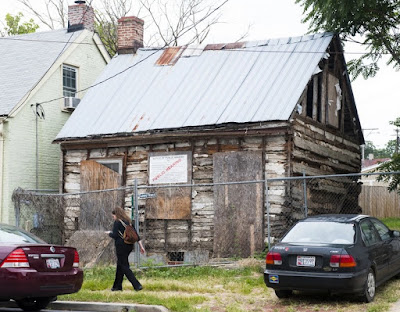 In Frederick, Maryland, the charming little historic town where I sometimes teach, there is a crumbling log house. The neighbors want it gone, and Habitat for Humanity, which bought the lot in 2005, wants to tear it down and build a home for some lucky poor person. But many preservationists want it to stay.


The origins of the cabin are somewhat murky, but property records from the application for demolition show that a woman named Mary Rose bought it at auction from the Frederick sheriff in 1827 after the previous owner, Peggy Rose, had caused a “breach of the peace.”

Mary Rose passed down the property to her granddaughter, and it changed hands many times.

The notion that it is an old slave quarter is not supported by any record I know of and seems dubious, since the cabin was obviously built to front on a town street. (Unless it was moved to its current site, but there isn't any evidence of that.) 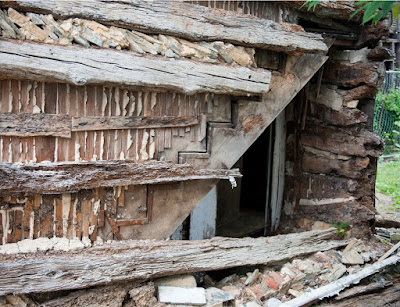 I work in preservation because I like old things, including old log cabins. But this house is past saving and the city needs to let it go. The logs are so rotted that the structure could not be made sound without replacing many of them, and once you dismantle a log house and replace half the logs, what is authentic about it? You might as well just build a new one. Plus, restoration would cost $100,000, and nobody is offering to put up the money. The existing structure is highly unsafe and could easily collapse on some intrepid trespasser; no sensible property manager would allow it to remain as what the law calls an "attractive nuisance." I have to say that I agree with a neighbor interviewed by the Post, who  said,


Historic people really get out of hand sometimes.

When buildings are not cared for, they fall apart and are lost. To have any impact, historic preservation efforts have to begin long before that happens. Out in the woods you can get away with ignoring old ruins so they will linger on as background scenery, but in the middle of a populated neighborhood that is not really an option.
Posted by John at 7:28 AM

Some things are worth preserving, while others simply aren't. But while that in itself is an interesting discussion to have, it's ultimately a moot point when preservation itself is fundamentally impossible.

Add to that the moral imperative to house homeless people on the site, and the only sensible way to handle the case seems pretty clear.

A more worthwhile object of preservation that actually could be preserved would complicate matters. (I'd personally want Habitat To Humanity to simply build elsewhere in that case, but for them to also be compensated adequately for doing so.) But with a site that neither is of any real significance, nor that can be properly preserved anyway, this is reduced to a total non-issue in my mind.