Today's Place to Daydream about: Siena 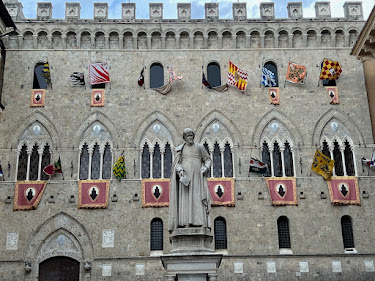 Siena is the second city of Tuscany, a status that led to a centuries-long struggle to maintain their independence against Florence. The Sienese imagine themselves in much the way Florentines do, as lovers of art and beauty lifted above cruder people by their refined sense of style. 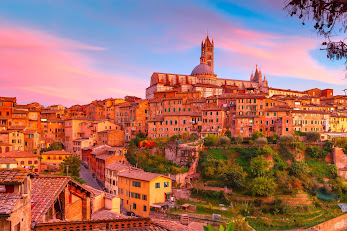 In fact this preoccupation was written into the city's constitution of 1309:

Whoever rules the city must have the beauty of the city as his foremost preoccupation, and in fact our city must be honorably decorated and its buildings carefully preserved and improved, because it must provide pride, honor, wealth, and growth to the Sienese citizens, as well as pleasure and happiness to visitors from abroad.

The city is an ancient place, dating at least to Etruscan times. Later on they said it was founded by Senius, son of Remus, one of the two legendary founders of Rome, and they made the she-wolf who suckled the founding twins one of their emblems. 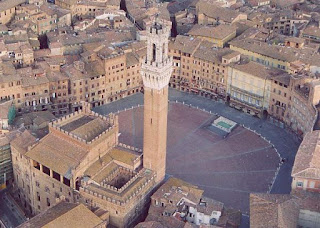 The central plaza still overlies the Roman forum. Siena was not a great place under the Romans, since it was somewhat isolated in a group of rocky hills. But that location proved a boon during the violent centuries that followed the empire's collapse. Records of the place become common after the Frankish conquest of 774, when a count and other Frankish nobles set up residence there. 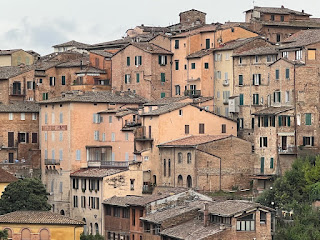 Siena became an independent Republic in the twelfth century and mostly kept that status down to 1555, when it was defeated by the Spanish and Florentines and incorporated into the Grand Duchy of Tuscany. 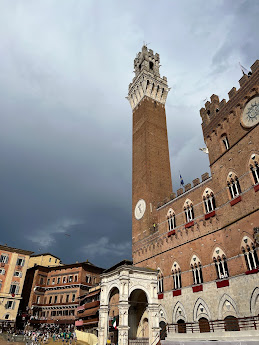 The city reached its peak of political power during the rule of the Council of Nine, between 1287 and 1355. This was a complicated arrangement in which power was shared among the leading families and the main craft guilds. The Nine built the Palazzo Pubblico with its famous tower, which still houses the municipal administration. 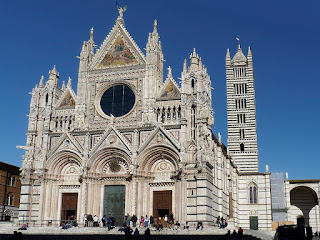 They also built the great cathedral; I have a whole post on it here if you want to see more of it. Now that I understand better the demographic arc of European histoy, this makes sense. Europe reached an economic and demographic nadir in the 900s, before embarking on centuries of growth that reached a peak in 1275 to 1348 (depending on the region). In the north, growth was ended by the onset of the Little Ice Age in the late 1200s, but in the Mediterranean growth may have contined into the 1300s before the Black Death brought everything crashing down. Siena reach a peak of population around 1310, at 50,000, that it would not reach again until the 1700s. So if you ever wondered why Europe has so many cathedrals built between 1200 and 1348, there is your answer: that's when they had the money and people to do it. 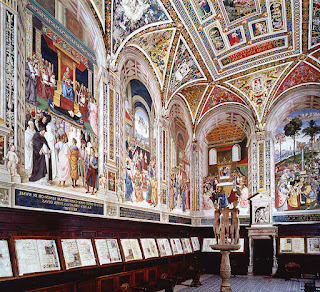 Siena is of course full of art; this is the bishop's library, attached to the cathedral. Among the painters who worked on this was the young Raphael. 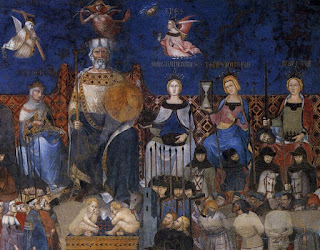 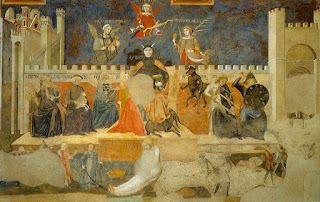 One of the most famous works in this city is Ambrogio Lorenzetti's Allegories of Good and Bad Government, painted in 1338-1339. This ancient view of government still has power in our own time, a deep belief that when the rulers are good, things will be good in the land. 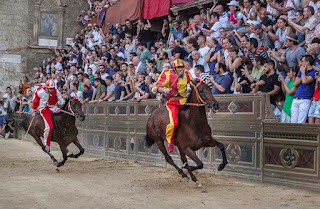 The big annual event in Siena, their equivalent of Carnival in Venice, is the Palio, a horse race in which the competitors are sponsored by old neighborhood associations. It is held in the center of town, in the main plaza. 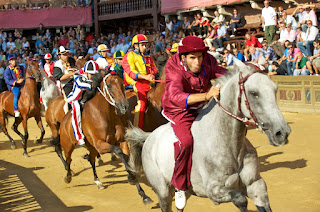 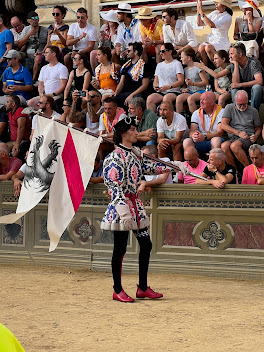 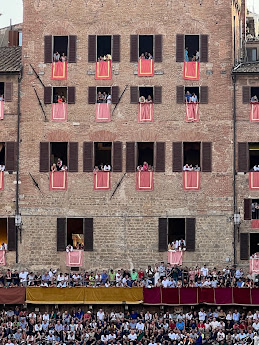 It's cold in Catonsville, and winter dark is already falling. So let me cast my mind to Italy, to Siena, to imagine the crowd, the sun, the horses, the brilliant banners, the delight that something so old and simple still brings pleasure to thousands, in a city where beauty is an obsession. 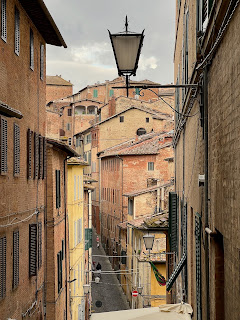 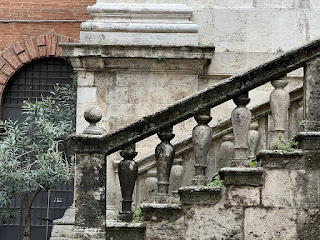 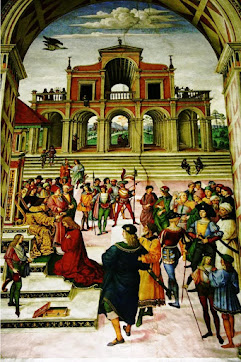