"Ancient Apocalypse" and the Question of Truth 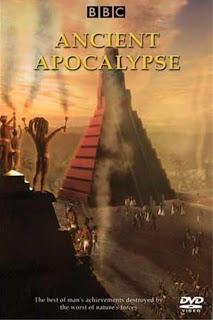 Why do we care about the truth?

But what about our knowledge of the past? Why do we care what really happened? Would it perhaps be better if we just believed about the past whatever makes us happy in the present, or makes our politics go more smoothly?

Netflix is running a series now called "Ancient Apocalypse" focusing on the work of Graham Hancock. Hancock has been a thorn in the side of academic archaeology for 30 years, writing book after book in which he attacks "mainstream" science for ignorning evidence it does not like and lying to people about the past for nefarious reasons. (Brief discussion of Hancock's work here.)

Hancock thinks there was a great human civilization in the Ice Age. Sometimes he says it was on Atlantis, while at other times he has been cagey about where it might have been. These people were spiritually more advanced than we are, and lived all the time, or whenever they wanted to, in a state of bliss. They were destroyed by some cataclysm – lately he has been focused on the comet impact that some scientists think caused the Younger Dryas cold snap 12,900 years ago. But before they disappeared our wise ancestors sent agents across the world who passed their wisdom to many peoples, and we can relearn that wisdom by studying ancient myths from around the world.

The evidence for any of this is, let us say, thin.

But Hancock doesn't believe it because of scientific or linguistic evidence. He believes it for spiritual reasons, as an act of faith. Hancock has admitted that he spends most of his time stoned, and this explains much of his writing style. His approach to evidence is, well, drug-addled. But he doesn't really care about evidence. All he cares about in the whole universe is his faith that humans once had Enlightenment, lost it, and can recover it if we try hard enough.

To me the weirdest part of Hancock's schtick is his attitude toward archaeologists. If we are hiding evidence of a great and spiritually advanced civilization, why are we doing that? To the extent that he ever gives an answer, it's the old Gnostic dualism. Archaeologists are working for the evil demiurge – the System, the Corporation, the Government, the Illuminati – that is determined to keep humanity as miserable slaves.

If I could persuade Graham Hancock that this is all nonsense, should I? What if that would strip his life of all meaning and make him miserable?

A Zen Buddhist would say, absolutely, Enlightenment can only come from ruthlessly confronting the Truth. A devout Christian or Muslim would agree would agree for different reasons. So, I suppose, would a Dawkins-style New Atheist.

But what is a highly uncertain deistic agnostic supposed to think?

What if there were some lie we could spread that would make the world better without damaging our scientific progress or justifying authoritarian governments. Like, say, that racism is a Satanic plot spread by the Illuminati to divide humanity and help them rule it, dreamed up at a sinister conclave held in 1357 at a now-destroyed Bavarian castle at which Satan personally presided. You can still see his footprint in the rubble.

Ok, it probably wouldn't work; but what if it did?

Serious people used to justify the way we taught American history to elementary school students by saying that, sure, George Washington never cut down a cherry tree or threw a silver dollar across the Potomac, but if believing such things shapes young minds toward patriotism, then it is worth it. We need them to love their country, because otherwise we can't have democracy or win wars. And some serious people now say that the collapse of naive patriotism in the 1960s greatly weakened the US military in Vietnam.

Don't focus on those specific cases, they are just examples of a huge class of claims about patriotism you see all over the world. How about we consider the opposite, a lie that we would probably agree is dangerous. For example, that the whole African continent was illiterate until European colonialism. Or in the opposite direction, that slave owners were cannibals who raised slaves for human meat. Don't laugh, this is believed by thousands of people, maybe hundreds of thousands, and regularly makes the rounds on Twitter and TikTok. I think myths like these have a bad impact by further deepening racial mistrust. I think that debunking such myths serves a political purpose.

So could there maybe be lies that, if believed, would do the opposite? You can say, you can't do that, you can't just make up a lie and get people to believe it, the truth will out; but I think history proves you wrong.

I used to be a fanatic for the truth. In science, and in personal life, I believed that an honest commitment to truth-telling was the root of everything good. I am now convinced that in personal life, shading the truth is sometimes the only humane thing to do. What about in history?

For me this just doesn't come up, because my thrill is in learning about the past, in trying to figure out what it was really like. I try to be ruthless in my pursuit of the truth, at least in history, because that is what I like doing. The past is cooler and weirder than I could ever imagine, anyway. Once I would have said with certainly that my way is better than Graham Thomas', but now I have lost that certainty, and wonder.

I can think of several things to say. One is, I think the world would be a poorer and less interesting place without people like Hancock in it. Of course, I'm seeing him as at best a charming, harmless eccentric with ideas that are fun for me because they remind me of Burroughs, Lovecraft, and suchlike, which I admit is pretty condescending and probably doesn't meet the categorical imperative, or something like that. I admit that, at bottom, I really don't feel too bad about that, but I suppose I could defend myself saying I think there are worse things than condescension--like if we subjected such people or anyone else to reeducation camps and struggle sessions.

Another is that I think some lies can be absolutely useful and beneficial. I've heard these called "life lies." Recently someone posted here complaining about the nonsensicality of the US insisting it believes in one China, while also promising to defend Taiwan and maintaining full relations with mainland China, etc., etc. I actually think our nonsensical stance is the perfect one for the situation. It allows us to sort of warn the mainland Chinese while not insulting them (and avoiding insulting someone is, I would say, practically THE MOST IMPORTANT THING in diplomacy--MUCH, MUCH more important than consistency) and also allowing us to actually deal with the most important foreign country in the world. I would say the same about our policy toward North Korea: saying it is absolutely unacceptable for them to have nuclear weapons, while in practice doing nothing to stop them. I'm quite satisfied with this policy.

Probably the most famous historical "life lie" was the lie that Augustus was not the sole, essentially dictatorial ruler of Rome--that he was merely "the first man" and a modest guy who spent his days quietly devoted to all the good old ways. A splendid solution to a century of murderous civil war, imo.

Of course, other lies, like the Dolchstoss, have had terrible consequences and need to be fought as hard as possible. I might say the same about "stop the steal"--but we may, very luckily, be seeing tiny hints of the waning of that particular blight on our national life.

We are social creatures, we are emotional creatures, and we live in an astoundingly complex world that frequently hurts us - sometimes the least bad option is to not be 100% forthright with all the facts, or to couch the facts, or even to outright lie.

But lies are never good - they are just sometimes a necessary evil. Like all necessary evils, we should fight back against becoming comfortable employing them, lest we become complacent, corrupted, et cetera - "necessary" is subjective, and we ought always hesitate to be the ones to judge what is "necessary" when it involves other people, and particularly when it involves things like deception.

And that's purely on the scale of individual deceptions - whereas, you ask about the (admittedly far fetched) notion of spreading "beneficial" mass deception like convincing people that racism is an Illuminati plot, etc. That's far more troubling, for reasons I would hope would be obvious.

Weaponizing lies weakens the power of telling the truth, no matter your justification. And it's impossible to lie well enough to fool everyone all the time - someone, somewhere, at some point will notice a stray thread in your story and pluck at it, and then the whole yarn begins to unravel.

Take the boy who cried wolf - assign him the most noble motivation you can imagine for lying about the wolf, and have the whole village who rallies to his side believe him utterly at first, and still, inevitably, someone will eventually stop and think something like "Hang on... instead of directly looking for this wolf we can never find, I should look for it's footprints!", and then they'll notice that there never ARE any footprints, and then the whole lie begins to fall apart, because people are always driven to search for the truth.

So in short order, the boy who cried wolf now becomes doubted, and the villagers stop rushing to "help" him when he calls, and lo and behold, for once he was telling the truth and gets eaten - and his noble cause for lying didn't change anything.

Truth must be upheld to as high a standard as we can accomplish, because the inevitable alternative is to live in a world where everyone pushes their own "alternative facts" and competes to "out-lie" their opponents in everything.