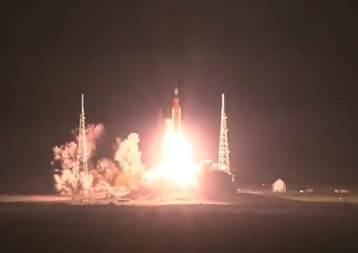 Launch of the Artemis I uncrewed Moon mission using the SLS Rocket, November 16, 2022

Denying the 2020 election results was not a very effective strategy in the 2022 election.

The alleged dungeon master shortage in the Dungeons & Dragons community. According to this, you can now charge for service as a DM. Maybe I should embark on a new career?

Evidence that our ancestors cooked fish 780,000 years ago; that would presumably be Homo erectus, although the excavators don't say. I caution that many claims for fire use by Homo erectus have been advanced over the years, but all have been questioned and none is universally accepted.

Ukraine's railroads as a microcosm of the nation in wartime: before February 24 the state-owned system was widely thought to be corrupt and was the subject of endless political debate over how it should be reformed; now railway workers are "iron heroes" and the international press runs story after story about how they have kept the trains running. (Long piece at the NY Times; thread by the head of the railways on his return to Kherson.)

Roman shipwreck found off the Croatian coast, text and video.

Congress is looking into banning TikTok, because it is a Chinese company that collects a ton of data on its users to which the Chinese government could have access.

It is entirely possible for economies to grow while carbon emissions fall. It is happening in most advanced economies.

Interesting review of a new translation of Ovid's Metamorphoses, with some thoughts on how we relate to ancient authors and how we are supposed to deal with all that rape. If you ask me the stories are full of rape because of the ancient sense that life is violent at its very root; that the verbs we need to describe life in its essence are kill, seize, take, possess, destroy; that creation and destruction are two faces of the same divinity. So the closer one gets to the origin of things, the more creation and destruction mingle, and the more it seems that the birth of new life must spring from the violence of rape.

An artifact recently discovered in Spain bears the oldest sample of written Basque, dating to the 1st century AD.

Article on narco-submarines from 2020, with a taxonomy of the craft; hundreds of these have been  built by now. And from the same source, a piece on Russia's beluga whale base.

Long, fascinating story about crime in the liberal bastion of Burlington, Vermont, where a rash of bike thefts spawned a (peaceful) vigilante group that recovers stolen bikes, and people worry that the spread of meth and a meth/fentanyl mix are leading to crises of mental health and violence. (NY Times)

Sam Bankman-Fried, CEO of the FTX crypto exchange that just failed spectacularly, seems to have been a regular user of stimulant drugs and related supplements. Scott Siskind delves into whether this was the root of his failure, with asides on stimulant use in the financial industry. His conclusion is that regular use of stimulants doesn't make most people compulsive gamblers, but stimulants at almost any level might increase your appetite for or tolerance of risk. Since Siskind thinks most traders are on stimulants, this might be important.

Vladimir Solovyov, the top analyst on Russian state television, mocks Trump's announcement that he is running for president again. "Really, what is this for?"

Thread on what the bankruptcy investigators found during their first few days of work at FTX. One detail: FTX did not have a list of all its bank accounts.

As one might expect, a lot of attention is being paid to the clothes of Italy's first female Prime Minister, Giorgia Meloni. During the campaign she wore a lot of bright pink, green, and yellow dresses – non-threatening and un-Fascist, I guess – but now she wears dark Armani suits for all important appearances. (NY Times) And so you don't think this is all sexism, the Times also ran a story about the news blowup that Emmanuel Macron caused by appearing in a turtleneck, apparently to signal his willingness to get tough and conserve energy during Europe's coming Russian winter.

My clothes signal only indifference to clothes.

With the Russian withdrawal from Kherson, Ukraine has regained more than half of the territory Russia had seized in mid March. The regained area totals 28,000 square miles, which is bigger than Denmark and nearly as large as Austria.

A Russian explains what lay behind the ill-fated assault of the 155th Marine Brigade at Pavlivka that led to the soldiers writing a letter of protest. The original idea was for a two-pronged assault, but when it was clear there were not enough men for two attacks, the generals cancelled one but ordered the other to go ahead, even though Ukraine would be able to concentrate all their resources against it.

Lessons from the war: "In the last two weeks, we have been convinced once again the wars of the future will be about maximum drones and minimal humans." Also high marks for a real-time mapping and operations package called Delta, which Ukraine used to track and interdict Russian logistics in Kherson. (NY Times)

The fall of Kherson leads to more angry recriminations on Russian television: "this clownery is indecent." And another talking head wants to know what the goals of the special operation really are, "for a change." These come from Francis Scarr of the BBC, a great source for what is appearing in all Russian media. Like the reports from Belgorod of Ukraine using pigeons to carry bioweapons.

Lots of chatter over whether Ukraine and Russia do "deals." For example, there are rumors that Ukraine and Russia did a deal over Kherson, that if Ukraine let the Russian army withdraw, they would leave Kherson intact. These rumors are passed on by people with contacts in the Ukrainian army; it seems to be Ukrainian soldiers who start them and pass them around. Interesting insight into how ordinary soldiers deal with the information vacuum they fight in.

"If you ask me the stories are full of rape because of the ancient sense that life is violent at its very root; that the verbs we need to describe life in its essence are kill, seize, take, possess, destroy; that creation and destruction are two faces of the same divinity."

I think this may be a good topic for further examination in light of the denial of "traditional culture, unified thought." It's clear the classical myths have a concept of creation and destruction as two faces of the same thing; but the obsessiveness with which they pursued the topic indicates to me that they weren't at peace with it. The Aztecs certainly had a similar idea, but their rituals indicate a deep preoccupation with staving off destruction. Destruction may be necessary for creation, but believing this didn't make being the destroyed thing any less dreadful for them. (As you put it earlier, change has victims; one may add, and the victims don't like it.)

One could say the same about moderns and religion. Our science is incredibly powerful, but it's given us a universe that to many seems devoid of meaning or comfort, and, whether one shares that feeling or not, I think one has to respect it (full disclosure: I share this sense; I'm an unbeliever who wishes I were wrong). So, much of our wider culture is also preoccupied with religion, other realities, and so on. These aren't just holdovers; they reflect a deep and culturally fruitful ambivalence, I think.

Oh, I agree; I think the reason the Greeks and Romans kept going back to those stories was because they never came to peace with them. Their world was violent, and sometimes they didn't like that or wished that at some level the universe might be different. The Hebrews had some similar issues with their oldest stories.

Personally I've never been able to wrap my head around sweetness and light, Jesus-loves-you religion; how can anyone look at the world and think God goes around setting things right all the time? And yet some people do believe it.

I was thinking, in line with the traditional culture/unified thought thread in the other post, about all those scenes in B movies, new age books, and so on, where someone says wisely, "The X people are not like us. They believe death is part of life, and one can't exist without the other," with the implication that all Xers are at peace with themselves, the universe, and their own deaths, and have no fears or neuroses, unlike messed-up westerners. That's the self-hatred side of western narcissism talking. It suddenly occurred to me you could make an argument that a lot of persons living in cultures that teach destruction is necessary for creation may have found their own culture's beliefs quite terrifying. The Aztecs certainly tried to make sure it was other people, not them, who got sacrificed to feed the sun.

Happy-clappy religion isn't much my taste either, but of course, for me, religion is largely a wistful intellectual or aesthetic object of study, and not real. For some true believers, maybe a friendly face in the cosmic gloom is very welcome.