A Powerful Salvo in the Fairy Circle Wars 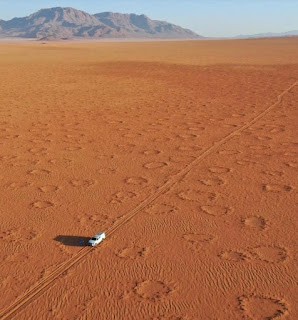 One of the bitterest debates in ecology is over the origin of the "fairy circles" in the Namib desert, roughly round patches of ground where no plants grow. Among the many theories that have been proposed, the two you hear most about have to do with water and termites. Now the water side have come out with an impressive study that gives them a substantial lead:

“Plants are forced to create these circles to redistribute water to maximize their chances of survival,” said Stephan Getzin, an ecologist at the University of Göttingen in Germany and an author of the study. “We call it ecosystem engineering.”

The Namib Desert is one of the driest places in the world, usually receiving only a few inches of rain each year. Researchers first proposed in 2004 that plants, in competition for water in this harsh ecosystem, may self-organize into fairy circles — an idea originally adapted from pattern-formation theory developed by the mathematician Alan Turing. . . . 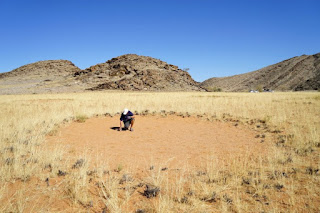 For their latest study, Dr. Getzin and his colleagues spent three years examining fairy circles at 10 study sites across 620 miles of desert. One of those years, 2020, was a drought, while 2021 and 2022 were exceptionally rainy — a lucky break that permitted the researchers to compare different conditions, Dr. Getzin said. . . .

After rain, the researchers found that grasses germinated both inside and outside fairy circles, but that within about 20 days virtually all of the young shoots inside a circle had died. They also found that the top eight inches of soil within fairy circles quickly dried out, something they hypothesize is caused when established plants surrounding fairy circles actively draw water toward them.

I find myself musing on why this obscure ecological debate gets covered in the NY Times, and why I also find it fascinating. I suppose this is science in a sort of raw form: here is a phenomenon that cries out for an explanation; what might that explanation be? I never tire of reading about that sort of scholarship.

I suppose this is science in a sort of raw form: here is a phenomenon that cries out for an explanation; what might that explanation be? I never tire of reading about that sort of scholarship.

I must absolutely recommend this Vox video, then, about the search to discover the nature of a series of mysterious circular formations in the Sahara desert. I keep rewatching it, despite knowing the answer to the mystery, because it's just such a well told story.