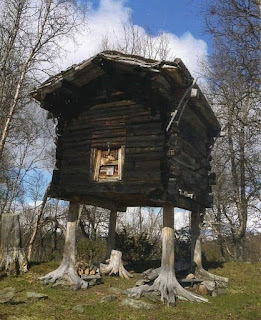 Historic building in Hattfjelldal municipality, Norland, Norway, said to date to the 1700s

Kaddish for a Jewish Thanksgiving, by an old family friend.

Is this a portrait of Shakespeare?

New book on the mitochondrial DNA lineages of Ashkenazic Jews finds that "both Israelites and converts to Judaism from a variety of gentile groups made lasting contributions to the Ashkenazic maternal gene pool." This agrees with another recent study that found the population most like Ashkenazic Jews is the Maltese, that is, a Syrian/Palestinian base overlaid with a little bit of everything else.

Ben Pentreath visits Italy to look at reclaimed building materials. So much wonderful old stone, tile, and more, plus great photographs of Turin.

The complexity of the domestic cat's migration into Europe. Domestic cats are not securely attested in Western Europe until the Roman period, but there are now signs of genes from Middle Eastern wildcats – the wild progenitors of all domestic cats – in the Neolithic and perhaps even earlier. Did semi-domesticated Middle Eastern cats spread on their own, trailing in the wake of grain-growing humans? Or were a few cats kept in Europe long before the first evidence of cat burials and the like?

Medieval bone flute found in England. Music is ancient: flutes go back at least 40,000 years, rhythm instruments just as far. Flutes could be made from bird bones or reeds by anyone with a good ear, so they were practically free and were very common across the world. Our amazing vocal apparatus probably evolved for speech, but maybe singing and whistling were also part of our earliest humanity.

Meat and the culture wars. Nebraska's new Republican governor promises a war against plant based products calling themselves "meat" or "milk", and that wonderful fountain of nonsense Marjorie Taylor Greene "once warned that the government was going to surveil and 'zap' people who eat cheeseburgers." The point I guess is that since most Americans eat meat, turning meat eating into a culture war topic would help Republicans.

Caroline Ellison, the CEO of Alamdea Research and the sometimes lover of FTX founder Sam Bankman-Fried, ran a Tumblr for years on which she extolled the virtues of polyamory in a mode she called "Chinese harem," with a strict hierarchy and the tops always getting their way. There is a rumor that the leadership of FTX all lived together as a polycule.

The NY Times is running yet another version of the massive teacher resignation story we've been reading since the beginning of the pandemic. As Kevin Drum points out, all of this is simply false. There has been no significant change in the number of teachers quitting. There may be some local teacher shortages, but that is perfectly normal; there are teacher shortages somewhere in America every year.

AI may be ready to take over comic book art.

Women now outnumber men at the New York Philharmonic. (NY Times) To me one of the clearest proofs of the psychological power of sexism was that switching to blind auditions greatly increased the number of women chosen to play in orchestras.

Irritating essay arguing that the main debate in America is not between right and left, but between people who think our main institutions are ok and "brokenists" who think they are ruined and need replacing. But, you know, replace them with what? If you really did tear stuff down, when it comes to rebuilding you would be right back to the same political divisions again, since the author says Elon Musk and Bernie Sanders are both "brokenists" and they are unlikely to agree on a new institutional framework. I suppose I am an anti-brokenist because I think you should never tear down an institution that is functioning even minimally until you have good reason to believe you have something better to replace it.

AI can now beat good human players at Diplomacy. They're learning to lie to us and manipulate us.

Tyler Cowen's list of the best nonfiction books of 2022.

Apropos of the FTX crash, Rebecca Jennings asks, "Why do we keep believing things that are too good to be true?" I ask, who is "we"?

Vox piece on Hakeem Jeffries, the likely next leader of House Democrats. Besides being black, his profile sound exactly like most other legislative leaders since legislatures were invented: a strong Democrat who supports the main Progressive things, maintaining credibility within his faction, but also a deal maker willing to reach across the aisle.

Short video showing the intensity of shelling in Bakhmut.

An optimist lays out his scenario for Ukrainian victory.

A Kazakh confectioner runs an ad  in which a Russian fleeing mobilization crosses the border and is greeted with one of their chocolate bars: "This is the taste of freedom."

Discussion in the Russian press about changing the name of Volgograd back to "Stalingrad." "When life is hard, you go back to where you are strong."

I'm not sure that twitter thread is a scenario for Ukrainian victory. It's a close analysis of the various sectors of the military front by which the author predicts continued Ukrainian military success. Then it ends with the sentence, "This unfolding military disaster for Russia will likely end with political consequences in Moscow." That's it. So it's a military analysis that ends with a big black box where the really important thing happens, and it offers no prediction or insight as to what that might be or how it might unfold.

What is needed is some real insight into what's going on and what might happen inside that Moscow black box (especially at the top, not hopeful quotes from Navalny or whatever). That's the heart of the matter.

a *kaddish* is is a generalized praising of the divinity, only said when there is a minyun: traditionally 10 adult male Jews; nowadays most branches of Judaism include adult females as well. ("Adult" means having been bar or bat mitzvahed.)

As the article you linked explains, "the special benediction that came before each festive meal, called a Kiddush, a sanctification of the day" -- what your friend wrote is a beautiful kiddish :)

Meat and the culture wars. Nebraska's new Republican governor promises a war against plant based products calling themselves "meat" or "milk", and that wonderful fountain of nonsense Marjorie Taylor Greene "once warned that the government was going to surveil and 'zap' people who eat cheeseburgers." The point I guess is that since most Americans eat meat, turning meat eating into a culture war topic would help Republicans.

That awkward moment when the Republicans unintentionally begin to sound like European Union bureaucrats putting legal restrictions on what can be called "champagne", etc, whom they decry as being "fussy" and "woke" for their insistence on accurate food labeling.

Careful, G, you're going to need Sarno's book on back pain if you stretch that far.

In what way is that a stretch? They're doing essentially the exact same thing, just for wildly different reasons.

"Woke" is in no conceivable way related to accurate food labeling, sorry.

Of course it isn't, but try telling the crazier Republicans that.

Now you're saying of course your comment doesn't make sense...? That was my point to begin with. It's ok, you tried, it didn't really pan out.