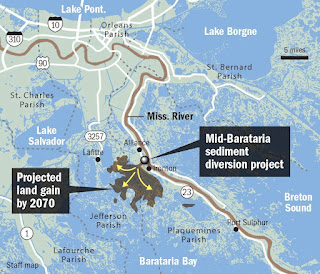 As Louisiana erodes into the sea at a rate of about an acre every two hours, people have been geting to work on how to save it. These efforts received a huge shot in the arm from the settlement of the BP oil spill, which cost the company $20 billion, much of which has been allocated for coastal restoration efforts of various kinds.

Everyone understands the root of the problem. Southern Louisiana was built by the Mississippi River, which used to flood across all these lands every year, dumping millions of tons of silt. But as the Mississippi was confined within levees and the flooding controlled, the silt stopped coming, and the sea began to take it all away. 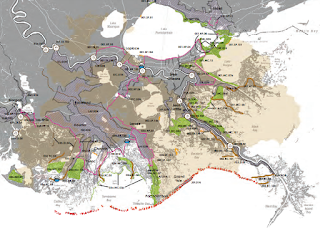 Map from Louisiana's Coastal Restoration Plan; the green areas places where new land is to be built

The solution is what are called "diversions." This means cutting channels through the levees and allowing the flooding river to flow back into the marshes. The first diversion was actually completed in 1991, and even though it was designed to lower the salinity of nearby marshes, rather than build land, it has in fact built new land. In a region where dozens of place names had to be removed from maps when they disappeared into the sea, the diversion is now building new places, including a channel dubbed Bayou Bonjour:

Bayou Bonjour debouched into a steaming marsh indistinguishable from thousands of others in southern Louisiana. Suspended in the shallow water were what botanists call S.A.V., or submerged aquatic vegetation, that took the form of green Mardi Gras wigs, tattered velvet, elephantine dill. The roots trap sediment like weirs. The mud clots until it surfaces as islets. The virgin land sprouts exclamatory tufts of giant cut-grass, named for its razor-edged leaves, which draw blood. Saplings colonize the accreting land, led by black willow, which shoot up 30 feet within a few years. “I don’t think anyone in their wildest dreams imagined that there’d be a forest here,” Lopez said. But a forest stood before him. It stood at the edge of the marsh, on land that 15 years ago was the open water of Big Mar pond. The Caernarvon diversion has created more than 800 solid acres in Big Mar alone. 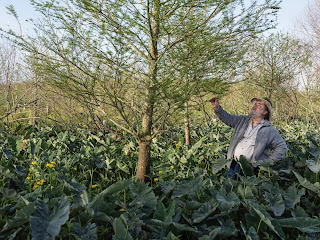 But that was just a sideshow compared to what is planned now. The first BP-funded mega-diversions are planned for Plaquemines Parish, south of New Orleans, one on each side of the river. The 5,000-page final environmental impact statement for the one on the west side, the Mid-Barataria Sediment Diversion, has just been published by the Corps of Engineers, which means that construction may go forward within a year or so.

These will be huge channels, capable of carrying more water than the Hudson River. As to what will happen when they are opened, nobody knows. But projections show first, an ecological castrophe as the plants and animals of the brackish marsh are drowned in fresh water and silt, and then land building in the bay with ecological recovery to the south, along the new boundary between land and sea.

They will probably help save Louisiana from washing away. But they are just a first step, and the steps looming in the future will be harder. These two diversions will exhaust Louisiana's share of the BP money, which means that future diversions will have to be paid for by taxpayers. Plus, these diversions are politically the least controversial, because they mostly avoid displacing people. Future diversions may wipe out whole neighborhoods.

But as I said when I wrote about this two years ago, we can either do things like this, or watch the whole Cajun country wash away.