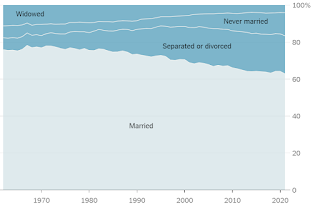 As the generations that married less and divorced more enter old age, many more Americans are growing old alone. In the NY Times, Dana Goldstein and Robert Gebeloff take a look at what this is going to mean:

In 1960, just 13 percent of American households had a single occupant. But that figure has risen steadily, and today it is approaching 30 percent. For households headed by someone 50 or older, that figure is 36 percent.

Nearly 26 million Americans 50 or older now live alone, up from 15 million in 2000. Older people have always been more likely than others to live by themselves, and now that age group — baby boomers and Gen Xers — makes up a bigger share of the population than at any time in the nation’s history.

This is of course mostly what people have chosen, and no doubt some people will do just fine. But there is a shipload of data showing that single people live significantly shorter lives than those with partners, and also that they are lonelier and less happy.

(I have noticed that the one demographic fact all of the men I used to play basketball with seemed to know was that single men live five fewer years than married men; I suspect some of them recite this to themselves when their wives are making them crazy.)

Compounding the challenge of living solo, a growing share of older adults — about 1 in 6 Americans 55 and older — do not have children, raising questions about how elder care will be managed in the coming decades.

Yeah, this is another major factor, especially in terms of loneliness. The Times cites a couple of childless people who reguarly run errands or do small repairs for their parents and wonder who will do the same for them.

There is also a weird real estate angle:

Living solo in homes with three or more bedrooms sounds like a luxury but, experts said, it is a trend driven less by personal choice than by the nation’s limited housing supply. Because of zoning and construction limitations in many cities and towns, there is a nationwide shortage of homes below 1,400 square feet, which has driven up the cost of the smaller units that do exist, according to research from Freddie Mac.

Forty years ago, units of less than 1,400 square feet made up about 40 percent of all new home construction; today, just 7 percent of new builds are smaller homes, despite the fact that the number of single-person households has surged.

As the article notes, one bedroom condos in many cities cost more than older 3-bedroom houses. This is something that really bothers me. Why, with household size falling rapidly, does the median home size keep rising? Some of it is zoning, which in turn is largely driven by the economics of funding local government with property taxes. Poor people living in apartments cost cities and counties more than they pay in taxes, so some jurisdictions have tried to zone them out. A few counties have even tried to ban townhouses. But some of it is our weird misunderstanding of what will make us happy, which drives some people to want bigger houses than they need. Big houses do not make people happy, but neighbors might help.

One thing completely missing from this article is retirement communities, either designated as such or just condominium buildings taken over by retirees. I think more people who can afford it should take this route; a friend of mine who used to work for a company that owned many such communities said she was always meeting people who said, "I wish we had moved in sooner! We hung onto our house as long as we could but we would have been happier here." Of course those are the extroverted people who want to talk to reps from the company that owns their development, but I think they speak for many. We cling to independence, but what we need is community.

I have a fantasy, which I never mentioned to anyone until I discovered that other people also have it. Having become magically wealthy, what I do is rent a Scottish or French castle for a whole year and invite all of my friends to visit for as long as they want. I have had this fantasy for long enough to have figured out all the ways it might go wrong, and why it would almost certainly fall short of my imagination. But my imaginary castle of socialization still shimmers in the mist for me, a glimpse of the sort of togetherness I dream about.