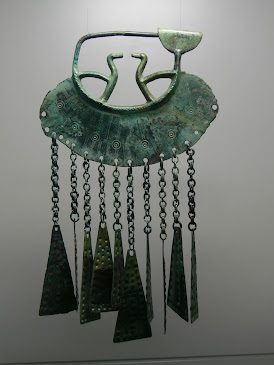 Two hoards of Viking silver found in Norway, one cut into pieces ("hack silver") and one of intact objects.

The Verge welcomes Elon Musk to his new role: "Twitter is a disaster clown car company that is successful despite itself, and there is no possible way to grow users and revenue without making a series of enormous compromises that will ultimately destroy your reputation and possibly cause grievous damage to your other companies." And this: "The essential truth of every social network is that the product *is* content moderation, and everyone hates the people who decide how content moderation works."

In Ephesus, an ancient Greek city in Asia Minor, archaeologists have unearthed a Byzantine shopping district violently destroyed around 615 AD, burying lots of great stuff in the ruins.

The inevitable result of violent protest in a democratic society: "Bitterness over looting and destruction that followed the police shooting of Jacob Blake could help tip a governor’s race in the direction of Republicans." (NY Times)

"How the Pre-Raphaelites became Obsessed with the Wombat." Now, I ask you, did anyone out there know the Pre-Raphaelites were obsessed with wombats? Don't tell me you've never learned anything from this blog. Consider: "A remarkable drawing of Jane Morris and the wombat in the British Museum illustrates the degree to which lover and pet merged in Rossetti’s mind as objects of sanctification."

Plastic recycling is a myth: no more than 5% of the plastic collected for "recycling" in the US is ever recycled. Which is actually a good thing, since with current technology it takes so much energy. The obsession of some people with recycling products like glass and plastic, instead of just burying them, is one of the irrational exuberances of the environmental movement.

At The Atlantic, David Frum covers the latest history wars blow-up, which started when the president of the American Historical Association decided to post a little essay about whether historians are too involved with the present and not enough with the past.

The story of the Ely Copper War, one of the many stand-offs between workers and militia in nineteenth-century America. This one ended peacefully, partly because when the militiamen saw how hungry the miners and their families were they forgot about fighting and starting sharing out their food.

Ezra Klein touted his podcast interview with Pippa Norris as offering "a powerful theory of why the far right is thriving across the globe." But this turns out to be the obvious theory, which is that social and cultural change since 1960 have just been too fast for many (mostly older) people, and the new right wing politics is the reaction against all that change. (NY Times, Google podcasts) One interesting point concerns the appeal of "transgressive," obnoxious, bullying leaders: many people feel cowed by the views of the established majority, so that they can no longer say what they think, so they find it appealing when people come along who refuse to be cowed, who refuse to be bound by any rules or norms that keep them from speaking their minds. If you want democracy, stop making people afraid.

Early Saturday morning, Ukraine attacked Russia's naval base at Sevastopol in Crimea using a combination of aerial and naval drones. Summary of what was known about the attack on Saturday evening here. (Update: no visible damage to the Admiral Makarov, although some observers think its steering may have been damaged, and only a little damage to the rudder or screws of a modern ship can require drydocking.)

Finns respond to Russian media reports that they are freezing due to Russia's energy embargo.

Of the first 89 recently mobilized Russians known to have died – known by name, that is – 23 died during training. "The causes of their deaths vary: physical altercations, alcohol, drugs, suicide, and accidents."

Thread summarizing an article on one group of mobilized Russians who were sent to the front with minimal training, suffered badly from artillery fire, and were led to the rear by their only surviving officer. Now they are being threatened with court martial and some say they are ready to go to jail rather than back to the front.

Summary of the military situation by a western expert just returned from a tour of Ukraine.

The inevitable result of violent protest in a democratic society: "Bitterness over looting and destruction that followed the police shooting of Jacob Blake could help tip a governor’s race in the direction of Republicans."

"Inevitable" my arse. Plenty of democratic societies don't work this way - French protests are a great counter-example. They routinely get at least somewhat violent, and they also are FAR more effective at prompting changes in government policy on a regular basis.

A big part of this is the French parliament being made up of nine parties, rather than being a two-party system. This promotes a much higher degree of flexibility in policy, and disincentivizes partisan politics and digging heels in, as every party is reliant on cooperation with other parties to remain relevant in government via power sharing.

So you've got an objectively MORE democratic society in France, where violent protest can and does work, achieving it's aims of reshaping government policy fairly frequently. (Admittedly, usually those positive results are in areas of tax and labor law changes, with far less success in areas such as minority rights, but still...)

On the issue of violent protest helping Republicans, Ezra Klein interviewed a group of political scientists recently (NOT the Pippa person) who said they looked as hard as they could at the data, and did so for an extended period of time, and the net effect they observed was a slight tip in local politics in favor of Democrats.

They didn't offer any hypotheses to explain this. Here's one (for free), which is that anyone inclined to vote for Republicans because of violent protests was already going to vote Republican anyway, whereas local protests at police killings etc. motivate some persons who, for a variety of possible reasons, might not be inclined to vote at all to come out for liberals.

France is a good counter-example; I hadn't thought of them. But I believe that Germany and Britain are more like the US in this respect.

What I see in America is that police reform has failed almost everywhere, and polls show that this electoral season worries about crime and rioting are FAR more salient than worries about police misbehavior. I can't see that the recent wave of protests changed anything at all, and this election looks to be a Republican wipeout. Fear of crime and riot is not the main reason for that but I believe it is an important factor.

@G- it is certainly true that American voters are far more tolerant of violence by white police than black protesters. Which is why the leaders of the Civil Rights movement committed to nonviolence. They were right. Violence in *this* context only helps Conservatives and racists. Complaining that this is unjust does no good, because it is the reality, and political battles have to be waged within that reality. If the American left would commit to universal nonviolence we would have achieved far more progress.

It's true that crime and black protest are major rightist talking points. But that's been true since the mid-sixties, and regardless of recent actual events (remember Republicans campaigning on rising crime during the nineties?).

I do doubt the kind of universal liberal quietude and restraint you seem to be calling for is possible. The left exists, black protest exists, non-binarism or whatever one wants to call it exists, and they're not going away and they're not going to shut up, whatever one thinks of them. I'm not part of any of these movements--I just think it's so, for better or worse. Quietude is also in itself not much of a strategy for victory. It may be a strategy for survival, in itself no bad thing. But it won't change the balance. Indeed I suspect that, for the foreseeable future, there is in fact NO national formula for liberals to do much more than survive and occasionally eke out narrow breaks in rightist dominance. In other words, I don't think what liberals do or say is going to matter much either way, for the next few years. Rightist dynamism and their propaganda machine are simply, in this historical moment, too powerful.

For things to change in any dramatic way, I think it will take a powerful external event.