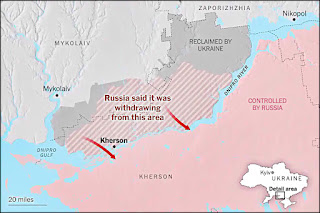 Russian armed forces are withdrawing from Kherson in southern Ukraine, along with all the territory they controlled on the west side of the Dnipro River. This was announced by the MOD in Moscow and seems to have been largely completed by now (7 AM EST). So far as we know, most Russian troops have withdrawn safely. No doubt they will leave a lot of gear behind, but they seem to have been removing their most valuable assets (SAMs, Electronic Warfare, modern rocket artillery) for weeks and have likely gotten much of that across.

Obviously the situation is still unclear and there is a lot of chaos, so maybe Ukraine will round up a lot of prisoners yet. In a Telegram post from Wednesday night, one Russian soldier said "The last order was to change into civilian clothes and f*ck off any way you can." But so far there is no sign that a single large body of Russian troops has been captured. 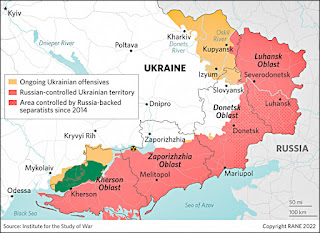 The area Russia is abandoning is in green

This is a major victory for Ukraine. Kherson was the only regional capital Russia conquered during its initial invasion, and the largest city they were able to take. Surrendering it is a significant blow. Because Kherson has not yet been much fought over, it is still largely intact and thus a valuable asset for Ukraine.

On the other hand, military experts have been saying for months that it would not be possible for Russia to hold on west of the river, with the bridges blown and ferry traffic under constant artillery fire. Supply was too difficult. Also, withdrawing east of the river will free up thousands of men that Russia desperately needs elsewhere.

Two questions. First, what does this mean for Russia moving forward? Will this be a decisive blow against their morale? Will it lead to more political shakeups? 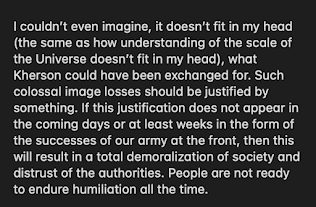 Many people are wondering why the Russian MoD announced the retreat from Kherson on TV. It was done to show that it isn't a retreat, but a controlled withdrawal process. It was also done by the MoD, so Shoygu and Surovikin take all the blame and Putin bears no responsibility.

So, obviously, this is bad for Russia, and it might turn out to be very, very bad.

But I am not certain it is a great sign for Ukraine, either. When your enemy has been signalling his imminent withdrawal for months, and then announces it on television, and you still can't trap any significant portion of his force, what does that say about your army? Except for during the Balakliya -Kupyansk breakout in September, the Ukrainian army has always moved slowly and methodically. And even during that September rampage, they pulled up short. When they took Kupyansk the town of Svatove was open and undefended, ten miles ahead of them, but rather than lunge forward to sieze it, they stopped at the Oskil River. Now they have been slowly pushing toward Svatove for a month, taking losses the whole way.

They have forgotten the old military lesson that if the enemy is running, you have to pursue until your men drop.

At the start of a campaign, to advance or not to advance is a matter for grave consideration, but once the offensive has been assumed, it must be sustained to the last extremity.

Or, from a different sort of military leader, Nathan Bedford Forrest:

You gotta keep up a skeer.

Shaped by years of trench warfare in Donbass, Ukrainian commanders seem to lack the aggression and speed necessary for decisive attacks. Perhaps they are very worried about the setback that the loss of an armored spearhead would represent, both materially and morally. Perhaps on a battlefield where Russia has more planes and lots of drones and still plenty of modern artillery, this really would be extremely dangerous.

But if you project Ukraine's rate of progress into the future, it would be many years before they achieved their goal of reconquering all their territory. To have any chance of reconquering all or most of that land, they must be willing to take much bigger risks than have so far. In Kherson they seem to have waited for their artillery to make the Russian position untenable, then walked along behind the retreating Russians, thinking that retaking all these towns without a fight is good enough.

Unless there is some kind of dramatic change in Moscow, this is going to be a long, long war.

Is there any scenario by which Ukraine could force an end to the war with a military victory alone? Maybe I'm missing something, but it has always seemed to me that the decision of how long the war went on was going to lie in Moscow, and that that would be largely political. In that scheme, perhaps the Ukrainian government has decided that absolutely guaranteeing the preservation of their own military capacity is more important than any amount of smashing up the Russian army. (If you want a historical example of such a decision, consider Washington.)

There's also been a lot of talk recently about Ukraine's rebuilding costs. Perhaps an intact town is more valuable to them than a lot of dead or captive Russians.

I'm not sure quoting 19th century generals who fought with muskets and cannons (both of whom ultimately LOST utterly) is quite the rhetorical blow you think it is, John.

Unless there is some kind of dramatic change in Moscow, this is going to be a long, long war.

Russia is already in the midst of dramatic change. Their economy is in shambles and is only going to get weaker, faser; faith in the Kremlin is unraveling, with lots of infighting and uncertainty growing by the day; and - perhaps most important of all - Ukraine keeps pummeling the Russian ego and delivering embarrassment after embarrassment.

That last point is incredibly important because once the Russian will to continue the war breaks, the end comes VERY swiftly. Once the populace can no longer cling to the lies of the Putin regime - once Russia is not just a laughingstock in the eyes of the world but also in the eyes of Russians themselves - the war ends within days, because at that point it no longer has any reason to continue. Ukraine appears to be seeking to break the Russian spirit, and they've been succeeding slowly but VERY surely at achieving that aim.

This was exciting news. Just few days before people were posting about Russians digging in, that withdrawal is psyop etc - and now paf! They are gone. I couldn't believe in that initially and I waited for official confirmation.

As for offensive, soldiers have to get rest sometimes. And offensive over open terrain is rather risky.

Heh, I have downloaded a podcast with discussion of chances of Ukrainian offensive, recorded BEFORE the news of Kherson capture. I wonder what analysts will be saying - it would be fun to compare their prediction with what happened just two days later :D

I actually like the game of trading quotes from bygone ages. That said, I agree such quotes are not absolutely probative, because you can always find counter-examples. My personal favorite, where the lesson is quite different from Napoleon's and Forrest's, comes from the Renaissance Italian, Marshal Trivulzio. Asked by Louis XII what was needed to conquer Italy, the Marshal answered, "Money, more money, money all the time." (The original French seems to be, “Pour soutenir la guerre, trois choses sont nécessaires: de l'argent, de l'argent, et encore de l'argent”; I'm not sure where I read that English version, but I like the rendering.)

There's a perennial debate about whether war is a contest of masculinity and testosterone, and best won by boldness, or whether it is more a contest of resources best played with caution and sheer, dumb endurance. The problem is that, as Machiavelli admitted, one's answer to this depends very strongly on personal taste. In fact, of course, probably the best thing is possess both the preponderance of resources and a bit of boldness at the right time (e. g., Sherman's March to the Sea).

I think there's probably room for many different ways to analyze what's best for Ukraine at this moment. Loss of 20,000 of their better troops might have really shattered the Russians and made for a major, quick change in Russian politics; but there's always a risk in going until one's troops are exhausted and have outrun their supplies. And, as a friend of mine put it, "The Ukrainians got a mud weather roll."

I would add that there are plenty of examples where the received wisdom (not necessarily wrong for being received) is that a general prolonged a war by failing to follow up a battlefield victory, when a vigorous pursuit could have ended it (most famous is McClellan after Antietam, recently cited by John). But by the same token, there are numerous historical examples of defeat snatched from the jaws of victory by trying to exploit a battlefield victory too much, and sending one's troops out too far too fast (consider MacArthur at the Yalu).

My impression is that the terrain in that part of the Black Sea coast is pretty marshy, and not good for the offense. But I'm personally pretty risk-averse, so maybe I'm just rationalizing my own inclinations.

Though there is also probability this is just an accident, accidental ignition on corn dust which destroyed a tractor. Let's hope for the latter. The Polish twitter is in rather military mood right now.