The Vermand Treasure and the Culture of Early Medieval Europe 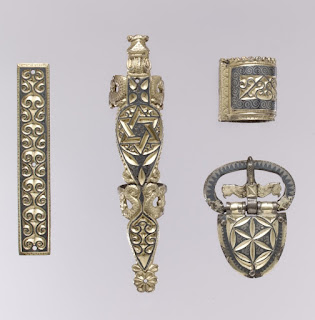 The Vermand treasure was excvated from a grave in northern France by a professional archaeologist named Benoni Lelaurain. Nobody seemd to know the date; the sources I have found all say "last quarter of the nineteenth century." Which is the first of many weird things about these artifacts. Why didn't the article published on these finds in 1904 mention when they were found? Perhaps the property had changed hands at some point? Was someone cheated? Did Lelaurain's notes not have a date? 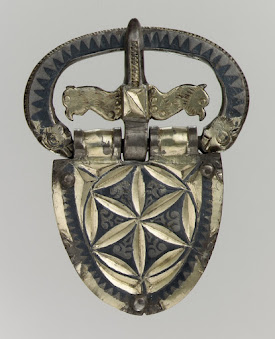 That 1904 publication said that these were Merovingian artifacts dating to the 6th or 7th century. But a second study in 1951 found that they were actually late Roman, likely dating to around 350-375 AD. Which is an important point. We associate Roman art with the classical style, but what we think of as the barbarian style of the early Middle Ages actually began its development under the empire. Classical snobs used to blame this on Germanic interlopers and call it "barbarianization," which is probably true in part, but it might be safe just to say that the empire was changing and styles of ornament were changing along with everything else. 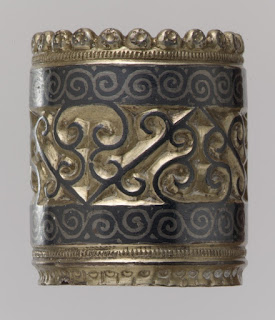 What remains of the treasure is in the Metropolitan Museum, having been snatched up by one of J. Pierpont Morgan's roving buyers. According to the original excavator the grave had been robbed in Antiquity, but those must have been some of history's least efficient grave robbers. Maybe there was a golden bowl sitting on the corpse's chest so they just grabbed it and ran? 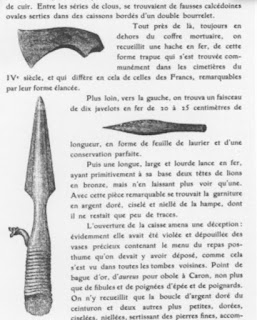 Lost ax head and other objects from the 1904 publication 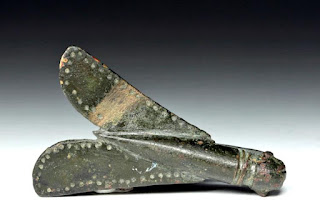 Everyone seems to agree that the man buried in this grave was a barbarian soldier in Roman service. Vermand was at that time the site of a Roman headquarters, part of the frontier defenses of Gaul. The weapons are of Roman type, and the grave was within a late Roman cemetery. But in a 1986 publication, a Met curator named Deborah Schorsch argued that some elements of the decoration are unusual and suggest a more exotic origin. In particular she focused on a small fibula in the shape of a cicada, one of the artifacts that was lost from the local museum. These appeared on the Ukrainian steppe around 300 AD and were widely used in eastern Europe over the next 150 years or so. In the early period they are quite rare west of Hungary, and when they do show up in the Empire that is generally taken to be a sign of Huns, Goths or Alans breaking in. Incidentally the first people to give much attention to cicadas in their art were the Chinese, who associated them with resurrection, so this may be one of the ideas that spread across Asia from one end to the other. (Like the Cindarella story or the Three Hares motif.)

All of this would make the Vernand Treasure one of the many interesting traces of steppes culture in western Europe. The most famous is the Sword in the Stone motif, which comes from the Sarmatians. They worshipped their war god wherever they happened to be on the vast steppe by sticking a sword into a cairn of stones and praying toward it. The Merovingian kings were Franks, but many of their rituals seem to have come from the east, including ringing their royal burials with sacrificed horses. According to Schorsch, the decoration on this spear shaft ornament also looks more like objects from eastern Europe than anything found within the empire; notice the dragons.

(The six-pointed star, incidentally, was widely used across the Empire, not just by Jews.)

I think this is important because of how it relates to a question I have written about here before: what happened to the Roman empire? Why did it never come back, as the Chinese empire kept doing? Why was medieval culture in western Europe so different from classical culture? I believe the barbarian kings and warriors had a lot to do with this. They had their own art, their own stories, their own values, their own kinship systems, their own politics, and they kept much of those things even after they settled within the empire. The war leader of Vermand fought for the empire and used standard imperial weapons, but he expressed his own identity through details like the decorations on his spear and the cicada fibula on his cloak. Perhaps he knew ancient epics of Gothic or Sarmatian heroes, and liked to hear them chanted in his camp rather than Roman marching songs. His descendants were like him; they took much from imperial culture but they did not surrender their identities. In their hearts they remained Franks or Goths, not Romans, and so the world they helped to make would never be a Roman world.
Posted by John at 1:08 PM