Sex Abuse in the Baltimore Diocese; Or, What Secrets is the World Hiding? 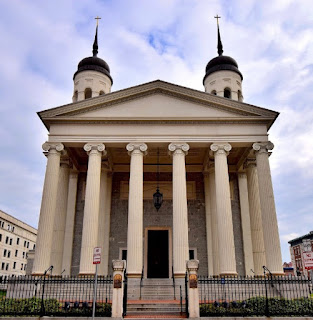 The state of Maryland has finally completed their report on sex abuse in the diocese of Baltimore, the oldest in the United States. The full report hasn't been made public yet, but details laid out by the investigators in a press conference yesterday were pretty grim. NY Times:

The filing says the Archdiocese failed to report many allegations of “sexual abuse and physical torture” and neglected to remove accused priests from active ministry or even restrict their access to children. Some congregations and schools had more than one abusive priest there at the same time. “The sexual abuse was so pervasive that victims were sometimes reporting sexual abuse to priests who were perpetrators themselves,” the filing states. One congregation was assigned 11 abusers over 40 years. . . .

Mr. Frosh said many of the instances of abuse would have been categorized as misdemeanors at the time they were committed, which means the statute of limitations for criminal prosecution has expired. He said most of the claims in the report are clustered in the 1970s and 1980s, with some before and after.

Ok, we all know this story by now. But for me, every detail we learn about sex abuse in the church over the 1965 to 1990 period raises more questions about the world as a whole.

First, when did this start? Many conservative Catholics believe that while there was always some sexual abuse in the church, the epidemic that has torn the church apart is a modern, post-Vatican II phenomenon. In other words this started outside the church, with the sexual revolution and the rise of gay rights. I doubt this is true, but we really don't know. The Maryland report, like the Pennsylvania, Los Angeles, and Boston reports before it, documents mainly events from the 1965 to 1990 period. I suspect that is an accident of timing, having to do with the age of the victims when the scandal broke, but I can't be certain.

Maybe sexual repression really was more effective in the Olden Days. I have listened to at least two interviews, young people interviewing old people who grew up before World War II, where this came up. The young people were amazed that the oldsters actually never had sex until marriage, and the oldsters were bemused to be questioned on this. Not, of course, that everyone waited until marriage, but I feel quite certain that millions of people did. So maybe more priests really did stick to their vows back then.

I fear that the question of how much sex abuse there was in the church before 1965 is unanswerable.

And the same as regards the bigger question: how much sexual abuse of children was there in the world?

A lot, I suspect. We know that whores as young as 12 could be had in every city, and that rakes like Casanova made no secret of their preference for girls. Sexual interest in boys inspired thousands of erotic poems across Asia. In a world where many people were losing teeth by 25, it was a cliche that feminine beauty was a fading flower. "The season of girls is short," says a character in Lysistrata, a comedy by the ancient Greek playwrite Aristophanes, pleading for the war to end before a generation of girls misses their chance to marry. Greek girls married young, so the question comes up in a different form in northern Europe, where most people married in their 20s. You might think that surely they were having plenty of sex before then, but so far as we can tell rates of illegitimate birth were low.

What about closer to our time, in the Victorian world of starched collars and whalebone corsets? Despite 150 years or prurient curiosity, we just don't know, because most people resolutely refused to talk or write about it. One part of me wants to say, sexual desire is universal, and if any society pretended to have it under control, that was pure hypocrisy. But that is just my prejudice, based on no very good evidence. Many nineteenth-century people saw their world divided into night and day worlds; in the sunshine world of married families, morality was strong, with vice mostly crowded into the nighttime world of big city gangsters and whores. Maybe they were right, although I doubt it.

I look at world of 1850 to 1950 and wonder; how different was their behavior from ours, really? Were things really better? Or did the tougher standards on sexual behavior just mean that everything was more thoroughly hidden, not even whispered about? Freud famously had so many female patients report being sexually abused that he decided they must be making it up; even an observer as perceptive and cynical as Freud had no idea so much abuse was going on all around him in respectable Viennese society.

I believe Freud's patients were telling the truth, and that their confessions open a window into what the allegedly moralistic nineteenth-century world was like: shameful crimes in abundance, but hushed up by a grim wall of silent propriety.

But I really don't know.

Many conservative Catholics believe that while there was always some sexual abuse in the church, the epidemic that has torn the church apart is a modern, post-Vatican II phenomenon. In other words this started outside the church, with the sexual revolution and the rise of gay rights.

Of course they do.

Except of course, all this was going on back in the 11th century, too. Never mind how many Popes had illicit wives, concubines, and whatever else. There's even a wiki entry on it

To my mind, having a wife is not sex abuse.

This might be another part of the picture; when attitudes about priests having concubines grew stricter, sexuality was forced more underground, leading to more abuse. But in recent years insurance companies charge all churches the same price for insurance that covers sex abuse charges by their clergy, since they find that married Protestant pastors sin at about the same rate as celibate priests.

"One part of me wants to say, sexual desire is universal, and if any society pretended to have it under control, that was pure hypocrisy. But that is just my prejudice, based on no very good evidence."

If priests and popes had wives, and/or concubines, I don't think it's insane to assume that a certain percent of them were abusing children as well. People are open about sex now, and there is a certain level of child abuse. People then were closed about sex, and there was a certain level of child abuse. It's pretty clear that if child abuse still happens today, when children are taught about abuse, and told to report it, that there was at least as much back when there was dead silence about such matters.

My Grandfather’s wife, an RN, worked in a home for wayward Catholic Nuns and Priests in the 1950s. She hated Catholicism after that and told me that she knew of horrific things she could never repeat. She lived in New Jersey.
One of my instructors in Air Force Air Traffic Control School in Biloxi MS was a volunteer counselor working with young people. He spoke frequently about the abuse, sexual and physical, that he saw. He said it was everywhere, in a strata of society (1969). He had been doing this work for a long time.
My Unit Commander, who I babysat for, began dating his deceased wife when she turned 11 with the permission of her family (He was ~20 and in the Army). She birthed their fist child at 15 and tried to kill herself when pregnant with her fourth. Once she had birth she succeeded at ~20 years old. (Meridian MS). He gave the children to relatives, and went to VN for the second time.
Based on my experience, I believe abuse is ongoing and has been for all human time. Think of the abuse slaves have endured.