Saving Louisiana, or Destroying It? 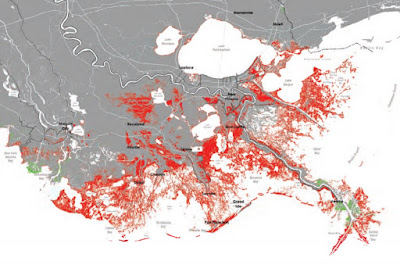 Long article by Nathaniel Rich in the Times about the $50 billion effort to keep southern Louisiana from washing away. Rich writes a fair amount about climate change but that really isn't the issue; the issue is that since we confined the Mississippi within levees all the way down it no longer dumps silt into the marshes with every flood, which is how the marshes came to be in the first place. Without fresh silt, they are disappearing at a stupendous rate.
With an infusion of $4 billion from the BP oil spill settlement, the first stages of the rescue plan are under way. Rich considers the program from two points of view: the high level question of whether Louisiana will survive, and the low-level point of view of a fishing captain named Kindra Arnesen he met at a public meeting:

“We have to be present, or they can say there’s ‘no opposition,’” Arnesen said. “I see this as doomsday. This will end us.”

This was the centerpiece of the master plan: the construction of new, man-made diversions in Plaquemines Parish [south of New Orleans]. The state would cut open the federal levee, creating powerful new distributaries of the Mississippi River that will flush sediment into the marsh, building land. These engineered floods would simulate the geological process that created the Mississippi Delta in the first place. The initial two incisions are to be made in the levees about 25 and 35 river miles south of New Orleans. Construction on the mid-Barataria Diversion on the west bank, could begin as soon as the end of 2022, followed by the mid-Breton Diversion on the east bank. Once running at full capacity, the diversions would themselves rank among the nation’s largest rivers. Both will flow at more than two times the volume of the Hudson River. Over the course of years and decades, it is hoped, the gargantuan volume of sediment borne by the diversions will patch the holes in the marsh’s moth-eaten fabric. Lost species will return and biological diversity will increase. The local fisheries might ultimately become even more productive.

In the short term, however, the diversions will transform the delicate estuarine ecosystems. They would likely massacre giant populations of oysters, brown shrimp, blue crab and dozens of species of fish. Areas of brackish water will turn fresh, and saltwater vegetation will die. Plaquemines Parish has the largest commercial fishing fleet in the continental United States. Arnesen worried that the diversions would destroy it.

And she is right to worry. But what is the alternative? Do nothing and Plaquemines Parish will cease to exist in 50 years. This can't be done on a small scale; immense amounts of water and silt have to be rerouted, or nothing will be gained.
Rich gives us another lesson in how quickly circumstances can come to seem normal, and for people to begin depending on them. Arnesen grew up harvesting oysters in salt marshes, and everyone in Plaquemines Parish thinks of this as the old way, now threatened by the diversions. But until the levees went up in the 1950s, those marshes were drowned in silt every year or two, so oysters must have been few and far between. Rich quotes one local as saying that his neighborhood "never" had high water during hurricanes until after the post-Katrina floodwalls went up around New Orleans, but that is absurd; again, the whole parish is built of silt deposited by the river in its floods. Nobody seems to even remember life before the levees.
And this is just stage one, politically the easiest lift; future plans for the area west of New Orleans call for drowning entire towns.
Personally I do not think we know how these ecosystems will change after the diversions, so it will be years before we know how fishermen will have to adapt. I hope we are generous in helping them do so. But I don't see that we can afford to put off the whole effort because of what the impact on a few thousand people might be. Arnesen sees it differently:

“I don’t just do this because it’s my living,” Arnesen said as she left the meeting, trailing an entourage of well-wishers. “They’ve made our community feel like we’re the trade-off and we don’t matter. It’s easy for the state to say they’re going to come up with an adaptation plan. But what’s the point of an adaptation plan if the end goal isn’t the survival of the people you’re trying to save?” 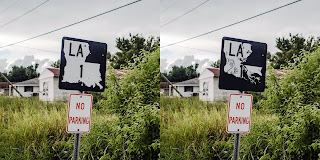 It's a hard question, but holding to the status quo is simply impossible; Louisiana is losing an acre of land an hour and has lost 2,000 square miles since 1930. Like several US states, Louisiana's signs for state roads feature the state's outline, and one group of activists has been driving the point home by repainting the signs to show how the state will look in 2050 if nothing is done.
If the land disappears, they people will have to move on anyway, so we might as well save the land even if the people's livelihoods are ruined in the process.
Posted by John at 8:31 AM

"If the land disappears, the people will have to move on anyway, so we might as well save the land even if the people's livelihoods are ruined in the process."

The thing is, 2050 is thirty years away, and many of the people who oppose action will be retired, deceased, et cetera by then, and all they care about is not having their situation upended in the short term. The don't want to "lose out" now, when they could instead face the music later, regardless of the long term damage.

It's a sort of real life trolley problem. Throwing a switch to divert a runaway trolley so that it hits only one person rather than five is clearly the lesser evil and the more moral decision, but if given a choice between letting five strangers die and diverting the trolley so that it hits the switch-thrower's child or loved one, suddenly you get a lot more people who would refuse to save the greater number of lives, because their own selfish desires impede their morality.

Likewise, this river diversion is clearly the lesser evil, and yet many of the people who stand to lose personally would rather condemn themselves and countless innocent strangers to needlessly suffer down the road, than accept their own misfortune now in order to spare the rest. It's not rational, it's supremely selfish, but it is wholly predictable, and we need to be prepared to mitigate the opposition and help accommodate and compensate these people generously, to ease the tensions around this endeavor.

...of course, we'll probably just do what we usually do - ignore the people caught in the cracks of society, and keep funneling obscene amounts of resources into warfare, incarceration, and oppression instead. Instead of helping the people who the system fails, we'll just demonize and punish them instead, as is tradition.