Will the Shetlands Secede from Scotland?

Here's the thing about secession: it's a game everybody can play:


The Orkney and Shetland islands could remain part of the UK if the rest of Scotland votes to separate, according to a report submitted by their MSPs to the Government. The islands could even declare independence themselves, it adds. 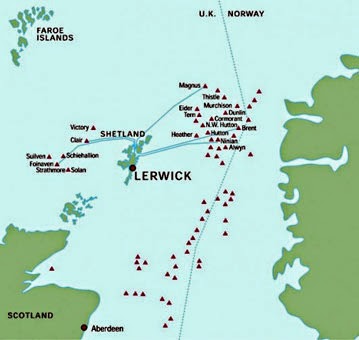 Sadly, the particular post I linked to was partly based on a hoax -- the Dr. Leif Erickson thing should have clued me in. Just goes to show that my reason gets clouded when I am too emotional, which is why I try to stay away from emotion. (Feelings - ugh.) But there really are rumblings about secession in the Scottish islands, specially Shetland and Orkney. The Guardian:


Once you stir the nationalist pot, you can never know where it will lead. Residents of Orkney, Shetland and the Western Isles are petitioning the Scottish parliament at Holyrood for the right to hold their own referendum on independence, but this time from Scotland rather than the UK. In one scenario, the islands might vote to leave Scotland and remain in the UK.

This may be partly trolling, but the trolls have a point -- Shetland (the preferred form, rather than the Shetlands as I have it above) really is more distinct from most of Scotland than most of Scotland is from the rest of the UK. Most of the news about secession is the islands is from last spring or earlier, so there doesn't seem to be much agitation about this issue right now. But wait and see; this could boil up again if Scotland as a whole votes to secede but Shetland and Orkney vote strongly to stay in the UK.

This essay by Bagehot at the Economist seems to be a very measured take on the islands' likely future.
Posted by John at 12:18 PM

I just click on the link, and, alas, it turns out that the Shetland independence story was a joke. There's an update at the bottom of the story that explains it. Too bad, it would have been lovely to see the parochialists get a taste of their own medicine.

Awesome. But if you keep reading you see that the jokes are based on actual uneasiness in the Shetlands about Scottish independence, and actual threats by certain Shetlanders to secede.