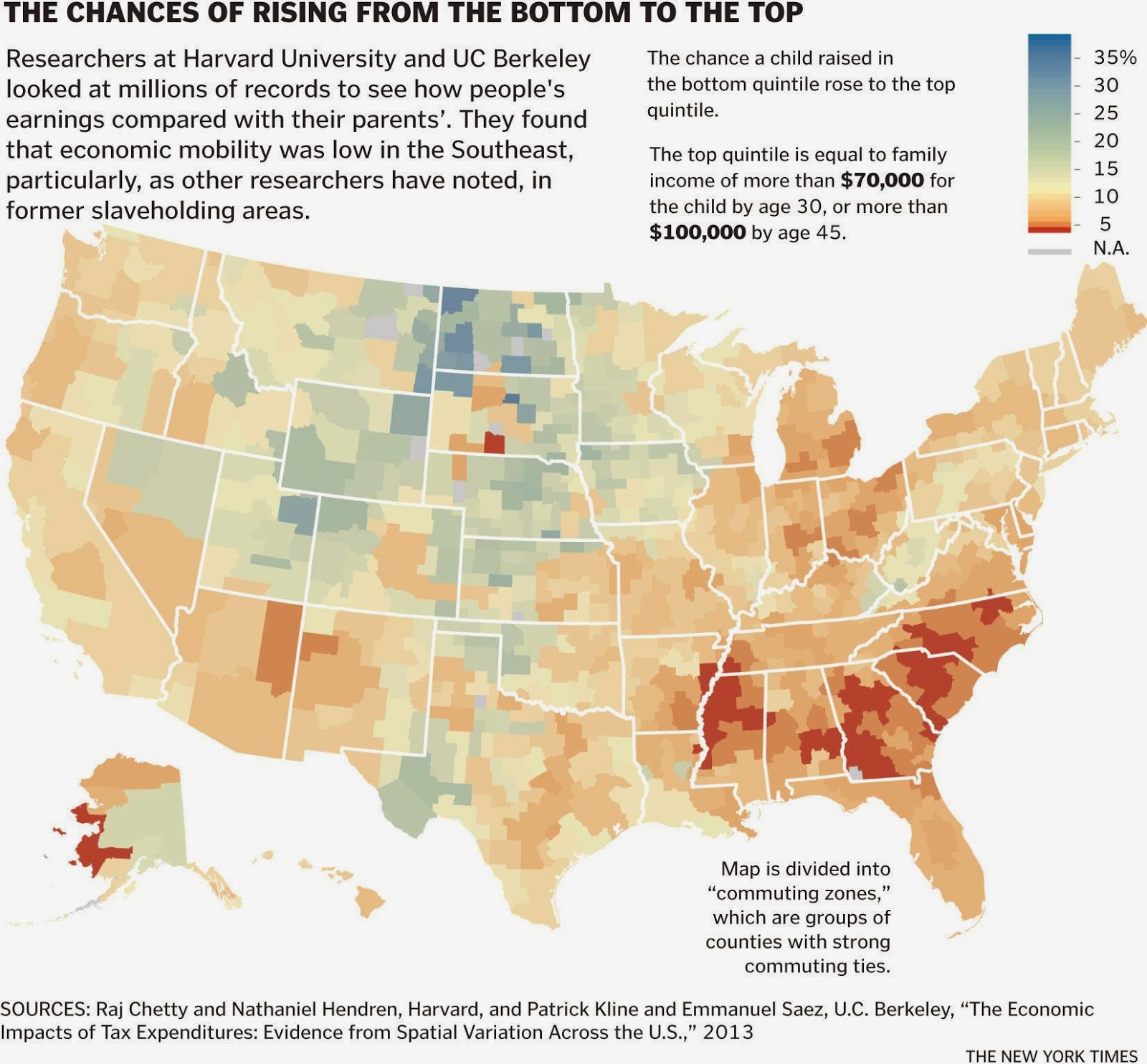 This fascinating map shows one measure of the degree of economic mobility in the US, the chance that a child born in the lowest quintile of income will rise into the top quintile. The areas with the lowest mobility are all places that were either dominated by slavery before 1860 or are dominated by reservation Indians today. Race is a big factor, but, says Stephen Mihm in the Globe, the number of blacks in an area today correlates less well with the map than the number of slaves in 1860 does. And, economic mobility in the red areas is also very low for white residents; poor whites in areas with many black residents are more like their black neighbors than they are like whites in the upper Midwest.

Economic historians have been arguing for decades about why this should be. Two of the top figures in the field are economic historians Stanley Engerman and Kenneth Sokoloff, who published a paper in 2002 asking why some parts of the Americas have been so much more economically vibrant others, and less troubled by inequality.


The answer, they argued, lay in the earliest history of each country’s settlement. The political and social institutions put in place then tended to perpetuate the status quo. They concluded that societies that began “with extreme inequality tended to adopt institutions that served to advantage members of the elite and hamper social mobility.” This, they asserted, resulted in economic underdevelopment over the long run.

More specifically, they observed that regions where sugar could be profitably grown invariably gave rise to societies defined by extreme inequality. The reason, they speculated, had to do with the fact that large-scale sugar plantations made intensive use of slave labor, generating institutions that privileged a small elite of white planters over a majority of black slaves. These institutions, their later work suggested, could encompass everything from property rights regimes to tax structures to public schools.


not everyone buys the idea that the past can structure the present in such an enduring, predictable fashion. . . . “The persistence of inequality per se is a myth,” says Stanford economic historian Gavin Wright, pointing to research that highlights the degree to which inequality has ebbed and flowed in Latin America.

Wright counts himself “unconvinced” regarding comparable claims about the United States. “No doubt slavery has played some kind of background role,” he concedes. But he sees the relationship between historical slavery and contemporary inequality as an interesting correlation, not a directly causal one. Correlating one variable with another across the centuries “isn’t the same as writing history,” he notes. “If you don’t connect the dots, you’re just groping.”

If you ask me, what makes this correlation real is the persistence of political traditions and social attitudes over time. A historical thread connects the slave society to segregation to hatred of Obamacare, expressed as resentment of busybody outsiders, respect for local tradition, pride in self-reliance, and acceptance of extreme inequality as a natural expression of the way things are. These patterns have proved very, very difficult to change.
Posted by John at 12:19 PM