Why Scots Voted Yes or No 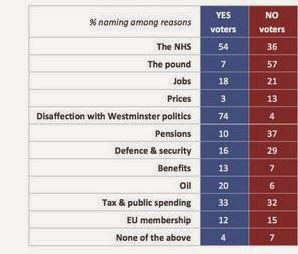 Responses to the question, "What were the two or three most important issues in deciding how you ultimately voted?"

Notice that dissatisfaction with Westminster policies came in at the top; the energy driving the Yes camp came largely from anger over the way Britain is governed right now. Which is very similar to the way the U.S, Germany and lots of other countries are governed, and can be put down as another sign of widespread dissatisfaction with the current political order. Which nonetheless remains the dominant political order because there is no real alternative.

But I also notice that whoever wrote this poll did not think to ask about plain and simple nationalism; no choices like, "Because I consider myself Scottish and hate being ruled by Oxbridge toffs."
Posted by John at 11:12 AM