Archaeology in the 2010s: the Paleogenetics Revolution 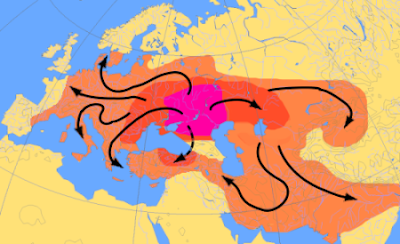 In the past decade, by far the most important development in archaeology has been the technology of paleogenetics, which is allowing us to answer questions I thought would be debated forever.

The technology works like this: DNA is chemically extracted from bone or other human remains and run through a sequencer. Powerful computers then read the various DNA sequences that emerge and discard all those not related to the problem at hand, such as viruses or bacteria, which are often the vast majority of the sample. The human DNA -- or sometimes other species, if that is what is being studied -- is then compared to databases of human genomes. It is rare for a nearly complete genome to be discovered; a genome is considered "high quality" if it is more than 5% complete. But a 5% sample of the 3 billion base pairs in the human genome is usually enough for high quality statistics. The differences between different human populations are small, on the order of 0.1%. Again, with 3 billion base pairs to work with the differences still stand out.

But I want to emphasize that all of this statistical, and it depends on assumptions made about which mutations represent important forking points in our genealogies and so on. I think this is great science but it is still very new and some of what I write below may turn out to be wrong. Most of it may turn out to be oversimplified.

I would summarize the main discoveries of paleogenetics so far as follows:

2) Native Americans almost all descend from a single migration of people from Asia that took place on the order of 15,000 years ago.

3) Agriculture was spread into Europe by a mass migration of farmers from Anatolia, who genetically replaced most of the native foragers. Those farmers contributed the largest share of the genes of modern Europeans. The data for Asia is not as good but so far it looks like the major ethnic groups of East Asia, including Han Chinese, Koreans, and Japanese, are descended from early farmers who spread out from the Yangtze Valley.

5) In the Bronze Age, the people of the Black Sea steppes spread very widely across Eurasia, making major contributions to the gene pool from Ireland to India. These people presumably spread the Indo-European languages. The details of this process are still not certain, but the fact of population disruptions between 3300 and 2500 BCE is clear. There is a simple statistical test that can show if one population could be the product of two others, and it shows that medieval Europeans could not be descended just from native foragers and Middle Eastern farmers; a third major contribution is needed.

6) European history after the Bronze Age continued to see migration on a large scale. The Bell Beaker invasion of Britain and Ireland around 2200 BCE may have resulted in the replacement of 80% of the population.

8) Historians have been arguing about how many Anglo-Saxons came to Britain for 200 years, with no result. Was there a mass migration, or just a coup by elite warriors? But now genetics suggest that about 25% of the genes in Britain come from Anglo-Saxon invaders. Even if they were genetically more successful than the natives, this still requires tens of thousands of migrants, and probably more than a hundred thousand.

The discoveries continue to pour in and the science is still getting better by leaps and bounds. We now have the technology to study family relationships as well as group connections, and this will also be a fruitful avenue of research moving forward.

My mind is still blown every time I think about these discoveries, which have opened a huge new window into the past.
Posted by John at 2:03 PM

Historians have been arguing about how many Anglo-Saxons came to Britain for 200 years, with no result. Was there a mass migration, or just a coup by elite warriors?

There's almost never a coup by "just the elites". The common foot soldier is the lynchpin, and unless you can sway local forces to accept you as their rulers wholesale, you need to bring in at least some of your own troops to impose your rule upon others and help "convince" the locals to fall in line.

For every single elite soldier clad in the finest armor and armed with the most sophisticated weaponry, you must have hundreds or thousands of "grunts" wielding cheap spears and wearing munitions grade armor (if they're lucky enough to have armor at all!) to fill out the bulk of a pre-modern army. This is true virtually everywhere - large numbers of lowly conscripts, retainers, mercenaries, and adventurers are universally vital.

Britain in the waning years of Roman control was an unstable frontier, which would have naturally drawn opportunists hoping to win riches, glory, or even titles by whatever means they could manage.

One might compare it to the American West, or various gold rushes over the years - lots of people from all walks of life coming and hoping to make it big, most of them failing, some of them going back home, and others deciding to stay and make a life in the new lands. Only a very small number of people "struck it rich", and many of those people already had substantial resources to begin with, and simply expanded or transitioned their extant holdings to the new frontier.

So you likely had powerful lords adventuring for land and titles, who brought with them their retainers and conscripts to fight for them, and they also attracted mercenaries offering to tip the odds in their favor for gold, and of course the whole situation would have attracted bandits and pirates and simple war profiteers looking to get rich, or at least fight for scraps and leftovers...