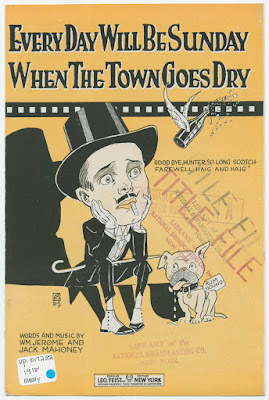 It's the 100th anniversary of nationwide prohibition in the US, so I am seeing essays all over marking that peculiar event. Pause to consider this: Prohibition was one of the most widely supported, easiest to pass amendments to our constitution since the original ten. On the first vote it was supported by 68% of the House and 76% of the Senate and was then ratified by 46 of the 48 states. The tide of support overwhelmed the many huge obstacles our system throws up to block change, sweeping the opposition away. Support was equally strong in New England and the Deep South, among Democrats and Republicans. In fact in most of the country the Federal laws that followed the amendment had no effect, because 32 states had already enacted their own bans on the sale of alcohol. Note that most of the prohibition-era laws applied to selling alcohol, not drinking it, so making your own and drinking it or giving it away remained a gray area mostly ignored by law enforcement.

And then fifteen years later the amendment was quietly repealed without much more opposition than it had met being enacted, and it was soon remembered as nothing more than a failure and a joke. What was that about?

As to why people opposed the sale of liquor, that seems obvious to me: because it has killed millions of people and impoverished millions more. None of the other drugs that we have at various times tried to ban has ever come close to the level of harm inflicted by alcohol. Of course it has also led to a a great deal of happiness, fun, and so on, but that is true of any drug people take for pleasure. Why, then, does banning alcohol seem ridiculous? And what does that say about the whole enterprise of government, and of all our attempts at moral reform? 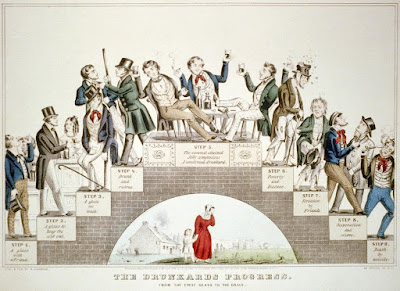 Historically the supporters of prohibition came from two camps: religious fundamentalists and progressives bent on bettering the lot of humanity. It was strongest where the two converged, that is, among the religious do-gooders who also created Abolitionism. Most of the leading abolitionists were in the Temperance camp: Lyman Beecher, William Lloyd Garrison, Ralph Waldo Emerson, and Frederick Douglass, who once wrote, "if we could but make the world sober, we would have no slavery." Abraham Lincoln was for temperance. But so was Teddy Roosevelt, coming from a very different tradition of "muscular Christianity" and an obsession with good health.

My eldest son was puzzled by this list of prohibitionists and asked, "Are they for freedom or against it?" Well, both, in certain circumstances. Just as they opposed the freedom to own slaves, they also opposed the freedom to profit from exploiting the addiction of alcoholics and impoverishing working families. In the world today the most active temperance movement is in rural India, where groups of women have been smashing up the unlicensed saloons where their husbands get drunk. Which rights are more important, those of the men to get drunk and the saloon keepers to sell to them, or those of the women and children to food and shelter?

But while I very much understand the impulses that drive prohibition, I don't support and doubt it could ever be made to work.

This takes my thoughts toward what humans are and what we can and cannot do. We cannot, it seems to me, be all that good. Some level of sin is essential to us. For many people, happiness depends on some sort of chemical that changes what it feels like to be alive. If we try to take that way we will likely fail, and the costs of that attempt will be high.

That is what the US found during Prohibition. At first the nation's consumption of alcohol declined quite a bit, but it didn't take long for gangsters and speakeasys to fill the void left by legal saloons. By the time Prohibition was repealed, consumption was higher than ever, or at least that's what FDR and other advocates for repeal claimed. Moonshine and bathtub gin also poisoned many people, more than 10,000 fatally. Al Capone was only the most famous of a whole army of rum runners whose violence led to a rise in the murder rate and a spreading feeling of danger.

One of the greatest challenges we face in organizing our societies is finding the line between what we can try to ban and what we have to accept. Because any attempt to reform us beyond what our weak hearts can stand will only fail and probably leave things worse than before.
Posted by John at 7:03 PM

I contend this isn't wholly true. Consider the effects that Phobition evidently had on things like popular culture.

There used to be the trope and stereotype of the casual heavy day drinker - a man stone cold drunk in the middle of the day, stumbling around to the point of not being able to keep his feet, utterly intoxicated to the point of hallucinating pink elephants. This stock character wasn't treated as a villain or a figure to be derided - he was seen as comedic relief, a source of wholesome good fun for the entire family.

In the stories he inhabited, he was a loveable oaf, not a shameful or infuriating disgrace as we would feel about him today. In his heyday, he was considered an ordinary and normal piece of the day to day world, notable only for being amusingly buffoonish. But these days, he virtually no longer exists in popular culture, and on the extremely rare occassion he is depicted it typically as a source of major drama.

Raging alcoholism used to be depicted as a more or less acceptable behavior, worthy only of mild ridicule. Today, it is viewed as a terrible disease at best and a sign of total moral bankruptcy at worst. And it's only after Prohibition was enacted that our view of this trope began to change, even if it tooks decades to do so fully.

I wonder if an examination of the forces motivating Prohibition would reveal a desire to reform the working class, with plenty of class and ethnic prejudice thrown in ("How do we make inner city Irish behave more like small town New England Congregationalists?"), while avoiding regulation of business (except the liquor business) and building a welfare state.

And I wonder if the process of Prohibition's failure split the reforming coalition in a way that reflects more our current divide, into a group devoted to keeping business unregulated and reforming behavior via moralistic condemnation of personal vices (the twenties consensus) on the one hand, and on the other a group that has decided that regulating business, building a welfare state, and moralistically condemning what it sees as structural vices (corporate greed, ethnic prejudice) are the ways to reform society--the latter group having concluded, indeed, that reforming society rather than individuals must be the way.

It would be interesting to follow the careers of some of Prohibition's big backers to find out where they were politically in, say, 1930 or 31.

@David - it is often said that Temperance included a large element of anti-immigrant sentiment.

What major socio-political movement of that era -didn't- include such an element?

I am here to give my testimony about Dr Ebhota who helped me.. i want to inform the public how i was cured from (HERPES SIMPLEX VIRUS) by salami, i visited different hospital but they gave me list of drugs like Famvir, Zovirax, and Valtrex which is very expensive to treat the symptoms and never cured me. I was browsing through the Internet searching for remedy on HERPES and i saw comment of people talking about how Dr Ehbota cured them. when i contacted him he gave me hope and send a Herbal medicine to me that i took for just 2 weeks and it seriously worked for me, my HERPES result came out negative. I am so happy as i am sharing this testimony. My advice to you all who thinks that there is no cure for herpes that is Not true just contact him and get cure from Dr Ebhota healing herbal cure of all kinds of sickness you may have like
(1) CANCER,
(2) DIABETES,
(3) HIV&AIDS,
(4) URINARY TRACT INFECTION,
(5) CANCER,
(6) IMPOTENCE,
(7) BARENESS/INFERTILITY
(8) DIARRHEA
(9) ASTHMA
(10)SIMPLEX HERPES AND GENITAL
(11)COLD SORE
HERPES. he also cure my friend from cervical cancer Email: drebhotasoultion@gmail.com or whatsapp him on +2348089535482