The news is full of crazy people. Grafton Thomas, the man who attacked a house full of Hasidic Jews with a machete, has been charged with “Hate Crimes,” but evidence is mounting that he is insane:


But on Sunday afternoon, a family friend, Taleea Collins, and Mr. Thomas’s pastor, the Rev. Wendy Paige, said that he had struggled with mental illness for two decades and had repeatedly sought help over the years. . . . Ms. Paige said Mr. Thomas had been diagnosed with schizophrenia.

I have written before that the intersection of mental illness with extreme ideology is a major threat to our safety, and here is another example.

But what should we do about it? The Rev. Paige says she


had struggled for years to understand why Thomas wasn’t institutionalized. “There hasn’t been anyone who has given a real solution to deal with a grown man who is dealing with schizophrenia, other than ‘Go home and call us if something happens.’”

Mitchell Silber, a former director of intelligence for the NYC police who has lately made himself an expert on antisemitic hate crimes, writes that


Failing to treat individuals with documented mental health issues is not an acceptable solution. 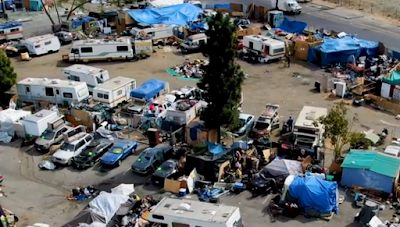 Meanwhile there has been lots of news about the ongoing homelessness crisis in California, with everyone from Donald Trump to the NY Times weighing in. The problem of shit, needles and trash on the streets of San Francisco is so bad that big tech conferences that used to be held there are moving elsewhere.

The Times rather predictably takes the tone that this is an economic problem, and they explicitly address it under the heading of inequality:


The path to becoming homeless can start with a large medical bill that causes someone to fall behind on their rent payments, which leads to eventual eviction. More than half of the people surveyed in Los Angeles cited economic hardship as the primary reason that they fell into homelessness. In San Francisco, 26 percent of the homeless surveyed cited the loss of a job as the primary cause. 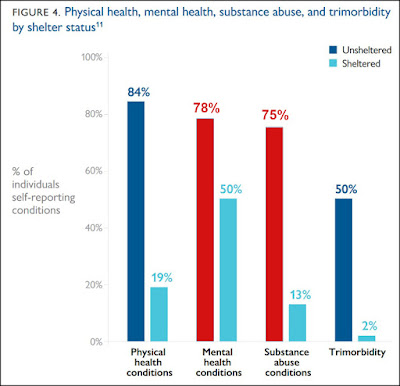 But really in California as everywhere else homelessness is very much enmeshed with mental illness. Statistics on homelessness are a mess because there are two kinds of homeless people: the kind who lose their homes through eviction or fleeing from abuse and then very quickly find new housing (the median length of stay in a US homeless shelter is one night), and the long-term homeless. The statistics above, from Kevin Drum at Mother Jones and therefore not likely to be a conservative hack job, show that most long-term homeless people have serious non-economic problems. Fully 78% have diagnosed mental health problems, and 75% have substance abuse problems; 50% have the trifecta of physical health problems, mental health problems, and substance abuse. Notice that alcoholics and drug abusers are especially unlikely to be found in shelters, because in a shelter they have a hard time getting high.

Take a look at the Times photo essay on a miserable homeless camp in Oakland; tell me that seems like a gathering of sane people.

This is not to say that economics does not play a role here; we have probably all known people with mental health or drug problems that might well have landed them on  the street if they did not have middle class families and other resources. I certainly have. It may well be true that some people end up homeless after losing a job; losing a job is traumatic for anyone, but for mentally ill people just holding it together it might be the shove that sends them over the edge. Housing costs and the shortage of subsidized housing may also be factors; again, struggles that people with good mental health might be able to manage might be too much for the mentally ill.

But to write about homelessness without mentioning mental health is just absurd.

That being said, what can we do about it? Better community health care is obviously thing one, and it might be enough to make a big dent in the problem. If you've ever tried to find good mental health providers who are taking new patients and your insurance, you know what a problem that can be even for middle class people. It must be ten times worse for poor people. California has spent billions over the past decade “fighting homelessness,” but I think they would have done better to invest in mental health care. My only hesitation is that since the need is so vast, it is hard to imagine how much money we might need to spend to provide decent mental health care for everyone.

And what about people who refuse care? Because this is a serious problem. “He was on medication for a while but didn't like it and stopped taking it” is a line in many mental health tragedies, including that of Grafton Thomas. Is there a solution to this beyond “Go home and call us if something happens”?

Some people have talked about re-opening state mental hospitals for long-term care, but that is very expensive and the last time we tried it the system was full of brutality and neglect. Several commentators have mentioned the number of mentally ill people in prison, with the idea, stated or not, that maybe they would be better off in mental hospitals. Maybe so, but most mentally ill people have not committed crimes that would get them long prison sentences, and we are a long way from being able to predict which ones are likely to. Scott Alexander, a psychiatrist, has written a long piece about why putting the mentally ill homeless in hospitals is a bad idea, and I recommend it for the curious.

So what is the answer? I honestly don't know. But it seems to me that if we want a world in which everyone who wants one has a home, we first need to invest in mental health care, and if we want to protect our public spaces from being overrun by crazy people who yell at us, we may need to violate a few rights.
Posted by John at 7:40 AM

The obvious middle ground, as you allude to later in your post, is to make mental healthcare available to anyone who wants it. We need to solve our massive homelessness crisis. We need to get people out of poverty. These negative conditions promote and perpetuate mental illness, so we must alleviate or eliminate them to whatever extent is possible.

We can't have a reactionary mindset, we have to be preventative. The best way to prevent crimes by the mentally ill is to prevent mental illness itself. If we're squeemish about locking up people who only might be a threat, then we need to be doing everything we can to ensure people never get that far along - that their problems are handled before there is even a chance of them being a threat.

You have a homeless man who is schizophrenic, and you think he might potentially be a danger to people, but you don't want to lock him up until it's unquestionably plain and obvious that he's a threat? Then give him a decent house; give him a decent job; give him decent food; give him all the medical attention he could possibly need; give him assisted living; help him to be stable and healthy, and surround him with people who can monitor him for worsening of his condition and intervene before he does become a threat to himself or others.

Until we start investing in our own society, it's going to keep slowly falling apart.