Gaston Leroux, The Phantom of the Opera 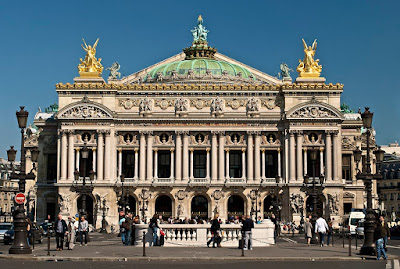 I've just finished Gaston Leroux's 1910 novel, The Phantom of the Opera, and I enjoyed it. It is, as my elder daughter put it, an archetypal Gothic tale. Like Casablanca or the first Star Wars, it succeeds by touching on absolutely every relevant cliché. It has a monstrous, tragic antihero, a beautiful, innocent heroine, a mysterious oriental, a clueless young man trying to stop a chain of events he does not understand, secret passages, rivalry among divas, trap doors, poisons, strangulations, even a torture chamber called "the torture chamber." If you are seeking something diverting and escapist to read or listen to I highly recommend it. 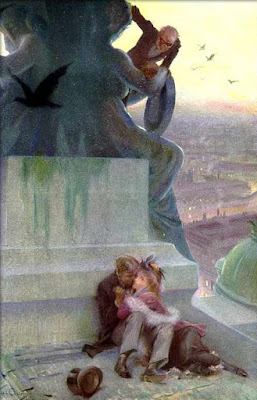 The tale is presented by a narrator who claims to have worked out these events by dogged investigation, and some of what you read is extracts from documents he discovered during his research. Leroux spent some years as a reporter, after he gambled away his inheritance and suddenly had to work for a living, and the structure works well. I have been intrigued by the ways this story incorporates bits of fact, not so much because I believe Leroux's reported insistence that the whole thing might be true as for what it says about how writers are inspired. The tale is set in the Paris Opera (top), which was built from 1861 to 1875. Part of the reason it took so long was that the workers dug down into an underground pool of water that they somehow had to control; they ended up taming it into a sort of lake in the bottom of the structure. This lake is still there and was long used to train rescue workers to swim in the dark. To contain the lake they built double foundations, one as it were facing to the water and one toward the outside, and from an early date there were rumors about what was in between those walls. (Officially and most likely, rock fill, but still.) 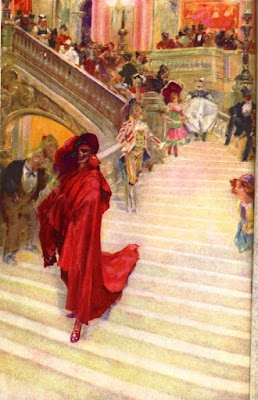 The building was still under construction when France was humiliated in the Franco-Prussian War of 1870. In the aftermath of that defeat the workers of Paris rose in a revolt and formed a government they called the Commune that only lasted two months but still looms large in the Marxist imagination. Leroux has it that the deep basement of the Opera was used by communards as a prison, and why not? They certainly did imprison more people than the jails could hold, and records of their reign are extremely sketchy, and even if it did not happen you can certainly believe that people who worked in the Opera said it had.

And of course the Opera was said to be haunted -- what grand old building is not said to be haunted? -- and Leroux said he heard Opera workers blaming mishaps on the ghost. While the great chandelier itself did not really fall onto the audience as it does in the book, one of its massive counterweights did, killing a patron, and Leroux said he was told this was the work of the ghost.

So here is my formula for crafting a Gothic tale: take a great old building or site that has dramatic events in its past and is already rumored to be haunted, preferably one that your audience knows well. Play up the mysteries of the building, the forgotten rooms sealed off in past restorations, the dark basements, the high roof. Insert a tragic antihero and an innocent, beautiful woman and surround them with other stereotypical characters: bluff policemen, flamboyant opera directors, gossiping fans, fools in love. Run everyone through a very basic, old-fashioned plot with at least one sad death. Insist that everything might be true. Behold! If your evocations of the place and the pitiable damnation of your antihero ring true enough, you might have a hit on your hands.
Posted by John at 8:09 AM