Thomas and Emily: a Love Story 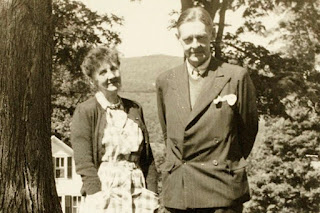 T.S. Eliot, one of the greatest poets ever to write in English, lived a singularly unhappy life, built around a miserable marriage to Vivienne Haigh-Wood. But before he met Haigh-Wood, he spent two years in the US taking a doctorate in philosophy at Harvard. In 1912 he met and began a relationship with Emily Hale, then an undergraduate at Smith College. She thought they had, as they said, an understanding, but after his return to England he quickly met and married Haigh-Wood.

Yet Eliot never lost touch with Hale, and as the boundless impossibility of his marriage grew ever clearer he reached out to her more and more. They exchanged hundreds of loving letters, which have now, fifty years after Eliot's death, finally been released to the public. After seeing Hale in 1930 he wrote,


You have made me perfectly happy: that is, happier than I have ever been in my life; the only kind of happiness now possible for the rest of my life is now with me; and though it is the kind of happiness which is identical with my deepest loss and sorrow, it is a kind of supernatural ecstasy. . . . I tried to pretend that my love for you was dead, though I could only do so by pretending myself that my heart was dead; at any rate, I resigned myself to celibate old age.

Haigh-wood died in a mental institution in 1947. Hale thought that with the marriage finally over, she and Eliot would get together. But no; Eliot told her, he wrote later, that after his wife's death he realized that he had only been in love with “the memory” of Hale, and he had no interest in resuming a relationship with her as they now were.

In 1956 Hale donated 1,100 letters she had received from Eliot to Princeton with the proviso that they not be opened until 50 years after hers and Eliot's deaths. Eliot was enraged by the news and issued a statement that pretty much denied everything. Among other things he wrote that is he had married Hale when he was young,  he most likely would have become a mediocre philosophy professor.


Emily Hale would have killed the poet in me. Vivienne nearly was the death of me, but she kept the poet alive.

Which may even be true; certainly Eliot's poetry seems to spring from a very unhappy place, or perhaps from a desperate struggle against sadness. It's as if he were saying,


Sorry, but being married to you would have made me too happy and killed my art.

Of course it also might not be true; one of the Eliot scholars contacted by the Times said,


My theory is that he couldn’t bear the thought of being happy. I think he really did love Emily, but he was too scared of developing a relationship.

I give the last word to my eldest son, who said, "that's why you never get involved with poets."
Posted by John at 12:16 PM