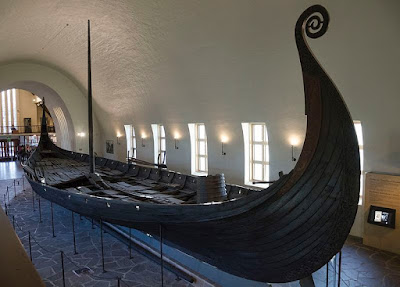 In about 834 CE, a Viking queen was buried in Norway. She was laid to rest with an astonishing array of goods, including the amazingly beautiful ship, four carved animal-head posts, three beds, a cart or wagon, and much more. The femininity of the queen was acknowledged with a huge array of objects related to womens' work: several looms and a whole suite of tools for working cloth, from shears to spindles to needles. 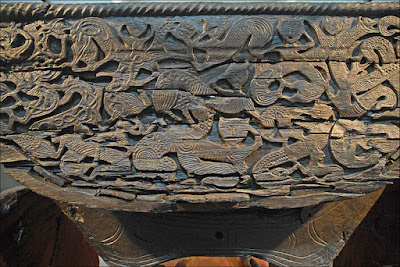 One end of the cart was decorated with cats, sacred to the goddess Freya. 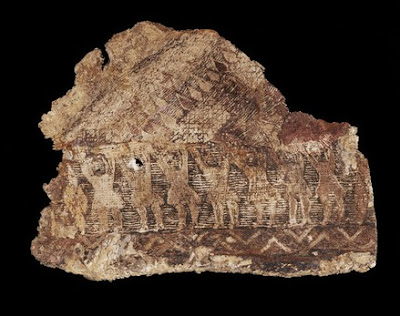 And what I want to write about today, an amazing array of textiles. The textiles included everything from raw materials – skeins of thread, bundles of silk ribbon – to complete and highly elaborate tapestries. Some of the material had almost completely disappeared, especially that woven of flax. But some survived well enough that we can puzzle out what it depicts. Note that I am interested in what these tapestries depict; if you want to read about how they were made, see here. 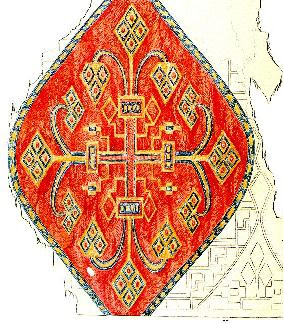 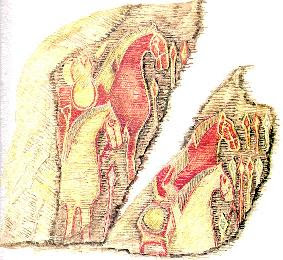 More than 900 fragments were recovered from the burial. These images are watercolors by Sofie Kraft, who drew and painted many of the fragments in the 1910s. 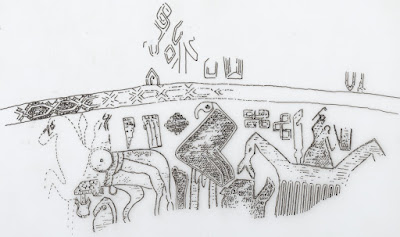 The central character here is usually interpreted as a human in bird costume. 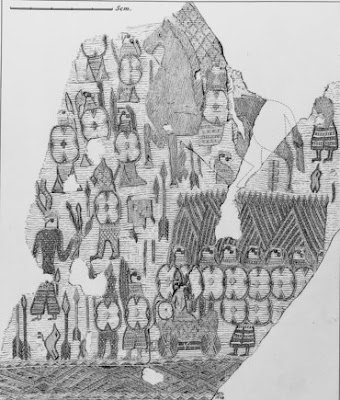 This one includes two famous figures, The Horned Man with Crossed Spears Confronts the Man in a Bear Skin. 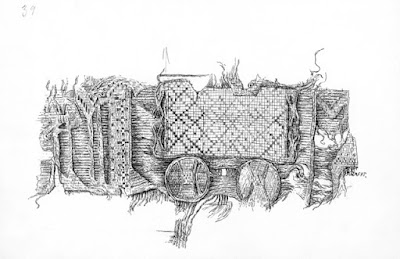 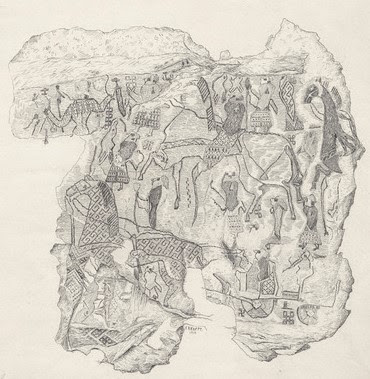 Besides all these fragments, substantial parts were found of two large tapestries. One is called The Wagon Procession. 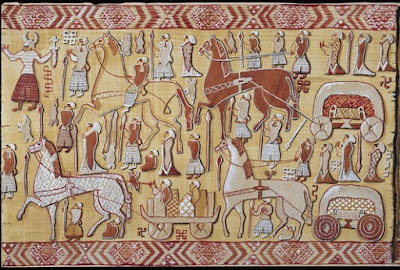 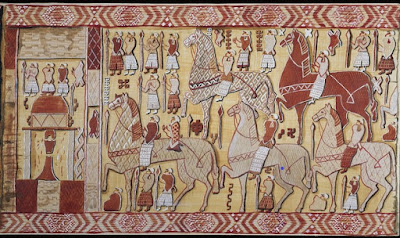 Many pieces survive, so the reproductions one sees all over the place (you can buy a replica in the museum gift shop) are fairly authentic. These paintings were done by Mary Storm in 1940. Notice the figure in the upper left of the top image wearing a horned helmet. So the next time somebody says to you, "Vikings never wore horned helmets!" casually mention that while the figure from the Oseberg tapestries is thought to represent Odin, it is wearing a horned helmet. 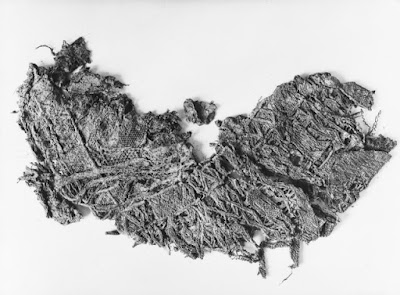 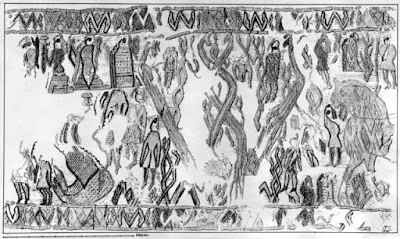 Then there is this work. 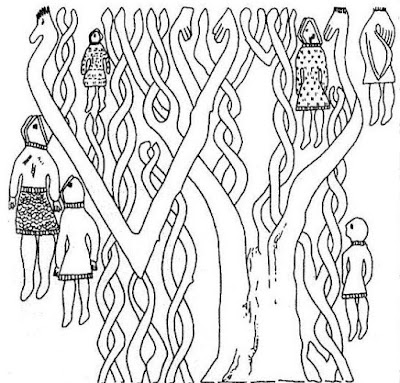 It is thought to depict a sacrificial tree, hung with corpses, as in this interpretation. Notice that the tops of the large branches have been carved into horses' heads; does that make the tree a representation of the world tree Yggdrasil, Odin's Steed? Adam of Bremen's chronicle describes something like this practice:


It is customary also to solemnize in Uppsala, at nine-year intervals, a general feast of all the provinces of Sweden. From attendance at this festival no one is exempted Kings and people all and singly send their gifts to Uppsala and, what is more distressing than any kind of punishment, those who have already adopted Christianity redeem themselves through these ceremonies. The sacrifice is of this nature: of every living thing that is male, they offer nine heads with the blood of which it is customary to placate gods of this sort. The bodies they hang in the sacred grove that adjoins the temple. Now this grove is so sacred in the eyes of the heathen that each and every tree in it is believed divine because of the death or putrefaction of the victims. Even dogs and horses hang there with men. A Christian told me that he had seen 72 bodies suspended promiscuously. Furthermore, the incantations customarily chanted in the ritual of a sacrifice of this kind are manifold and unseemly; therefore, it is better to keep silent about them.

The overall impression is that most of the works depict ritual scenes: processions of wagons, processions of costumed figures, stylized combats, sacrifices. Since the tapestries from this grave are most of those that survive from 9th-century Scandinavia, we don't know if this was the usual subject matter of Viking tapestries, or if it was considered appropriate for funerals, or if it was the particular taste of this queen. But they are a wonderful source for imagining Viking religious life.
Posted by John at 7:06 PM

So the next time somebody says to you, "Vikings never wore horned helmets!" casually mention that while the figure from the Oseberg tapestries is thought to represent Odin, it is wearing a horned helmet.

Yes, obviously there are weird artistic depictions of "horned" or "winged" helmets like these - where else would the trope even come from?

The trouble is, the popular imagination lacks nuance, and it lead to people thinking that actual Vikings - not merely Viking depictions of Odin or other mythological or ceremonial figures - actually wore such helmets, and then that's how the Vikings themselves get imagined and represented in our own culture.

No one says, "The Vikings never depicted Odin or similar figures with weird helmets that appear to have horns or maybe wings, we're not entirely sure to be honest."

They say, "The Vikings themselves, the actual people, never wore such weird helmets as far as we can tell, so can you please stop depicting them that way?"

We've actually found "horned" helmets from Scandinavia, but they're Bronze Age celtic examples that predate the Vikings by three quarters of a millenia or more and are clearly ceremonial. Also, similarities can be drawn to helmets from other cultures and times, such as the medieval Japanese and the Mughals.

The misconception of Vikings wearing horned helmets is frustratingly prevasive - it's been around since the later 1800s, and you do a disservice to history to protect it in any way.

There is no need to "Well, actually..." this particular issue. Anyone who is educated or interested enough to even be aware of these depictions in Viking art is also smart enough to understand the distinction between them and what Vikings themselves actually used and wore into battle.