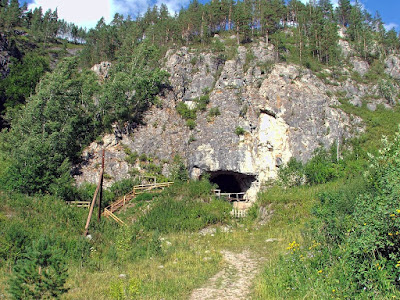 Back in 2010, geneticists announced that a finger bone from Denisova Cave in Russia's Altai Mountains represented a new species of humans. They have been dubbed Denisovans after their discovery place, and genetic studies done since then show that modern Asians carry some of their genes. They visited the cave between 48,000 and 30,000 years ago.

That remarkable discovery inspired archaeologists to redouble their efforts in the cave, and the result has been a haul of several thousand bone fragments, most too small for even the species to be identified from the shape. More than 2,000 fragments were sent to the Max Planck Institute in Germany, one of the top three ancient DNA labs, but even they were unable to find usable material in most of the bones. The did identify one 120,000-year-old toe bone as Neanderthal. Then they got to work on a sliver of arm or leg bone that showed traces of hominid collagen:


Viviane Slon, then a graduate student at the institute, led a search for DNA in the fragment. She began by hunting for a special set of genes found in the fuel-generating factories of the cell, called mitochondria.

Mitochondria carry a set of genes distinct from those of the cell’s nucleus; these genes, unlike those in the nucleus, are inherited solely from the mother.

In 2016, Dr. Slon and her colleagues reported that they had gotten mitochondrial DNA from the mysterious bone fragment, and that it closely matched genetic material from Neanderthals.

The researchers called that individual Denisova 11, and they began searching the bone for nuclear DNA. Fragment by fragment, they began reconstructing the entire genome.

Strangely, only some of the fragments of nuclear DNA matched Neanderthal genes. There was just as much Denisovan DNA in the bone.

“I was wondering, ‘What did I do wrong?’” recalled Dr. Slon, now a postdoctoral researcher at the institute.

In each pair of chromosomes, one came from a Neanderthal, the other from a Denisovan. This individual, she and her colleagues concluded, was a hybrid. 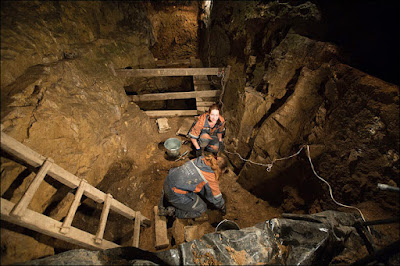 Astonishing: so many thousands of years later, to catch interspecies mating almost in the act. This young woman had a Denisovan father and a Neanderthal mother. The DNA showed that her father was from the local Denisovan clan, related to the other Denisovan specimens that have been identified. Her mother, though, was not closely related to other Neanderthals from the Altai, but to specimens found in Croatia.

In so many ways, the last Ice Age was a fascinating time. Giant mammoths and other strange beasts roamed the icy plains, hunted by saber-toothed cats and dire wolves. Among them wandered small bands of humans of at least three different species, all of them far-travelers who criss-crossed Eurasia as the climate shifted and the herds migrated. On their travels, they must have regularly encountered other kinds of humans. I suspect that our ancient legends of beast men may got back to those times, preserving memories of those meetings. Sometimes, it seems, sex was part of those encounters. What sort we have no idea; perhaps it was all rape. But perhaps some took place when small bands, living at the edge of survival in a decade frigid even by Ice Age standards, or a time of rapid change that ruined their hunting routines, came together to help each other survive.

I foresee a novel about modern human and Denisovan lovers, each the only survivor of his or her band, no language in common, meeting up in a cave refuge and helping each other through winter, slowly learning to trust each other until desire breaks through.
Posted by John at 7:38 AM