Steppes Invaders, the Indo-European Languages, and the Origin of Origins 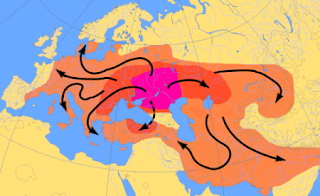 Modern genetic studies have confirmed what archaeologists believed in the 19th century: that Europe was invaded in the Bronze Age, around 2500 BCE, by peoples from the eastern European steppes. This invasion was originally postulated to explain the spread of Indo-European languages, and the genetic confirmation of the entry of steppes peoples has now made this view common again.

But wait – where did the steppes invaders come from? 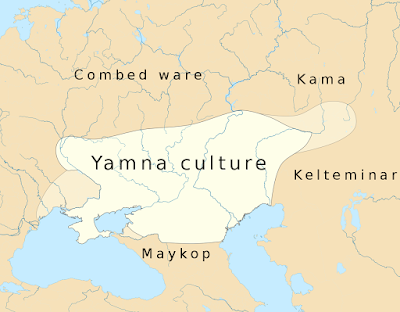 The source culture of the invaders is called Yamnaya, a neolithic culture that dominated the steppes north of the Black Sea between about 3,500 and 2300 BCE. Obviously they didn't spring into existence from nowhere; who were their ancestors?

Now there is a major new genetic study (Mathieson et al. 2017) that offers some insight into the problem. They argue as follows:


Steppe-related ancestry itself can be modeled as a mixture of EHG [Eastern Europe Hunter-Gatherer] -related ancestry, and ancestry related to Upper Palaeolithic hunter-gatherers of the Caucasus (CHG) and the first farmers of northern Iran.

Remember that the Yamnaya culture was Neolithic, which means that they had pottery and practiced some agriculture. Mainly they were pastoralists, moving around a lot and living off their animal herds. They did not invent farming, herding or pottery themselves, but adopted them from the Middle East. Farming was spread into Europe by a massive migration of farmers, and it presumably made it to the steppes in the same way. So both genetically and culturally the steppes people derived in part from the early farming cultures of the Middle East. Most evidence suggests that the spread of farming and farmers happened from Iran through the Caucasus. However, Mathieson et al. complicate the picture:

The pastoralist Bronze Age Yamnaya complex originated on the Eurasian steppe and is a plausible source for the dispersal of steppe-related ancestry into central and western Europe around 2500 BCE. All previously reported Yamnaya individuals were from Samara7 and Kalmykia15 in southwest Russia, and had entirely steppe-related ancestry. Here, we report three Yamnaya individuals from further West – from Ukraine and Bulgaria – and show that while they all have high levels of steppe-related ancestry, one from Ozera in Ukraine and one from Bulgaria (I1917 and Bul4, both dated to ~3000 BCE) have NW Anatolian Neolithic- related admixture, the first evidence of such ancestry in Yamnaya –associated individuals. Two Copper Age individuals (I4110 and I6561, Ukraine Eneolithic) from Dereivka and Alexandria dated to ~3600-3400 BCE (and thus preceding the Yamnaya complex) also have mixtures of steppe- and NW Anatolian Neolithic- related ancestry.

Got that? So while it looks like the Yamnaya culture of the steppes was the source of a major migration west into Europe, the Yamnaya culture included people who had come in the opposite direction, east from Europe out onto the steppes. These were Neolithic farmers who entered Europe from Anatolia around 6500 BCE. This is a small sample to support much in the way of conclusions, but even these few skeletons prove that such movement did occur. There is also now evidence that ancient hunter-gatherers from western Europe contributed genes to the steppes culture, perhaps because they had been driven out of western Europe by Middle Eastern farmers.

None of that changes the basic formula of a Bronze Age migration from the steppes into Europe; the study confirms the existence of a clearly defined "steppe-related ancestry" that can still be identified in modern Europeans. But while that group is genetically distinct from Europe's first farmers, it included some genes from those farmers, as well as many more genes from the farming people of northwest Iran and the Caucasus. It's complicated, making it harder to identify particular genes as deriving from the steppes invaders, the first farmers, or the ancient Hunter-Gatherers.

And now the real question: where did the original Indo-European language come from? Did it derive from an ancient language of the steppes zone, once spoken by Paleolithic hunter-gatherers? Or did it perhaps reach the steppes with migrants from Iran or even Anatolia? Right now the online forums where people argue these questions are burning up with speculations and denunciations. But with genetic data coming out so fast, we should be much better placed to answer them in a few years.
Posted by John at 1:58 PM