The Bell Beaker Invasion of Britain 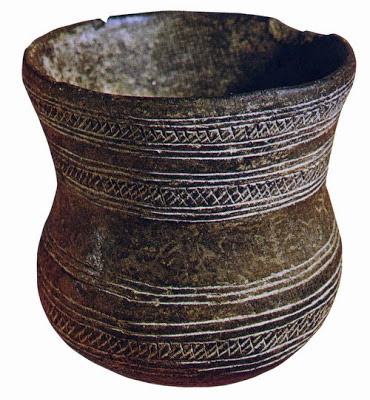 I have written here before about the Bell Beaker phenomenon, which spread across western Europe at the very end of the Neolithic period, around 2800 BCE. At this time the use of copper was fairly common, so this is sometimes known as the Copper Age, but in fact most tools and weapons were still stone or bone. The name comes from their distinctive pottery vessels, one of which is above. 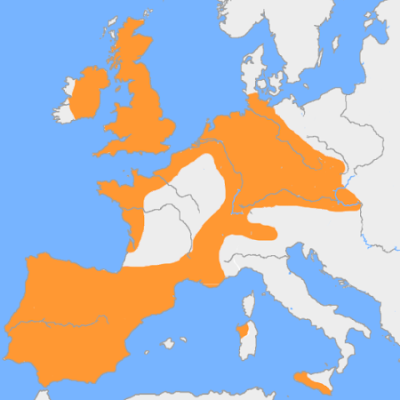 The range of the Bell Beaker culture.

Across much of its range Bell Beaker culture seems to be intrusive. In some places it has been found almost entirely in cemeteries, which are next to village settlements that seem completely unchanged. However a case can be made that it emerged from the local culture in two separate places, Portugal and the Netherlands. Archaeologists still argue over which is the Bell Beaker "homeland" and how the two are related, although the latest data seems to show that the beakers of Portugal are older by at least a century. There is also a raging argument about how the culture spread beyond those homelands: invasion or imitation? I reported back in 2015 on genetic data that suggested violent invasion and partial replacement of native populations.

Now there is a much bigger, better study of European DNA in this period, which you can tell is science because the list of authors fills most of the first page. This goes by the name of Olalde et al. The study is based on high-quality DNA profiles from 170 individuals, 100 of them clearly part of the Bell Beaker culture.

The study shows three very interesting things. First of all it shows that before the spread of the Bell Beaker Folk, the Neolithic inhabitants were closely related to each other across the whole Atlantic seaboard from northwestern Spain to northern Scotland. This is the zone of the great Neolithic monuments, and archaeologists have long speculated that these people must have been connected to each other. Now there is genetic data showing that they were related.

The second thing is that the people of the two early Bell Beaker cultures, in Portugal and the Netherlands, were not closely related. So however the culture spread between those two places, it was not by colonization or some other kind of genetic replacement. The Beaker people of the Netherlands had a very high proportion of steppes ancestry, so they originated in the great migration from the Ukraine into the west that probably spread Indo-European languages. The Iberian Beaker folk, on the other hand, had very little steppes ancestry. 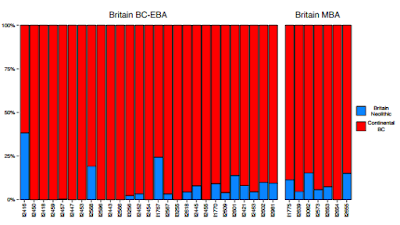 The third thing, which is what has gotten the headlines, has to do with the population of Britain and Ireland. The British data is based on 80 skeletons dating to between 3900 and 1200 BCE:


We next investigated the magnitude of population replacement in Britain by modelling Beaker Complex and Bronze Age individuals as a mixture of continental Beaker Complex (using the Oostwoud individuals as a surrogate) and the British Neolithic population. Fig. 3a [above] shows the results of this analysis, ordering individuals by date and showing excess Neolithic ancestry compared to continental Beaker Complex as a baseline. For the earliest individuals (between ~2400–2000 BCE), the Neolithic ancestry excess is highly variable, consistent with migrant communities who were just beginning to mix with the previously established Neolithic population of Britain. During the subsequent Bronze Age we observe less variation among individuals and a modest increase in Neolithic-related ancestry (Fig. 3a), which could represent admixture with persisting populations with high levels of Neolithic-related ancestry (or alternatively incoming continental populations with higher proportions of Neolithic-related ancestry). In either case, our results imply a minimum of 93±2% local population turnover by the Middle Bronze Age. Specifically, for individuals from Britain around 2000 BCE, at least this fraction of their DNA derives from ancestors who at 2500 BCE lived in continental Europe.

This is only 80 skeletons, and in this period the surviving burials probably skew toward people of high status. But the evidence is stark: Britain's Neolithic inhabitants left few Bronze Age descendants. In the graph above, the oldest individuals are on the left, and later ones on the right; you can see that by the Middle Bronze, after 2000 BCE, the population seems to have settled down around 80% invader. 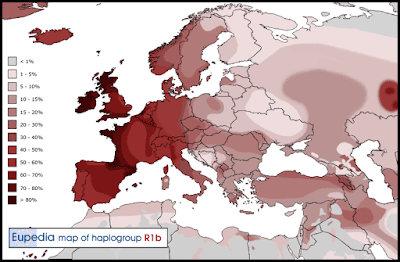 As I said, that is just one study of 80 people, probably biased toward the elite. But there is another line of evidence that indicates major population change in this period, the Y chromosomes. It has long been known that most modern men of Atlantic Europe have Y chromosomes that fall into the R1b haplogroup. In Ireland and Britain more than 80% of men fall into this clade. So far there is no evidence at all of R1b in Neolithic Britain or Ireland, and the new study confirms this:


An independent line of evidence for population turnover comes from Y-chromosome haplogroup composition: while R1b haplogroups were completely absent in the Neolithic samples (n=25), they represent 95% and 75% of the Y-chromosomes in Beaker Complex-Early Bronze Age and Middle Bronze Age males in Britain, respectively.

Until somebody finds R1b in a Neolithic skeleton, it will be impossible the refute the argument that the Neolithic populations of Britain and Ireland have been largely replaced by invaders.

The arrival of Bell Beakers in Britain and Ireland was an extension of the great migration from the steppes that dramatically changed the population of western Europe and probably replaced most of the languages. However it seems to have been much worse for the invaded than most of this expansion.

As to how the Beaker Folk were able to leave so many descendants, remember what I wrote before about the plague. Up to 10 percent of the skeletons from the source population of Europe's Indo-European invaders, the Yamnaya of Ukraine, had Yersinia pestis in their bones, the bacteria that causes bubonic plague. It seems likely to me that when they spread west they brought the plague with them, and that it caused terrible mortality in populations with no resistance. The invaders would have had some resistance, helping them to take over areas devastated by the plague. If the Beaker Folk brought the plague to Britain and Ireland, that could explain a lot of the later genetic history of the islands.
Posted by John at 7:39 PM